The Pittsburgh Pirates announced the passing of Gene Clines, outfielder for the 1970-74 Pirates. He was 75 years old.

It is with heavy hearts that we confirm the passing of former Pirate Gene Clines.

Gene was part of the first all-minority lineup in Major League Baseball history. We send our deepest condolences to the Clines family at this time. pic.twitter.com/PHcA9R5EVy

The Pirates issued a statement via team president Travis Williams: 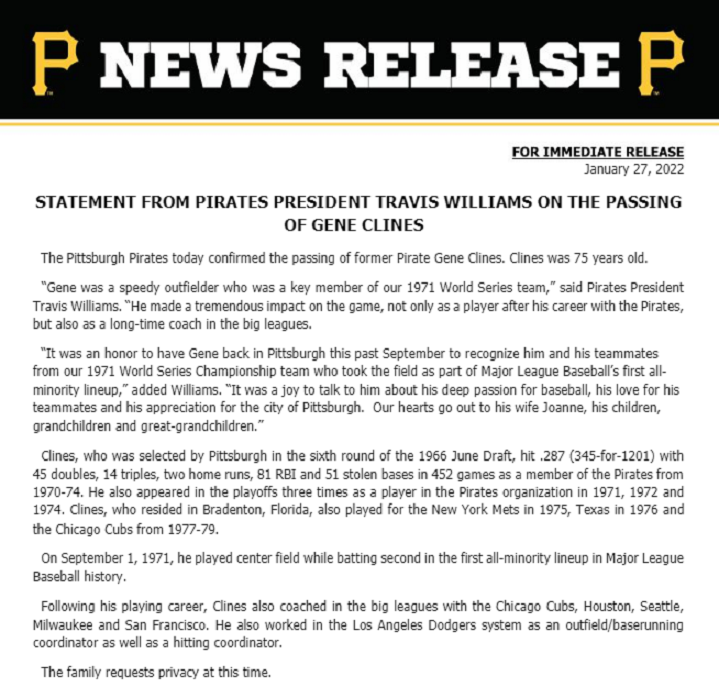 Here’s our bio from the site, which was last updated on his birthday:

Gene Clines, outfielder for the Pirates from 1970 until 1974. He was drafted by the Pirates in the sixth round of the 1966 draft. He played four seasons in the minors, making it up to Double-A, before getting promoted to the Pirates mid-season in 1970. Clines started in the Appalachian League, where he batted .358 in 52 games at 19 years old. He moved up to Raleigh of the Class-A Carolina League in 1967, hitting .259 with 15 extra-base hits in 83 games. The next year saw him just to Double-A, playing for York of the Eastern League. He hit .241 with 23 steals and a .588 OPS in 137 games. He was with York again in 1969 and hit .268 in 135 games, with 23 extra-base hits, 86 runs scored and 63 steals in 75 attempts. The Pirates affiliate moved to Waterbury in 1970 and Clines hit .310 with 28 extra-base hits and 32 steals in 95 games before joining the Pirates in late June. Being used mostly as a pinch-hitter during his first big league shot, he batted .405 in 31 games. That earned him a spot for the following season, which turned out to be the fourth World Series winning season for Pittsburgh.

During that 1971 season, Clines batted .308 with 15 steals and 52 runs scored over 97 games. He saw most of his playing time in center field, though he also got occasional starts in left field and right field. He went 1-for-3 in the NLCS with a homer, then went 1-for-11 in the World Series. The next year he hit .334 in 107 games and received some mild MVP consideration. He was mostly a singles hitter at the time, with no homers, 17 RBIs and a low walk rate, but the high average led to 52 runs scored and a career best .790 OPS. He mostly split his time in 1972 between the two corner outfield spots, though the 1973-74 seasons saw him spend more of his time in center field. Clines saw his average drop to .263 in 110 games in 1973, with 42 runs scored and a .656 OPS. That OPS dropped down to .557 in 107 games the next year. After hitting just .225 with six extra-base hits in 107 games during the 1974 season, he was traded to the New York Mets for catcher Duffy Dyer.

Clines’ one season in New York didn’t go well, with a .227 average, 27 runs scored and four steals in 82 games. He was traded to the Texas Rangers in December of 1975 and he hit .276 with 52 runs scored, 38 RBIs and 11 steals in 116 games. He had 480 plate appearances that season, which was 143 more than his next highest season total. Clines was traded to the Chicago Cubs prior to the 1977 season. He hit .293 with a career high 41 RBIs in 101 games in his first season in Chicago. His .756 OPS was easily his best mark since his 1972 season. The offense fell off the next year, with a .258 average, 17 RBIs and 31 runs scored in 109 games, though he saw a lot of that time off of the bench. His pro career ended when he was released a month into the 1979 season, going 2-for-10 with two singles in ten games, all as a pinch-hitter. Clines batted .287 in 459 games with the Pirates, with 51 stolen bases and 179 runs scored. He was a career .277 hitter with 314 runs, 71 steals and 187 RBIs in 870 big league games over ten season and he managed to collect just five homers total, three coming with the Chicago Cubs in 1977. Clines only homered in two parks, hitting all three in 1977 at Wrigley Field, while his two with the Pirates came at Dodger Stadium two years apart. After his playing days, he took up coaching and remained active in baseball until 2012. In 1989, he returned to play, taking part in the upstart Senior Professional Baseball Association’s inaugural season.