Many of you looked at the title and instantly had question marks floating over your head. Isn’t this a Pittsburgh Pirates Card of the Day feature? Why does it have the word bazooka back-to-back in the title? And many other odd questions that I will hopefully answer. I’m here to tell you that this is a Pittsburgh Pirates card, the word bazooka used back-to-back is correct, and I thought it would be interesting to do an oddball card today. Part of the reason is that today’s history article only had one player mentioned (Pascual Perez) with card options that show him on the Pirates, and we have already had him featured in this series. So I decided to just search around Ebay until I found something oddball to feature here today instead. I came up with this particular card from 2003, which was a joint venture between Topps and Bazooka (Topps actually produces Bazooka, so it’s just a combo of products). Today’s card pictures Bazooka Joe, the popular mascot for Bazooka bubble gum. The twist here is that he is pictured on a card that appears to show him as a member of the Pittsburgh Pirates. 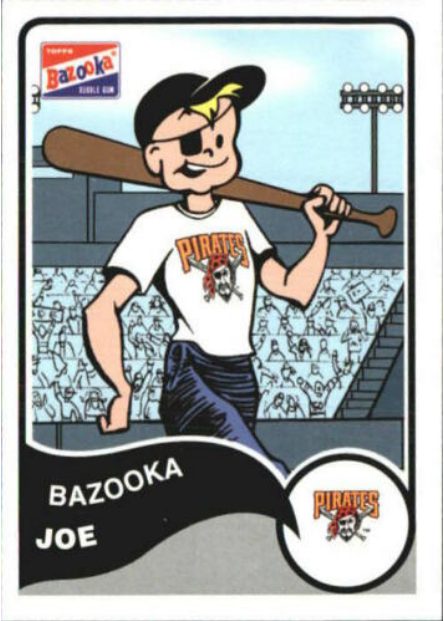 If you know anything about Bazooka Joe, you know that he always has an eye patch (I believe it was a shaving accident), making the Pirates the perfect team to show him on in this set. However, you can find him pictured with all 30 teams in the set. Obviously the Pirates card is the best one, but the others still exist for some reason. For what this is, an oddball/novelty card, I actually like the look of it. Not enough to buy one for the current Ebay prices (see below), but maybe if one is cheaper I’ll get it. The two Pirates logos on the front of the card really sells it for me, and I have read some Bazooka Joe comics in my life, so that helps.

The set consisted of 280 regular cards, along with the 30 team cards featuring Bazooka Joe and another 20 logo variation cards. There were also silver versions and mini versions of each card, which was tougher to find for specific players, but they each came one per pack, so they weren’t hard to find. There were also some other inserts that were harder to find. I like that they included 24 Bazooka Comics in packs, with the chance of finding one being one every four packs. 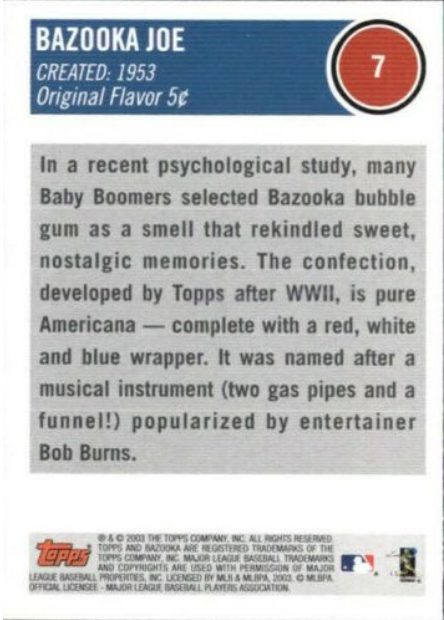 The back of this card disappoints a little. I thought maybe there would be a comic, or a scenario where he’s on the Pirates with some player named Chewing Gum Murphy, and they win the World Series. They don’t even say what position he plays. This is just Bazooka facts. Put those on the other 29 teams!

Maybe you want this card, who is to say. If you grew up on Bazooka Joe comics and gum products, then it might be cool seeing him wearing Pirates gear. There are just three options on Ebay right now and all of them have higher shipping charges than card costs. The lowest priced one is $4.49 delivered, with $3.50 of that being shipping costs. One person is selling one auction with all 30 teams, and it’s going for $19.50 delivered. While I don’t know if it’s a bargain, it certainly looks that way compared to the auctions for the solo card.