Today’s Card of the Day comes from a set that I consider to be very important. Baseball cards were very popular during the 1887-89 time period, then the production of them died off for the most part until around 1908. There are exceptions to that statement, but not many, and a majority of those exceptions are extremely rare sets. So in my mind, anything produced during that time period is important because those years are extremely underrepresented in baseball card history.

The 1895 N300 set from Mayo’s Cut Plug has 48 different cards that feature 40 different players and eight variations. One of the cards with a variation is Jack Glasscock, which we featured here in October of 2020. That was the only other time the Mayo set has appeared in this series. This set won’t be a regular feature because Kinslow is the only other Pirates player in the set. He’s being used here today because the Pirates acquired him on this date in 1895, with Pittsburgh manager Connie Mack saying in the local papers that he believed that they acquired the best catcher in baseball at the time. The ironic part about that statement is that Kinslow struggled with the Pirates and got replaced by Mack himself. Kinslow didn’t last the whole season in Pittsburgh, which is likely why he has a variation in this set. 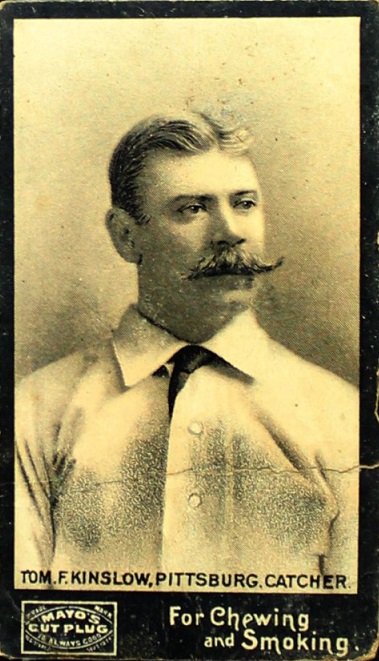 This variation for Kinslow is called the “no team” variation. Of course you see Pittsburg (no H at that time) in writing between his name and position at the bottom of the photo, but the “no name” refers to Pittsburg not being written on the jersey.  The other version of this card has PITTSBURG written across the front of the jersey.

Almost every card in the set has the same basic look of a chest up photo with the player looking off to one side. For some reason, Hall of Fame outfielder Hugh Duffy was able to get a batting pose, while his Hall of Fame teammate in the outfield, Tommy McCarthy, has a waist up portrait style pose, with his arms visible. The variations of the looks with everyone else are minimal in difference, with some players in street clothes and some are in uniform with hats. Another Hall of Famer named Wilbert Robinson (Pirates fans should know the name if they know anything about Rennie Stennett) has a portrait style photo, but for some reason only his face is on the card and the rest is airbrushed out.

The name Mayo’s Cut Plug comes from an old tobacco brand, while the N300 number in the name is just a catalog number that was given out many years after the set was produced. The “N” part stands for 19th century and the 300 number was randomly chosen by the man (Jefferson Burdick) who cataloged all of the sets back then.

The back is blank, but I’m including a scan of it anyway, because it’s one of the better blank backs (when it’s in nice shape of course): 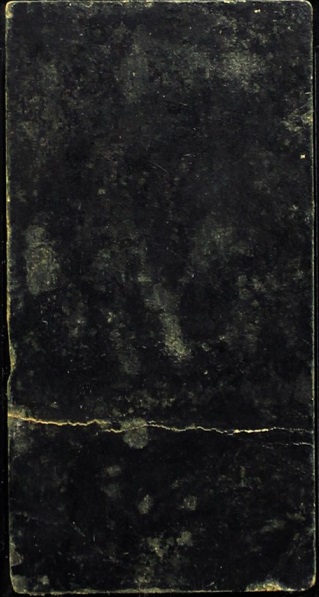 If you are interested in this card, you either need deep pockets or patience. The only on on Ebay right now is the one in the scan above, being sold by Dean’s Cards. It grades as an SGC 1.5 and the asking price is $1,940. There is good news if you like this card, but don’t want to spend big bucks. They sell reprints of the card from a set that was quality made and they go for about $6, with two options on Ebay right now.