On August 15, 1884, the Pittsburgh Alleghenys defeated the Baltimore Orioles by a 5-3 score. Here’s the boxscore proof of this game: 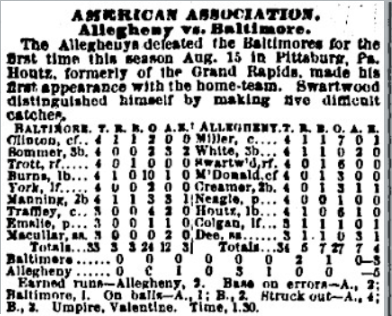 Here’s something also interesting. Part of the season recap from Retrosheet for the 1884 Pittsburgh season, with the team’s abysmal record indicated at the right side: 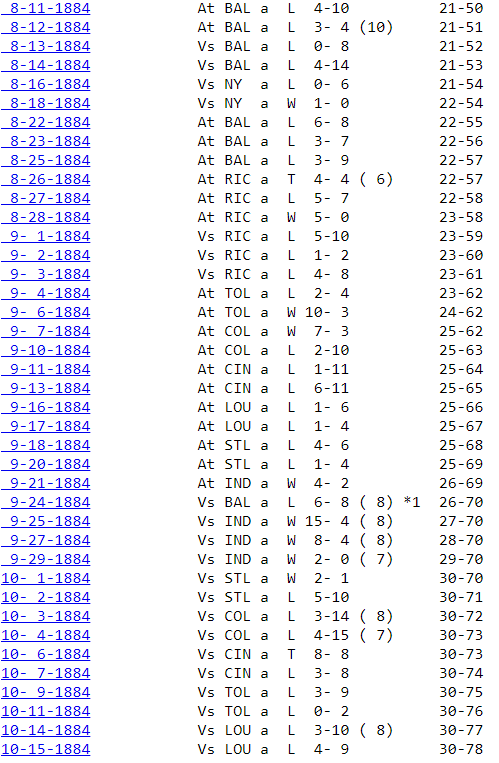 Take note of that final record, 30-78. The Orioles are currently credited with a 63-43 final record. Okay, here’s a look at the standings at the end of the season from 1884: 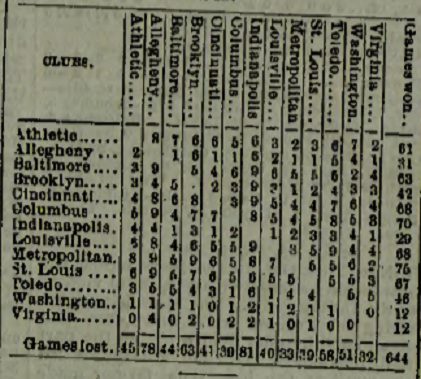 Check this out. You can see that the boxscore says that Pittsburgh beat Baltimore for the first time all year, and then the season recap tells you that Baltimore won the final four games. Here is the season standings by opponent from the official Spalding Guide for the 1884 season (1885 edition):

In that shaky circle I drew is the number one, as in one win by the Alleghenys over Baltimore. That wouldn’t be there if the August 15th game didn’t happen.

You have a boxscore that proves the game was played. Final league standings that prove it counted in the standings. Then the official Spalding guide tells you where the missing game came from between the final records as they look right now, and how they stood in 1884-85.

Here is one of the more amazing things from this game disappearing from the stats. Charlie Hautz debuted at first base in this game. He had an 0-for-4 game with a run scored (at least one source has him collecting a hit, but more/most have no hits). He actually played nine games with Pittsburgh, yet his online stats say seven games and a .208 average. That 0-for-4 game in his debut was the only 0-for-4 game he had, and without it you can’t come up with a .208 average in any seven-game combo from his other eight games. So this game had to be included in that average you see today (he really hit .219), but for some reason that one run didn’t make it into the record books too.

After discovering this missing game and noticing that it was in the standings/records well after the game was over, I talked to baseball historian John Thorn and we were unable to come up with a reason for the game missing. I was able to find a protest made by the New York Metropolitans over Hautz (and Tom Forster) playing before his ten-day release was up in the August 18th game. That was something that happened in the early days, where a team would release a player with ten days pay and he was still attached to that team, which would allow them to bring the player back if something like multiple injuries caused a need for that player. That happened at least a few times in Pirates team history, where a released player just rejoined the club within ten days. The difference here with Hautz is that his team folded, so there was no team to return to if needed. The big problem with the protest from New York is that they had no problem with him playing two days earlier in a loss, but they tried to protest the win.

Certainly a protest about Hautz playing against Baltimore three days earlier could be a possibility, but nothing came of the New York protest and those games are still there in the standings. There’s also nothing I could find about a Baltimore protest. That all ignores the fact that the season ended two months later and the final records still had the game, then the Spalding Guide for 1885 also still had the game. It also ignores his (Hautz) career stats not working without that game. Also, if there was a protest and it went through, Baltimore would have won the game. It wouldn’t have been eliminated. Baltimore actually played the August 22nd game versus Pittsburgh under protest due to two other new players in uniform (for the ten-day rule reason), but since they won the protest was dropped. If the papers announced a protest that didn’t happen, then you would assume that they would announce a protest that actually happened.

That’s a lot of words (and a lot more research) to say that this game should be included in the standings. In the grand scheme of things, a game that moves a 30-78 season to a 31-78 season from 138 years ago, doesn’t really mean much, but why not add that win back in the all-time win column. I think the fans of the original Baltimore Orioles team from 1882-1899 will be fine with the extra loss.

As a side note, there’s another missing game in team history, but that’s best saved for a book.