Today’s Card of the Day comes from the 1937 Goudey set referred to as the Wide Pen set. Today’s featured player is pitcher Cy Blanton, who played for the Pittsburgh Pirates from 1934 through 1939. There’s no good reason to feature Blanton on January 24th. He was born in July, got released by the Pirates in May, and he was acquired by the club in August. I chose Blanton today because I have completely ignored cards from 1937 during the first 22 months of this Card of the Day series. That’s mostly due to the fact that there aren’t that many choices for Pirates cards in 1937, so he didn’t have much competition for the feature spot. However, he was a pretty good pitcher who hasn’t had his own Card of the Day article yet.

Blanton has been featured here twice before, both times on cards that have four players. His first appearance was on the 1935 Goudey 4-in-1 set back in July. His second appearance came not long ago in late October when I featured a 1938 card here for the first time.  That was another 4-in-1 card, and he was a bit overshadowed in that article by the fact that Paul Waner and Arky Vaughan were both on the same card. So Blanton deserves an article of his own and I won’t make him wait until his birthday to get one. 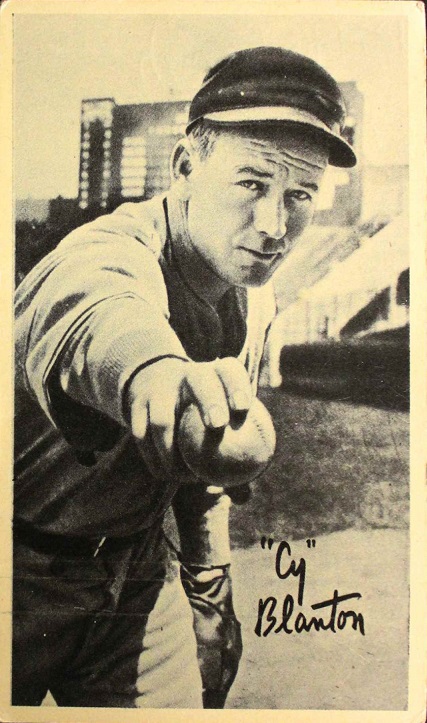 You might be wondering how this set got the name Wide Pen when there is literally no markings that tell you who manufactured the card. At this same time, there was a similar looking set of cards called Fine Pen. You’re probably seeing where I’m going here now, but if not, the names are just based on the writing of the facsimile signature. Wide Pen = wider writing. Here’s a recent example of the Fine Pen set, which was featured here on Thanksgiving Day. As a side note, I got the colorized version of that Fine Pen card for Christmas this year, which is quite an unplanned coincidence that I’m realizing as I type this sentence, because the Blanton card you see above was part of a group of three Blanton cards that I got for Christmas in 2020.

Blanton had an outstanding rookie season for the 1935 Pirates, going 18-13 in 254.1 innings, while leading the league with a 2.58 ERA, four shutouts and 1.08 WHIP. He allowed just three homers all season. When these cards started coming out, he was coming off of a 1936 season in which he went 13-15, 3.51 in 235.2 innings. During the 1937 season, he went 14-12, 3.30 in 242.2 innings, and he was named to his first All-Star team. Blanton was a big strikeout guy at the time, and during the 1935-37 seasons, he finished among the top five in strikeouts all three years. So he was a pretty good card to get for Pirates fans at the time. I wouldn’t call him the ace of the staff in that time-frame, no one really fit that bill for more than one year at a time, but they had a nice group of quality pitchers during the mid/late 1930s.

If you’re interested in adding a Cy Blanton card to your growing Pirates collection, then head over to Ebay and search “1937 Goudey Blanton”, where you will find four options (at the time of this writing).  The lowest priced one is $23.75, while the highest priced one is $58.99. The other two cards are comfortably in the middle of those two options.