Today’s Card of the Day comes from my favorite Donruss set from the 1980s and possibly my favorite overall product from them. The subject is Benny Distefano, who is somewhat famous in the baseball history circles because he is the last left-handed catcher in Major League history. That last part is key because I’m a lefty and I caught in Little League after his last big league game at catcher. I also played third base and shortstop, but you don’t see my name mentioned as a trivia answer. I never played second base for some reason in all of my years of little league, the only position I missed. Enough about me, let’s look at the card of the man who is the answer to the trivia question. Here’s card #514 from the 1987 Donruss set. 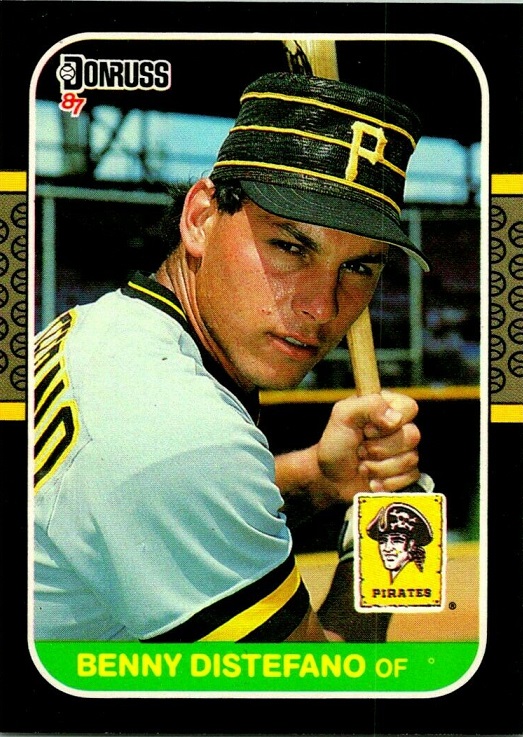 Look at that front design! (insert heart eyes emoji here).  I love the look of the black borders, with the yellow stripe on either side of the little baseball pattern in the middle. That design works so well with the Pittsburgh Pirates uniforms, but it looks good with every card. The inclusion of that Pirates logo on the front adds to the look here. I’m not a fan of the bright green for the name/position bar, but I can overlook it, especially because not every team has that color combo in that spot. The photo quality of this set is strong as well, as you can see here in the Distefano card. That wasn’t always the case before Score upped the photo game in 1988, then Upper Deck took it to another level in 1989.

Aside from the set design, the uniform from this era is great as well, except for one detail. I am a huge fan of the pillbox caps, BUT I do not like that mesh version of the cap, which you can see very well in this photo. Here’s a fun fact about Distefano that I didn’t realize until today. He played four seasons with the Pirates (I knew that part) and he wore four different numbers during that time (10, 14, 30 and 31). 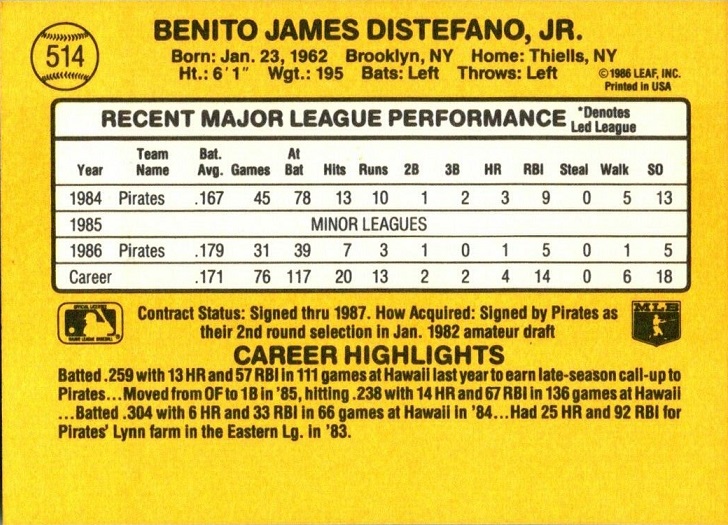 I’ll quickly repeat what I’ve said numerous times about these backs. Donruss got very lazy during the mid-1980s and used the same design over and over and over, with the only difference being the color. However, they loved blue and yellow for the back colors, so they used them more than once, just not the same color in back-to-back years. Also, I always have to pat them on the back for the contract status section. I just used it for a player bio 2-3 days ago when I couldn’t find the info anywhere else. As you can see by the stats, Distefano wasn’t setting the world on fire in the majors, though he made it there quickly after getting drafted in 1982. He would do much better with the 1988-89 Pirates, but he spent the entire 1987 season in the minors. He first caught for the Pirates on May 14, 1989, becoming the first lefty catcher in nine years. He last caught in the majors on August 18, 1989. However, he caught in the minors during the 1992-93 seasons.

The price section here is interesting because of how popular this card is for autographs. Ebay has 50 auctions for this card, so you know the drill by now. You should have no trouble finding the card for $2 delivered. The autograph versions don’t go that low, but they aren’t far off either. There are two for around $4 delivered and two for around $5 delivered, and one done in pen for $2.50 delivered, with a best offer option. Then there are five others that cost between $6-$20 each. You could have fun going after a signed Distefano collection because he is/was apparently very generous with his time for fans. My initial search on Ebay was just to see which set I wanted to feature and there were a ton of signed cards from all different sets.