Today’s Card of the Day features Jimmy Anderson, who pitched for the Pittsburgh Pirates from 1999 through 2002, then played briefly for three different teams during the 2003-04 seasons. He was born on this date 1976. He was drafted out of high school in 1994 in the ninth round. By the end of the 1996 season, he was named by Baseball America as one of the top 100 prospects in baseball. That led to him being featured on a 1997 Topps Prospects card with fellow pitching prospects Ron Blazier of the Philadelphia Phillies and Jay Witasick of the Oakland A’s. Today we are going to look at these prospects going into 1997, as well as their career results, so we can critique the selections made by Topps 25 years later. 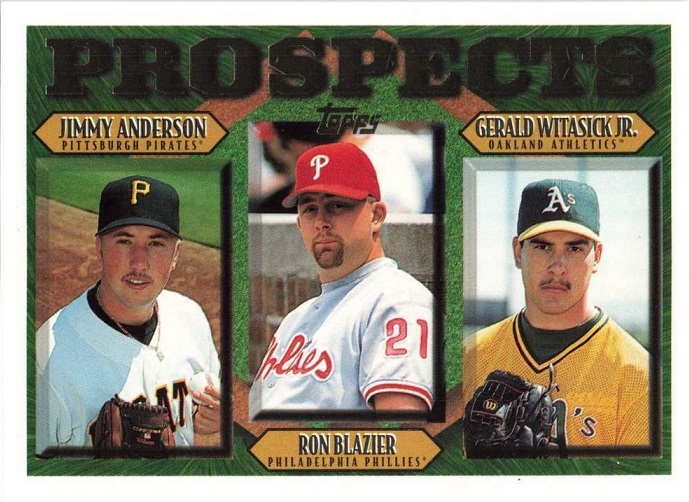 Anderson was still two years away from making his big league debut, and more like three full years away when that photo was likely taken. Topps was taking a bit of a leap with his inclusion, at least compared to the other two players.  I’m really not sure why Blazier made it on to a prospect card. He was short of the games/innings to eliminate him from the Rookie of the Year voting in 1997, but he joined the Phillies at the end of May in 1996, and remained with the club through early August, then rejoined them in September, so he had too much service time to be considered a rookie at that point. Witasick was 23 years old in 1996, with 12 games of big league experience that year, so he still qualified as a prospect. Anderson in comparison had a half season in Double-A up to that point, and that’s it, so he was about two big steps behind each of the other two players. I’m going to look into their career more after seeing the back… 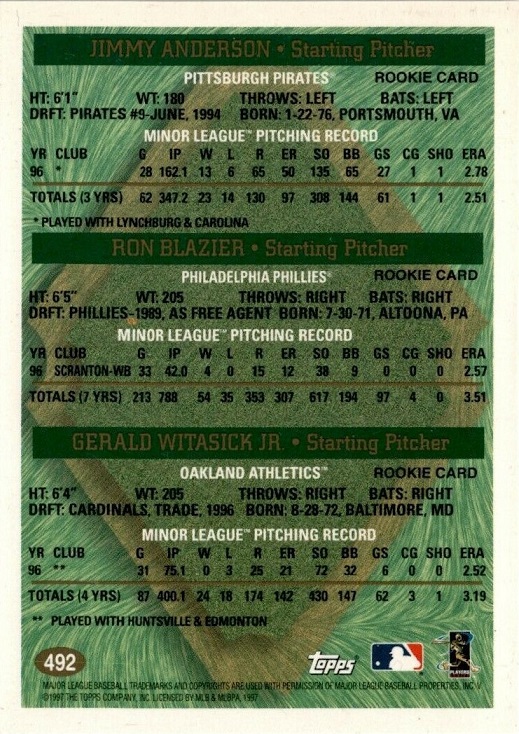 You can see why Anderson was a top prospect at the time.  He was young and had strong results in 1996, plus strong career results. Most Pirates fans known how he turned out. His debut in the majors was actually fairly solid in 1999, with a 3.99 ERA in four starts and nine relief appearances. However, his next three full seasons with the Pirates saw him go 22-41, with an ERA over 5.00 each season. He played a total of six years in the majors. This seemed like a good choice at the time, but things didn’t work out as planned. Can’t really knock Topps for including him here.

Blazier was signed out of high school after not being drafted. He moved slowly through the minors, but once he reached full-season ball, he put up solid results at each level. He did very well in a closer role at Triple-A in 1996, but he struggled in the majors, putting up a 5.87 ERA in 38.1 innings over 27 appearances. He was a 24-year-old reliever with too much big league time to be a rookie, so it was an odd choice for a prospect card. I’ll give them the fact that he had a lot of success in the minors up to that point. After the card came out, he made 36 appearances for the 1997 Phillies and he had a 5.03 ERA in 53.2 innings. He made the Opening Day roster, then got sent to Triple-A in late April. He was back in May, but in July the Phillies made the curious move to send him to High-A so he could work on a split-finger fastball. He came back in August, but he had elbow surgery during the following Spring Training, which cost him all of 1998.

Blazier didn’t recover well, and the Phillies released him in March of 1999. He signed with the Baltimore Orioles, where he had a rough time in Double-A, which ended up being his final season. You have to wonder how much learning a tough pitch had to do with his injury, and then it appears that he couldn’t regain his form afterwards. The rookie status made this an odd choice, but it appears that the elbow injury basically ended his career right in his prime, so we don’t know exactly how things could have turned out here. Sadly, Blazier passed away unexpectedly last month at 50 years old.

Witasick was a second round pick in 1993, who did well in a half season of Double-A in 1996, then saw both Triple-A and big league time with the A’s during the second half of the year. The results in the majors were poor, with a 6.23 ERA in 12 appearances, but he was a bit rushed to the majors with very limited Triple-A time. He pitched five seasons in the majors before he hit his stride, posting a 3.30 ERA in 79 innings of relief work in 2001. He also put up strong results in 2002 and 2004-05. Witasick ended up playing 12 seasons in the majors, finishing with a 4.64 ERA in 731.1 innings. He wasn’t ever thought of as a star, but you can’t hate on the selection of someone who played 12 seasons in the majors. He was a second round pick, with big league experience, so the choice of using him at that time also made some sense.

Anderson’s results are basically low-end of what you want to see from a player on a prospect card. Blazier got sidetracked by an injury, while Witasick is about middle ground for a prospect choice.

This card is cheap as you would expect, and that’s not just because of their results. It was an era of high print runs for cards, so they (base cards from regular issue sets) are almost all fairly cheap. You can get it for about $2-$3 delivered. There is one really interesting auction, though I’m not sure on the price being good. For $45+shipping, you can own one signed by all three players. My guess is that not a lot of those exist.