One of my favorite ideas ever from Topps is the Archives sets, where they take an old Topps front design and reissue it with a current player, while also throwing in some retired stars in throwback photos. Back in 1991, Topps had a slightly different idea for their Archives line/name. They reissued the cards of the 1953 Topps set. One of those players in that 1991 set is Danny O’Connell, a second baseman for the Pittsburgh Pirates, who was part of the most lopsided trades in team history, at least as far as the two sides to the deal. He was sent to the Milwaukee Braves on December 26, 1953 for six players and lots of cash, at least in 1953 $$$ terms. You don’t see many deals where one player is dealt even up for six players, plus there needed to be cash involved to round out the deal. You would at least assume that the Pirates were giving up the cash for all of those players, but it went the other way around. As it turned out, O’Connell was just a solid player for the next eight years, averaging 1.6 WAR, while the best part of the deal for the Pirates was the cash.

O’Connell doesn’t have a lot of options for Pirates cards, so he’s not going to be a regular in this series. He showed up in the 1951 Bowman and 1953 Topps sets. He was with the Pirates in 1950 and 1953, while spending the 1951-52 seasons serving in the military. Considering that we have looked at those other two sets here before, I decided to use the 1991 Topps Archives set today. O’Connell is card #107, which is his same card number from the 1953 set. 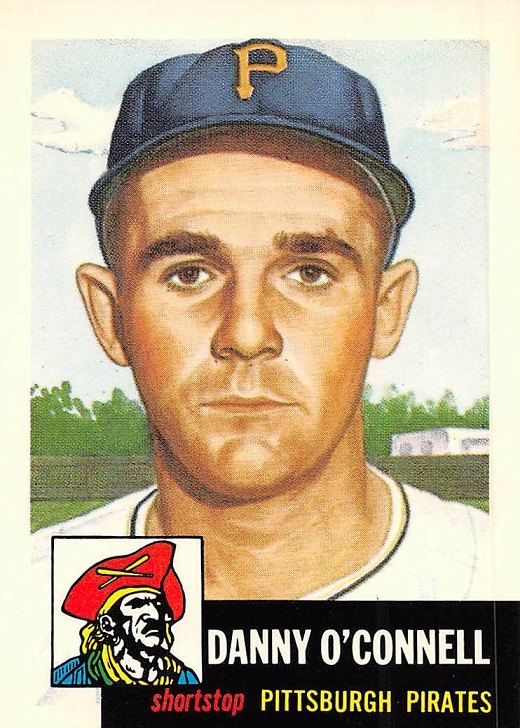 If you don’t know what a 1953 Topps card looks like for comparison, well you’re basically looking at it. They used artwork of players based off of actual photos, with the same black box (not black for all teams) and different color writing for the name, position and team name. Then there’s that great old school Pirates team logo. They really need to bring back something similar in place of the boring current logo. The easier to spot differences between the 1953 and 1991 cards are on the back. 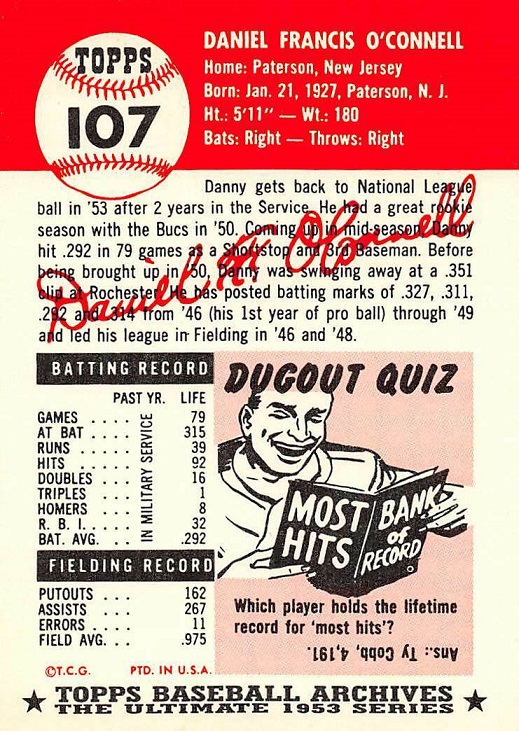 While this is the exact same look at the 1953 Topps card as far as design and what is written on the card, the colors are a bit off, especially the background color, which is white here and gray on the original card. The bottom part where it says “Topps Baseball Archives: The Ultimate 1953 Series” is the biggest different between the cards.

Topps could have updated the trivia answer here, which is a fun fact that most people still don’t know. When Pete Rose broke Ty Cobb’s hit record, in what is a famous video I’ve seen well over 100 times I’m sure, he didn’t actually break Cobb’s record. He just extended his own record. By the time this card came out in 1991, Cobb’s hit total was already updated to 4,189, after research realized that a game with two of his hits was counted twice in his total. Rose actually broke the record somewhat quietly three days earlier at Wrigley Field with a hit off of Reggie Patterson of the Chicago Cubs. The hit at home off of Eric Show will always be celebrated, but in reality it wasn’t any different in historical significance than the next hit he collected.

As for price on this O’Connell card, the 1991 Archives set remains somewhat popular to this day, so it’s easy to find plenty of examples on Ebay. Unlike the 1953 card, there isn’t a range of condition availability, because by 1991, everyone knew to keep cards in good shape and they would be worth more. That keeps the price of the set down and you have numerous options for O’Connell for under $2 delivered, with no specific auction that stands out. These cards are popular for autographs, but he sadly passed away at age 40 in 1969. You can find his 1953 Topps/1951 Bowman cards autographed, but those will cost you some serious coin.