Today’s Card of the Day subject is Brian Giles, who is celebrating his 51st birthday somewhere today, unaware that he’s our latest Card of the Day subject. This is his second appearance in this series, following his debut back in July when we looked at a throwback design from Fleer. Today’s card isn’t exactly Brian Giles, but he is on the card. The 2002 Upper Deck Vintage set had a throwback design as well, which looks a lot like the Topps product from 1971. Card #252 in the set is the Pittsburgh Pirates checklist. The front of the card features Brian Giles, though he also has his own card in the set. I liked the checklist better, so that’s what we are going with here. 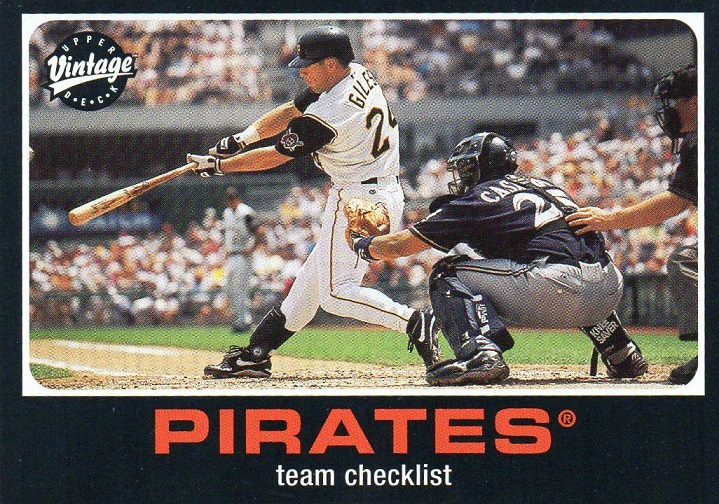 Most of the cards in the set, including the regular Brian Giles card, have the vertical photo layout that we are all used to seeing on cards. That’s one of the reasons I went with this card instead. You need the horizontal layout to get the full swing here, with the catcher in full view and a partial look at the umpire. As an added bonus, you even get the first base coach (Tommy Sandt). In case you’re unfamiliar with the look of the 1971 Topps set, here’s the last article we did for that set, featuring Dave Cash.

While I tried to narrow this down to a specific game, the closest I could get was that it either happened on May 20th or June 28th. I used Raul Casanova’s game-by-game 2001 season to see that he caught two day games at PNC Park in 2001 and both had huge crowds, so I couldn’t get any closer than that date. I even used my Newspaper.com subscription to look at photos from the game and both games had the same uniforms, but I’m going to make a guess here. This was definitely taken on June 28th. How can I be so confident after all of those dead ends? The Pirates swept the Brewers in a four-game series on June 25-28, so my confidence is more of a wish…also, the umpire choices are a 29-year-old Mark Wegner (June 28th game), or a 52-year-old Randy Marsh (May 20th) and that does not look like Marsh, who was a bit stocky, with somewhat hairy arms. 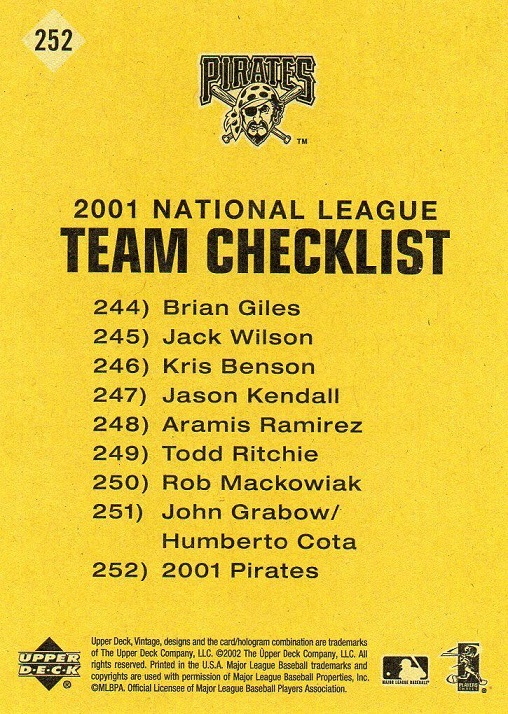 The back is exactly what you would expect from a checklist, though I’m not sure you would have expected such a bright color when you turned the card over. That’s especially true if you know what the back of a 1971 Topps looks like and you thought the front similarity might carry over to the back. As you can see, it was not a big team set, but we are talking about the 2001 Pirates here, so it wasn’t an exciting overall group. Card #251 you see there is a rookie prospect card. Nothing against John Grabow and Humberto Cota, both played in the majors for 7+ seasons, which is a significant accomplishment, but it wasn’t an exciting pair of prospects from the start. They ended up being a middle reliever and a backup catcher. That’s not exactly the results you’re looking for from your rookie prospects, but as we have seen here in the past, there have been much worse results from players on prospects cards. The Pirates logo at the top is an excellent addition.

There aren’t many options here for this card on Ebay. One person has a good price/low shipping ($2.24 total), one has a good price/high shipping ($4.49 total), and one has a high price/high shipping ($9.04 total). It doesn’t take Goldilocks to figure out which one is the best option. However, I don’t believe that the one for $2.24 is the best option. How could that be true, you say shockingly! Calm down, no need for exclamation points. A seller has the whole team set for $6.25 delivered, but that has a best offer option, so you can/should get it cheaper. Of course only one of you can get that team set, so don’t dilly dally.