Today’s Pittsburgh Pirates Card of the Day is the first in 17 months for the 1984 Topps set, and the first for Lee Lacy in nine months. That last Lacy card was a 1983 Donruss card, and it marked the first time that he appeared in this series. I posted that article for his 73rd birthday. Today’s article marks the anniversary of him signing a six-year deal with the Pirates in 1979. Lacy batted .247/.327/.412 in 84 games for the 1979 World Series champs, seeing most of his playing time in left field. When he was signed by the Pirates, there was plenty of talk of him taking a backup infield job at multiple positions. He ended up starting just four games in the infield during his six years in Pittsburgh, which is relevant to something shown on the front of today’s card. Let’s get into card #462 from the 1984 Topps set featuring Lee Lacy. 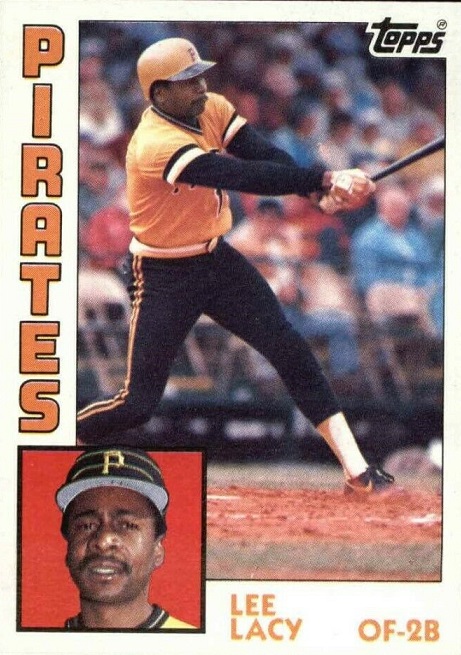 Before I get into the look of the card, take a look at the bottom right corner with the positions next to his name. I’m sure I don’t have to explain to anyone that it means that he played outfield and second base. That was definitely correct before he joined the Pirates, but that second base part of his positions should have been removed by that time. During the 1979-83 seasons with the Pirates, he played a total of 29 innings at second base. In fact, all 29 of those innings came in 1979, so the four seasons prior to the release of this card, he played zero innings at second base. Third base would have made just a little more sense, but only because he played there during the 1980-83 seasons. However, we are talking about one start and 17 innings total during that stretch, so it’s a stretch to call him a third baseman too.

The 1984 Topps set is one of those ones that sits comfortably in the middle. I don’t hate it and don’t like it. It’s nowhere near as good as the 1981 or 1987 sets, which rule the decade, but for me it’s also behind the 1982 and 1985 for sure. After that point, I’d have to put in thought to figure out where it rates. I like the addition of a second photo, and of course with the Pirates during this time, you’re going to get photos of great uniforms. All of the Pirates cards had the same color combo, including the red background for the photo box in the bottom left. All except Chuck Tanner that is, and he has a Pirates logo, which I like a lot better than the other cards. 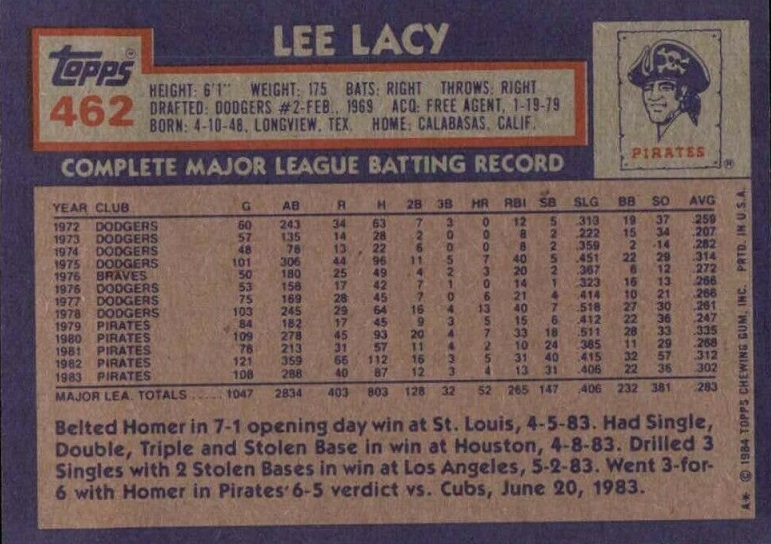 Lacy is a decent example of why I think Topps hated the eyes of collectors everywhere. This is a scan enlarged for detail and it’s still a bit difficult to read the stats. Picture someone with a few more seasons in at the big league level and it just gets worse. I like that the team logo was included on the back, even if the colors are off a bit. This back reminds me that I need to throw “verdict” in when I’m writing an article and switching between win, victory, triumph, etc.

Are you interested in this card? It’s a nice pose of Lacy and it has almost all of his stats with the Pirates included (I’d go for the 1985 if you’re looking for all of the stats, and I like the look better). You can get the card for around $2 delivered from multiple sellers. There are also three autographed copies available, two in pen that are going for $7-$8 each, and one in blue marker that looks much better (my opinion) for $21. Lacy has a nice autograph that you can actually tell it’s his name, unlike 95% of current players who scribble on cards and you would never know it’s them if it wasn’t on their own card.