I haven’t used Wandy Rodriguez in our Card of the Day series yet, so what better day than his 43rd birthday to featured the left-handed starting pitcher for the 2012-14 Pittsburgh Pirates. I chose the 2014 Topps card because it’s an interesting dugout shot that features three other players. When I looked into the set, I realized that there are a ton of options for this card, so I did something different here for the first time (I think). The front scan and the back scan are not the same cards. That’s because I wanted to featured a specific front and the back scan is not available. So the back here is from the regular base card from the 2014 set, while the front is a Gold Mini, which I’ll explain better after you see the scan. Let’s get right into it. 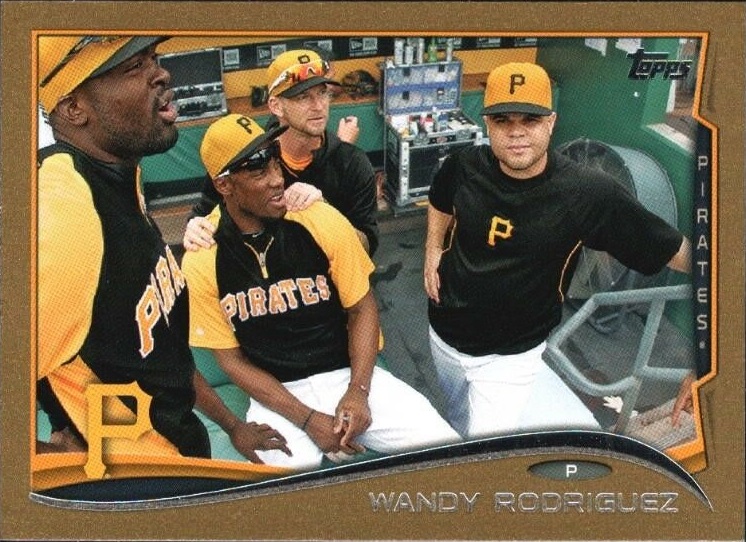 One of the things that truly doesn’t come through in the article is the size of the card, and without having the specific card in hand, it’s impossible to tell that the card in the scan you’re looking at above is smaller than the average baseball card from 2014. That’s where the Mini part of the card comes from, while the Gold part is the coloring of the borders. The normal border color is white. Down in the price section, there will be a lot more to cover as far as variations.

I liked this card because it’s not your typical baseball pose. Without his name at the bottom, you might not think that this is the photo they chose for Wandy Rodriguez. Looks more like a team photo, one that Topps would use for the team checklist in some years. Starling Marte and AJ Burnett are easily recognizable, but after looking through the 2013 team and talking to someone else, it looks like the player closest to the camera (far left) is Felix Pie. That would mean that this photo was taken in late 2013, when Rodriguez was injured and out for the year, which is mentioned on the back… 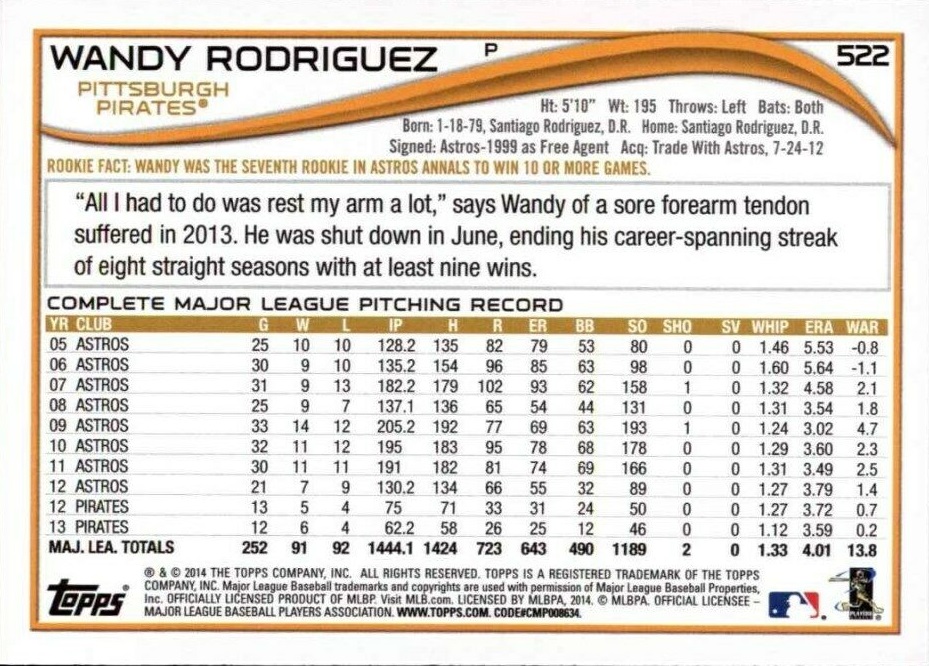 If this was the back scan to match the Gold Mini up top, you would find “07/63” at the top of this card after his name, letting you know that it was card #7 of 63 made. Almost all of the variation cards are short-printed, as you will see below. I like that Topps added WAR here. They don’t say where they got the WAR number, but I like Baseball-Reference the best and they had Rodriguez with 14.5 career WAR at this point in his career. Notice the quote mentions that Rodriguez last pitched in June and it broke his streak of consecutive seasons with nine wins. I don’t think I’ve ever heard “nine wins” used as a cutoff for a streak before.

Here’s where things get fun. There are 47 options for 2014 Topps Wandy Rodriguez” on Ebay right now. There are a handful for under $2 delivered. The highest priced one is just over $20. There’s also an error that is missing his name and that’s going for $13 delivered, though it has a best offer. Here’s a list of what Ebay has available right now for this card, along with an average price, starting with the most common first and going down in scarcity:

So you can go to Ebay right now and buy 12 different versions of this card. You would still be missing five cards according to my count, including the 1-of-1 platinum card, and the printing plate, which has four copies.