Today’s Pittsburgh Pirates Card of the Day article is a “two birds with one stone” feature. I decided to look for a set that hasn’t been used here yet in 22 months of articles, then find a player in that set who hasn’t been used yet. I was a bit surprised that I haven’t used the 1989 Donruss set yet. There are some great names for the Pirates in that set/year. I was also a bit surprised to realize that Mike Lavalliere hasn’t been seen in these parts yet. So I threw a stone and came up with card #244 from the 1989 Donruss set, which features Mike Lavalliere. 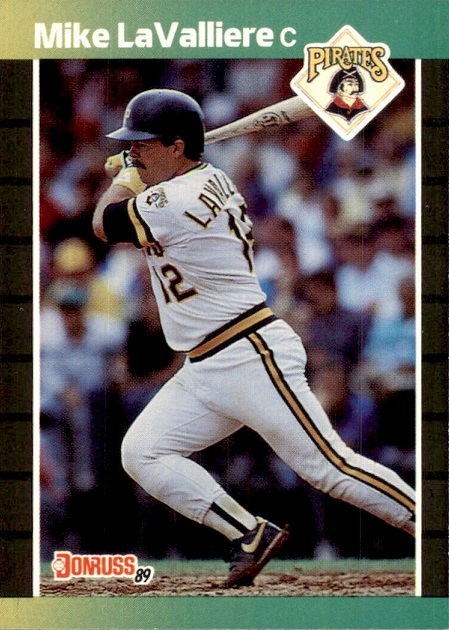 I don’t have strong feelings for the 1989 Donruss set look. If I was rating the Donruss sets from the 1980s, it would be somewhere in the higher middle. I’ve mentioned that the 1987 Donruss set is my favorite from that decade and I’m not sure there’s another Donruss set I like more from any year. The first four Donruss sets don’t do much for me with looks (I like the 1981 because it was the first and 1984 because they are rare compared to other years), so this set might actually rate fairly high, even if I don’t particularly like/hate it. They included the Pirates logo from that era, so that always adds points. I’ll note that not all of the cards in the set, or even for the Pirates players, looks like this one. That green area can be other colors that fade into each other. Many have a purple color, including the popular Ken Griffey Jr and Randy Johnson cards, while others have a red that fades into a yellow, but that’s not all of the options. 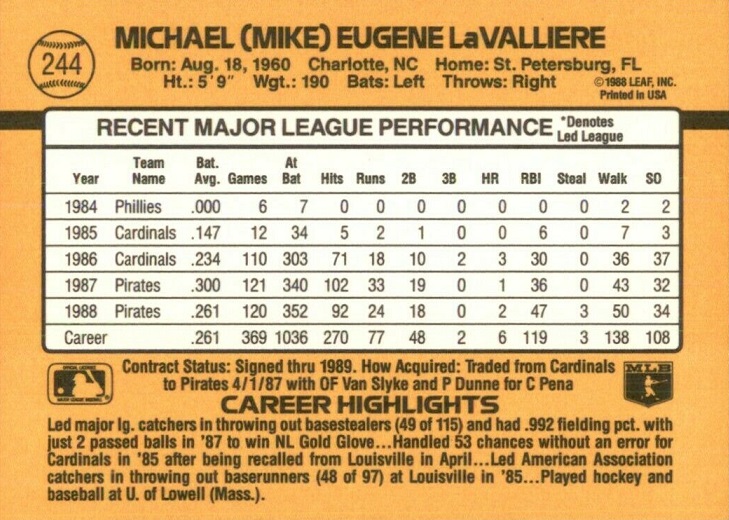 Good old predictable Donruss, recycling backs so we can concentrate on what they write instead of talking about the design. Go look at the 1985 and 1987 Donruss backs, you’re basically seeing the same thing here, just different numbers on the card. I’ve probably read it before, but I didn’t know (or forgot) that Lavalliere played college hockey. All of his other career highlights are about defense. Because it has helped me with writing some bios, I have to always mention how great that little Contract Status section is on the Donruss cards from this era.

One thing to notice here is a small error that was corrected. Find in the stats area where it says “*Denotes Led League”. There are some that say “*Denotes Led League*” with an added asterisk at the end. Obviously not an exciting error, but anything that has an error and corrected version usually has some extra value, unless they are printed in similar quantities. A set like the 1989 Donruss set was massively overproduced, so it’s possible that tons of both versions exist. Lavalliere is not the only player who has this error on his card.

If you’re interested in this card, there’s a website called Ebay, where you can buy individual cards such as this one, and pay about $2 for something that has a value in the $0.10 to $0.25 range. If you really wanted the card though, then $2 is a great price to pay for the convenience of someone listing/packing/mailing/delivering the card to your house. There are three of these cards that are autographed, which list between $9 and $14. There are also cards from a set called Donruss Baseball’s Best with a different pose of Lavalliere. I actually wish I used that one here now that I see it because I like it better, but the rest of the article was already done. The “*denotes*” error mentioned above can be had for $3.99, though if you want that one I’d check auctions because not everyone knows about the error.