Today’s Card of the Day comes from a 1913 set that was designed to look like a deck of playing cards in shape, size and the back design. It’s a set that also looks exactly like another set from the same time on front, but the back of the two cards are different. The only difference between the Tom Barker set and the National Game set (also from 1913), is the ad on the back. Today’s subject is Hall of Fame left fielder Fred Clarke, who also put together a Hall of Fame resume as a manager of the Pittsburgh Pirates from 1900 through 1917. This is the first time here for the Tom Barker set (National Game hasn’t been here yet), so I figured I’d start with an all-time great. 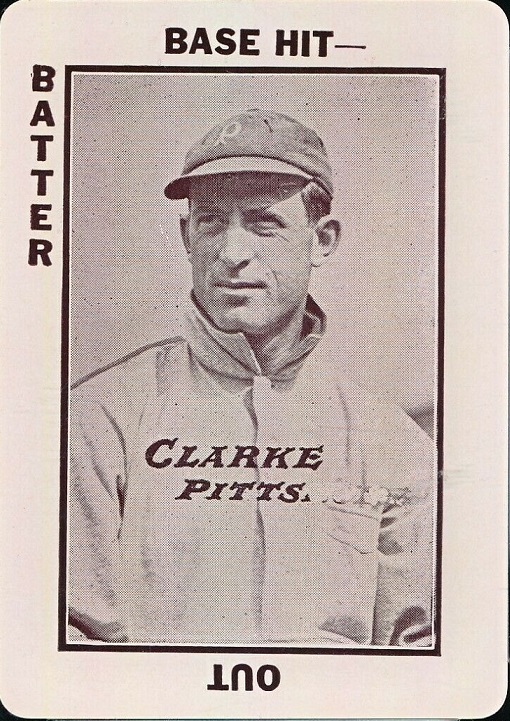 As you can see, the cards have game outcomes, which was part of the game itself. There were 54 cards total in the set, which also game with rules so you knew how to play the games, as well as card so you could score the games. The size of the card is 2 1/2″ x 3 1/2″, though the rounded corners make it a bit shorter/narrower in those parts of the cards. Clarke is identified by only his last name here and the team name, which looks like it has been partially scratched out of the picture. This card you see is a PSA 10 example in perfect condition, so what appears to be damage after the S in Pitts, is actually part of the card itself and intended that way. There was definitely something there before because those jerseys didn’t have anything written there. This was not a new photo at the time because the last time (before 1914) that the Pirates had a plain jersey with a pocket and a dark collar was 1905. 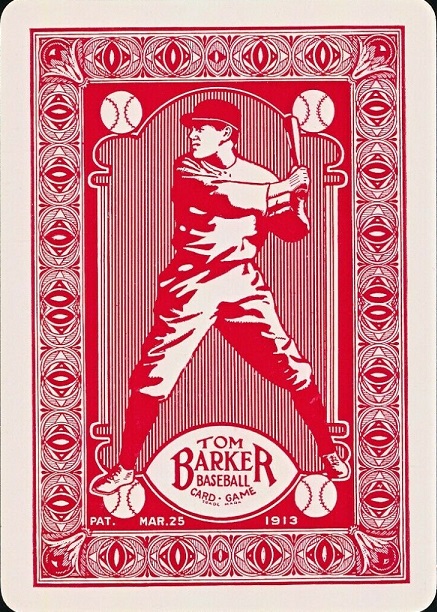 I chose the Tom Barker card game back because it’s much nicer looking than the National Game back, which is mostly just words for the logo, compared to a baseball player here. As you can see, the game was patented on March 25, 1913. You can also see there being more of a deck of cards feel to it on the back. These cards, along with the National Game set, used to be considered a cheaper way to get period cards of great players, but the prices have increased in the recent years.

If you’re interested in the Tom Barker card, there are currently two on Ebay right now and both are well over $1,000 because they are graded PSA 8 and PSA 10 (only two examples have reached that grade). There’s actually a third one as I type this up, but it is an auction style listing and it will be done days before you read this article. Just for reference though, with just under three days left, a PSA 5 doesn’t have any bids with a $144 starting price. That’s a good comparison when looking at those other two prices for the high grade examples.

If the back doesn’t matter that much, then the National Game set offers you the same front and many more options. Part of the cost here comes from the fact that Clarke is a Hall of Famer, so he’s going to draw extra attention from the vintage collectors. A decent mid-grade (ungraded) National Game example is listed for $175, with a best offer option. A better (not cheaper) buy is a PSA 8 for $199, which also has a best offer. There are two others graded MINT (9), one by PSA and one by SGC. The prices are $300 (SGC) and $391. Then just for completeness, there’s a PSA 8 for $472, which is obviously high end on the price scale compared to those other three cards.