Jeff Banister is one of ten players in Pittsburgh Pirates history with a 1.000 batting average for the team. Seven of those players are pitchers, and one is Onix Concepcion, a shortstop for the Kansas City Royals, who briefly played for the Pirates at the end of his career. The other two were catchers, Mike Hopkins in 1902, and Jeff Banister in 1991. Both have interesting stories, with completely different career paths (Here’s Hopkins’ story), but their one chance in the majors came along the same way, with the Pirates down to one healthy catcher and needing a replacement.

Hopkins didn’t get a baseball card, but Banister’s one game in the majors earned him a great looking card from Topps in 1991, which we look at now. 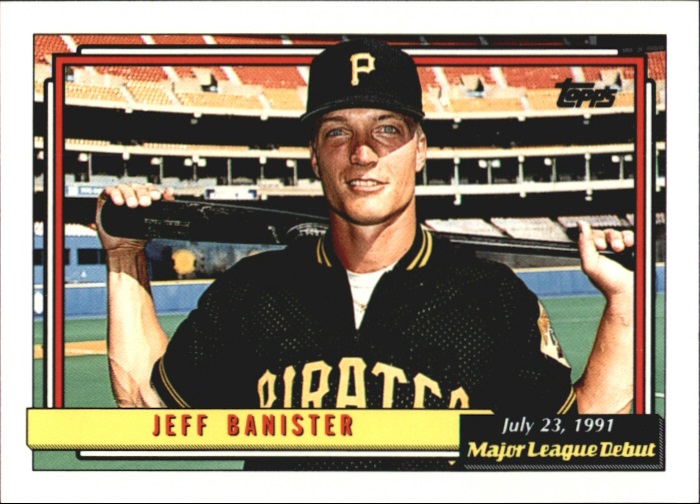 This set had the same exact front design as the regular 1991 Topps set, with one major detail added. In the bottom right you see “July 23, 1991 Major League Debut”. All of the cards in the Debut set have that added with their big league debut date. Otherwise, this is what the regular 1991 Topps cards look like. A very large majority of cards from Topps in 1991 throughout all of their sets (they also had a Traded set) have the vertical setup for the photo that you are used to see with baseball cards. Banister got one of the rare horizontal layouts for his photo, which I personally like better…though whenever I say that, I always wonder if I was used to seeing horizontal layouts and they only included a few vertical, would I prefer those instead?

This card has one detail that I find interesting due to my own preferences. It came up a few weeks ago, where a card used yellow and red for the Pirates card and I said that I prefer when they use team colors, but it still worked. It still works here, going well with the Pirates colors, but that being said, I really disliked when the Pirates added red to their jerseys for a time. So it’s a bit odd that I think the color combo works here, but I like it. 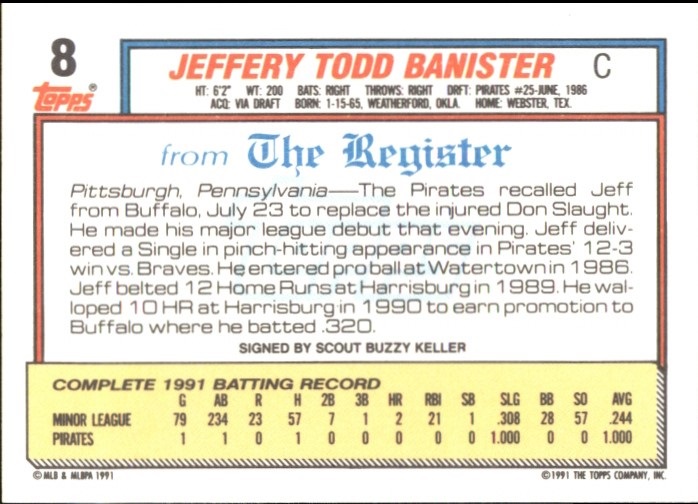 The back tells you everything you need to know about Banister’s big league debut, set up like it was a press release in the local papers. Today’s Pittsburgh Pirates History article details his path to the majors. That inclusion in today’s history article is because today is his 57th birthday, which you can see on the card. A cool addition to this card is the mention of the signing scout, which you almost never find on the back of baseball cards. At the bottom of the card, you see his big league stats, which ends with that 1.000 big league average.

There were actually no active listings for this card and you can’t even get the entire set off of Ebay right now. There have been three auctions that ended for the set and the prices are all of the place. One person sold two in one auction and the person got them for $10 delivered total. There was another for one set that sold for $30 plus shipping. Someone else sold one with the 1991 Topps Traded set and it went for $40 for both. If you want the card, I’d say just wait for a solo auction, but you can probably get the whole set cheap if it comes up. Apparently, these are much tougher to find than I thought they would be, especially considering the time period, when everything was printed in bulk.