Today’s Card of the Day only fits the baseball card collector definition of “card”, and that’s because it’s just easier to include it in with cards rather than breaking down similar collectibles such as stamps, pins, coins, etc into all different categories. This “card” is actually a stamp. It was produced in 1949, and the labeling on the stamp lets you know that it is a Eureka Sportstamp. The person on the front of the stamp is Billy Meyer, manager of the Pittsburgh Pirates at the time, who is one of a select few who have their number retired by the team.

I’ve read that Meyer’s number (#1) being retired was a clerical error discovered years later and no one argued it. He obviously doesn’t have a great case for getting his number retired. He managed for just five seasons and had just one season (1948) with a winning record (he won the Manager of the Year that season). He did some scouting afterwards until a stroke left him unable to work, then he passed away four years after he was replaced as manager. With some research, I was able to find a February 7, 1958 article that mentioned that the Pirates have retired two numbers, Honus Wagner’s #33 and Meyer’s #1. That’s not exactly a long time after he was manager for it to be a clerical error that no one would fact check. That also wasn’t the day it was retired, just the first press mention I could find. He was still the manager up until late September of 1952, so we aren’t talking about any huge gap between the first mention of it in the newspapers and the date when he left the team. Plus he was still with the club for some of that time as a scout. Possibly his stroke while still with the team, and then his passing a short time later, led to the number quietly being retired as a tribute.

Meyer was born on this date in 1893, so today’s the perfect day to feature him in our Card of the Day series for the first time. I had other options, including the 1952 Topps set, and the 1951 and 1952 Bowman sets. I decided to go for something a little different  because all three of those sets have been featured here multiple times. That’s how we get to take our first look at a 1949 Eureka Sportstamp.

Here’s the front of the “card” (the back in blank, like a normal stamp): 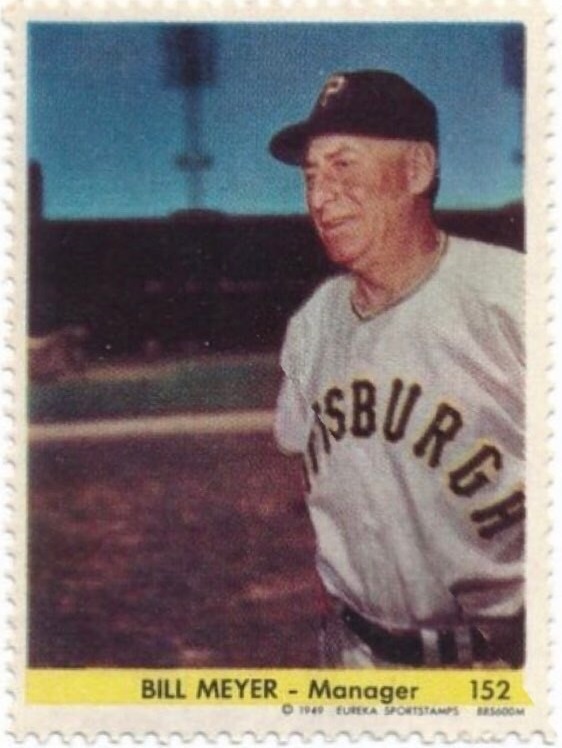 There really isn’t a lot to describe here. It’s a nice photo of Billy Meyer from early in his five-year run with the Pirates. He was already 55 years old when he took over the team in 1948. The Pirates wore the same uniforms during the 1948-49 seasons except for the stirrups, which had stripes the first year. You can’t see that here, so you can’t tell that difference by this photo. Fun fact: The 1948 season was the year that the team switched from blue as their primary color for writing/sleeves,stirrups/caps, to the familiar black & gold that we all know and love. This stamp is #152 in a set (see bottom right corner) that included 200 stamps. The photo here is colorized and the size of the stamp is 1-1/2” by 2”.

If you’re interested in adding this stamp to your collection, head on down to your nearest Ebay and plop down $9.49 or $9.27 for one of the two copies currently for sale. One shows up under “Bill”, then other under “Billy”, so you might have to search twice. There are no sold examples in the last three months. Only five of these have been graded by PSA, but all five are high grade examples. They are tough to find, but not highly collectible, so the price doesn’t reflect the scarcity, except in the high grade Hall of Famers, which can go for good money, especially Jackie Robinson and Stan Musial according to recent sales.