Ron Brand had a nice big league career that was helped out by expansion. His time in Pittsburgh was short, spending a chunk of the 1963 season in the majors, as part of seven seasons he spent with the Pittsburgh Pirates organization to start his pro career. His best big league chances came with the Houston Astros in their fourth season (1965), after they lost 96 games in each of their first three seasons. His next big break came with the Montreal Expos in their first season (1969). Those were the only two seasons in which he saw regular work, but those teams helped him play eight years and 580 game in the majors. Brand turns 82 years old today, so what better day to look at his only Pirates card than today. 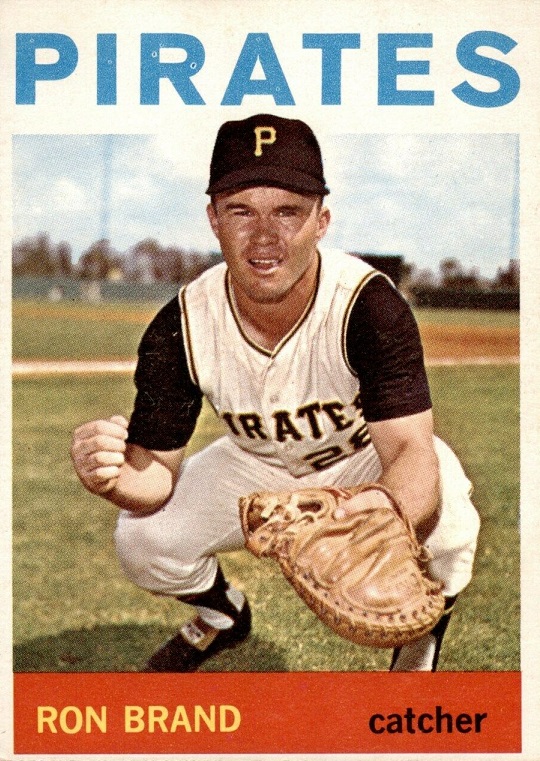 The front has one of your typical staged action photos from Spring Training, though I always seem to like the catching poses better. Those old uniforms sure are great. I mentioned this in the last 1964 Topps article, but it’s worth repeating. I usually prefer the team colors being used on the front of the cards as part of the design, but this color combo works for the Pirates. Topps totally whiffed on the 1965-66 designs for the Pirates when they gave them pink as the primary design color, but this works here. I also like how Brand looks like he’s popping out of the photo because they cut out the background at the top, so he’s bigger than the frame used for the photo section. 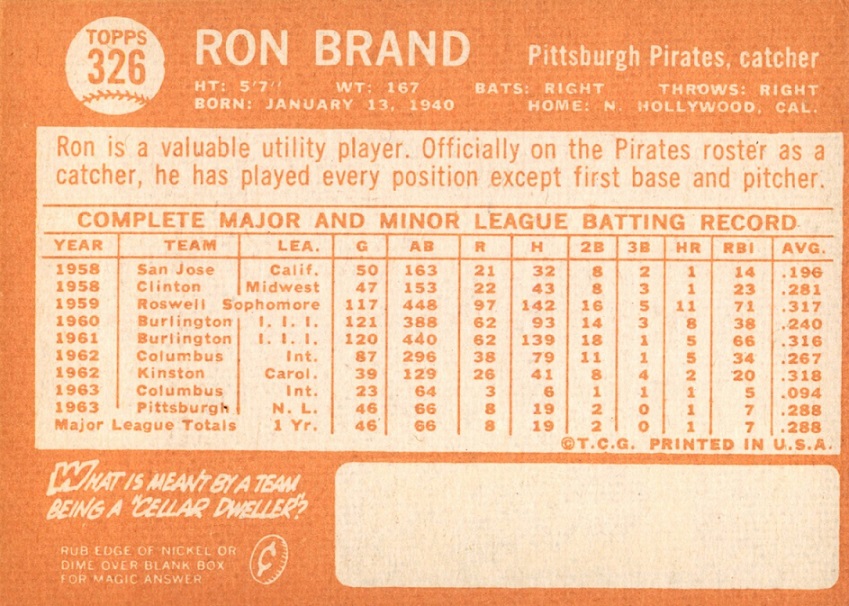 We have looked at the 1964 Topps set as recently as September, but there’s a big difference between that last card and this card. That last one was Smoky Burgess, one of two catchers who saw a platoon behind the plate in 1963 (Jim Pagliaroni was the other), while Brand was their third-string backup. Burgess was an MLB veteran at the time, so not only did the back only show his big league stats, it didn’t have room for what you see at the bottom. Brand was much earlier in his career, so you got his complete minor/big league stats, as well as the trivia question with the hidden answer. The person who owned this particular card was smart enough not to scratch off/reveal the answer, which would have taken away from the value/condition of the card if they desperately needed to know the meaning of “cellar dweller” in baseball. I think it’s a bit odd that they mentioned two specific coins to use to get the “magic answer”, as if pennies and quarters wouldn’t work. I dabble a bit in old coins and I’m thinking about getting three low grade 1964 Topps cards so I can try scratching them off with two-cent, three-cent and 20-cent pieces.

If you’re interested in this card, then you could settle for a nice decent looking copy for about $3 delivered. There are some other options of note on Ebay right now. There’s a PSA 9 that someone wants $200 for right now. There’s a PSA 8 that’s “only” $34, which looks as nice as the PSA 9, so you’re just paying for the holder if you get the more expensive one. There are eight autographed copies, all under $20, starting as low at $7. The final one of interest is a 2013 Topps Buyback, where they literally bought back older cards, added a special stamp to them, then inserted them back into packs.