Today’s Pittsburgh Pirates Card of the Day combines two players mentioned in today’s This Date in Pittsburgh Pirates History article. Today’s the birthday of third baseman Bill Madlock, and it’s the anniversary of Willie Stargell getting elected to the Hall of Fame. Both players have been featured in our Card of the Day series multiple times, both on solo cards and cards also showing other players. However, we haven’t had a card featuring both of them until today’s article. The 2021 Leaf set had a subset of cards called Lumber/The Franchise 4. They featured pieces of game used bats on the same card belonging four players from the 1979 Pirates. Those players are Madlock, Stargell, Dave Parker and Mike Easler. Here’s a look at one of the variations from that set. 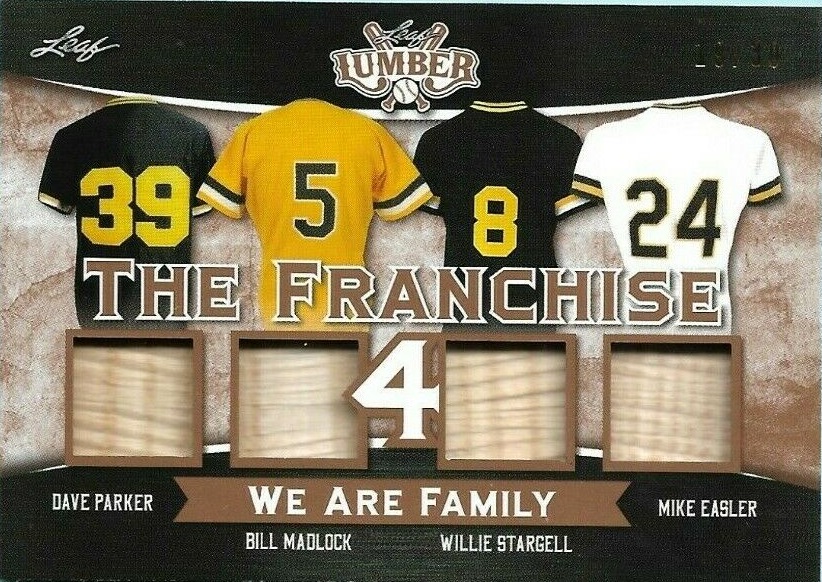 One thing you might notice right away on this great looking card is that you don’t see the word Pirates (or Pittsburgh) and there are no logos or player likenesses. Even without those details, there’s no confusion at to which team is represented on this card.  I’ll talk more about those missing items when we look at the back. For now, you see different looks on the jerseys to represent the four players on the card, each with their familiar number. Fun fact, Easler also wore #15 while with the Pirates. Below each player jersey, mounted on the card, is a sliver of a game used bat. Then you see the names and the famous “We Are Family” slogan from that magical 1979 season. This really is a great looking memorabilia card, even without some major details. 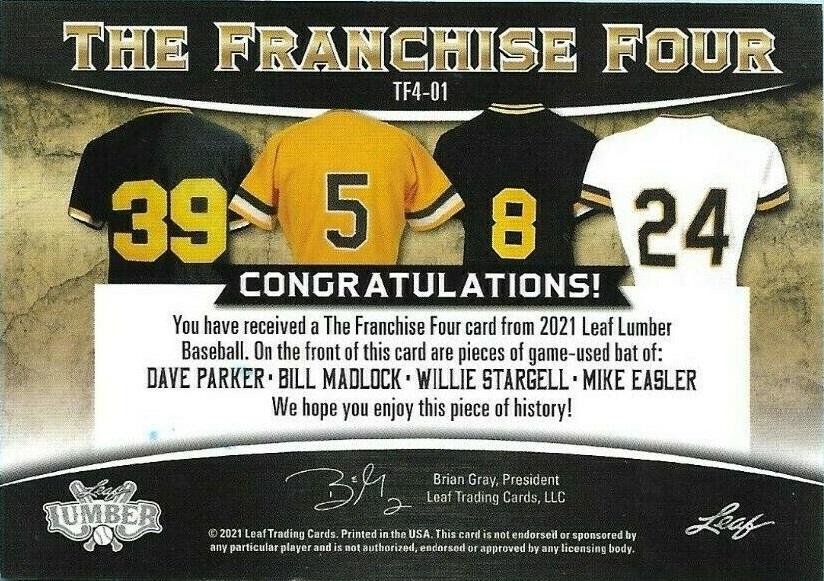 I thought this was an interesting detail from this card. The back says “THE FRANCHISE FOUR” while the front of the same card says “THE FRANCHISE 4”. A bit odd for the title of the card to be written two different ways. The back has the same pictures of the jerseys and lets you know that the stuff on front is authentic. Once again, no Pirates name/logo or player likeness. Get out your magnifying glass for the bottom of the card and notice that it says “This card is not endorsed or sponsored by any particular player and it not authorized, endorsed or approved by any licensing body”. Leaf doesn’t have contracts with MLB or the MLBPA, so they couldn’t use anything that didn’t come with a licensing agreement with the individual players themselves, leading to some odd cards that have pictures of a player and a different player’s jersey on the same card.

There are four different versions of this card on Ebay right now, all with different levels of toughness. This particular one is numbered to 30 copies. It’s hard to see on the front, but in the top right it says “19/30”. There are currently two of the cards numbered to 30 available for sale, and they are going for $50 and $79.  There’s a Platinum version where only seven copies exist and two are on Ebay right now. They are $65 and $79 each. There’s a Navy Blue version numbered to just three copies and the one on Ebay is $90 with a best offer option. Finally, there’s a Silver version and two copies exist. One is on Ebay and they want $110 for it.

Here’s an interesting fact before you buy any of those. Someone recently sold an Emerald version, which has just four copies and they ran a regular auction (no buy it now) and it ended for $20.50, well under any of those asking prices. There are also other colors that were printed in different quantities, just in case you were thinking of collecting one of every colors. You would also need to get Purple, Crimson, Pewter and Gold, which were all numbered to fewer than ten copies.