Some sad news to report on the history side, as Eddie Basinski, second baseman for the 1946 Pittsburgh Pirates, has passed away at 99 years old. He was the last living Pirates player from the 1940s, and he was the second oldest former Pirates player.

Here’s our site bio for Basinski, which was updated on his birthday back in November:

Basinski spent a total of 16 seasons in pro ball and played 2,165 games total, with 203 of those games coming in the majors. At age 99 today, he’s the oldest living former Pirates player and he’s the second oldest MLB player behind George Elder of the 1949 St Louis Browns. Basinski debuted in pro ball at 21 years old in the majors after only having limited semi-pro experience. He played his first two seasons in the majors (1944-45) with the Brooklyn Dodgers, hitting .261 in 147 games. He hit .257 in 39 games for the Dodgers in 1944, but they thought he needed some minor league experience. He saw some time with Montreal of the International League during the second part of the 1944 season, but the entire 1945 season was spent in the majors, where he hit .262 in 108 games. It was an empty average, with low power/walk numbers leading to a .606 OPS. Basinski was playing shortstop for the Dodgers at the time, a spot that was left vacant for three years when Hall of Fame Pee Wee Reese entered the military during WWII. When Reese returned, Basinski ended up spending the entire 1946 season in Triple-A with St Paul of the American Association, where he put up a .653 OPS in 136 games.

Basinski was traded to the Pirates in December of 1946 for pitcher Al Gerheauser.  He was the everyday second baseman for the Pirates for 2 1/2 months, then spent the next week on the bench. On July 10th, the Pirates acquired pitcher Mel Queen from the New York Yankees and agreed to send Basinski to Newark of the International League, which was considered the farm team for the Yankees. After 12 games in Newark, he ended up playing out the season with Portland of the Pacific Coast League. Basinski batted .199 with four homers in 56 games during his time with the Pirates, which ended up being his last year in the majors. Despite playing his final big league game with the Pirates on July 4, 1947 at 24 years old, his pro career was far from over. He played his final pro game in 1959, spending 12 1/2 seasons in the Pacific Coast League. His highest batting average in a season of pro ball was .277 until he managed to hit .301 at age 38 in 1958 for the Seattle Rainiers. He played for Portland every season from 1947 through 1957, including nine full seasons (1948-56). 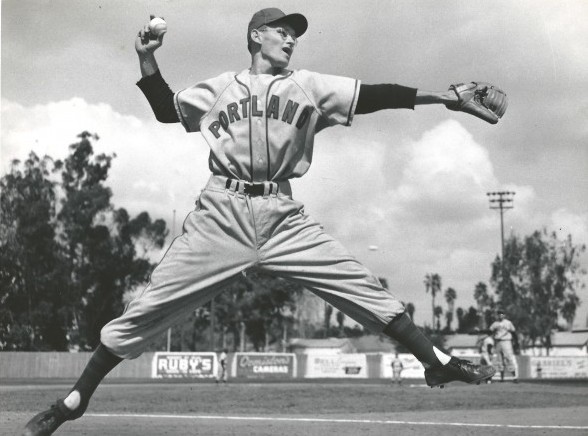