Today’s Pittsburgh Pirates Card of the Day subject was picked by the readers of this site without knowing it. I ran a poll a little while back on Twitter with no information, just asking people to pick one between Warren Morris, Jermaine Allensworth and Lloyd McClendon, three former Pirates born on January 11th. McClendon received 56% of the votes, ahead of Morris at 31% and Allensworth all the way back at 13%. I almost used Allensworth just because I felt bad for the low vote total. I stuck with my original plan though, and looked for a set that we haven’t covered yet. Surprisingly to me, the 2001 Topps set fit that one criteria. So here’s a look at card # T149 from the Topps Traded set featuring the new Pirates manager, Lloyd McClendon. 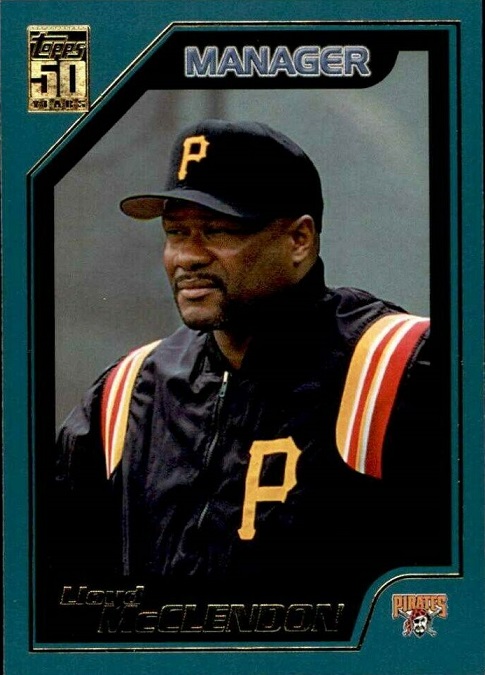 The 2001 Topps set highlighted 50 years in the business of baseball cards for Topps. I like the design idea except for one thing. The border color is fine. The Topps 50th year logo is a solid design. The Pirates logo from that era in the opposite bottom corner is nice, though they could have made it a little bigger. The photo shape not being standard rectangle shape is a neat change. The spot where they lost me is the name section. For some reason, Topps has made a lot of sets over the years when the writing isn’t much different in color as the area behind it, making the name harder to read. I don’t know why someone thought that was a good idea, or why no one ever told them it wasn’t the best choice.

That name color decision pales in comparison to the person who came up with the jacket design there. About 88.7% of that jacket is great, but the other 11.3% consisting of orange and red and white stripes…that should be illegal. McClendon looks like he’s contemplating life choices with those Burger King stripes on his jacket…or he’s thinking about stealing first base? 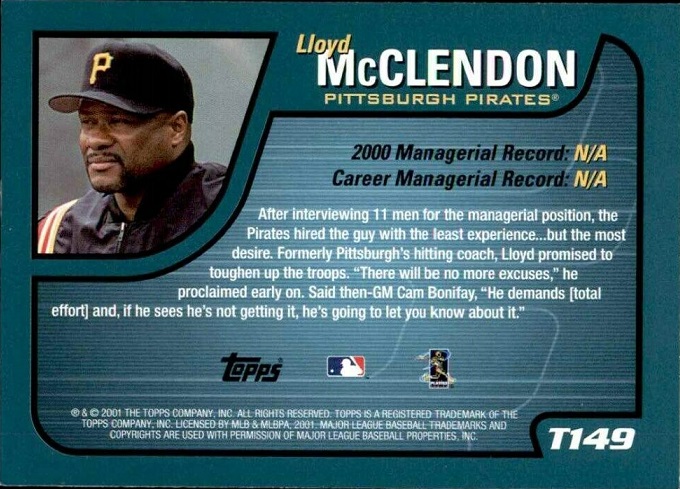 History was not kind to the back of this card. Like every good new manager, they should at least say the right things. I can’t blame him at all for the quotes on the back. However, his best finish in five years was 75-87, and that was the 2003 season that felt like a major disappointment after the team added Reggie Sanders and Kenny Lofton late in the off-season, which brought about some hope because they already had a solid core lineup before adding Matt Stairs earlier in the off-season. Cam Bonifay was his General Manager for just two months before getting fired. Dave Littlefield was his replacement and he wasn’t so demanding.

I like that Topps decided to add a second photo on the back of their cards in 2001, but this isn’t a second photo, it’s just a cropped version of the front photo.

This card is easy to find on Ebay, with 21 current auctions listed. You can get this card for under $2 delivered, but there are a surprising amount of options with high shipping costs. There are also other options besides the card base card above. There’s a gold version that had 2,001 copies printed. There are four of those listed and three are over $5 delivered. There’s also a Chrome version and that’s cheaper than the gold one, though I’m not 100% sure that’s supposed to play out that way. Then there’s a Chrome Retrofractor, and that fancy card is going for $2.25 delivered. My money is on that card if you want a recommendation.