Back in early November, I realized that I had been unknowingly ignoring the 1952 Bowman set for the first 20 months of this Card of the Day series. It’s a great looking set in my opinion, so it definitely wasn’t intentional. I posted an article that day about pitcher Ted Wilks, who born that same date back in 1915. I promised to go back to the set in the not-so-distant future because there were plenty of great action photos (technically artwork based on photos) in the set. The perfect opportunity came up today with infielder George Strickland, who played three seasons in Pittsburgh, but only the 1951 season was a full year. That led to him being put in the 1952 Topps and 1952 Bowman sets. While I love the design of the 1952 Topps set and the history/significance behind the set, the Bowman Strickland is much nicer (again, my opinion, feel free to disagree). We have featured the 1952 Topps set three times here, so that difference in usage also helped my decision. So here’s a look at the 1952 Bowman card of George Strickland. 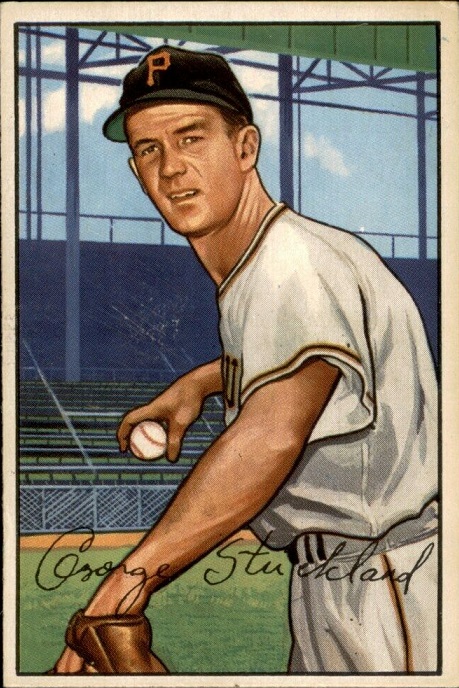 Bowman didn’t really put a lot into any of their front designs. This one is about as basic as you can get. Small white borders, black box around the photo, facsimile autograph on the card. That’s it. The 1951 Bowman set had the player’s name in a small black box with white writing, with the same border design. That was more effort than the 1950 set, which has no name on the front. They switched things up a bit in 1953 by repeating the 1950 design, but using a different size for the cards. Finally in 1954 they put a little effort into the design and came up with something completely different. These cards are about the artwork and they have some really nice looking ones. This one falls in the middle. It’s much better than the portrait style look, but there are some more interesting poses/backgrounds in the set. 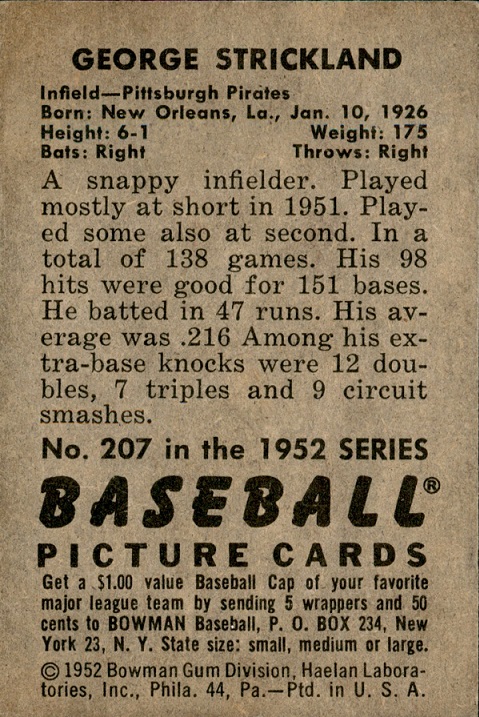 The back has a small bio section for Strickland, who was very early into his ten-year big league career when these cards came out. That’s why all of the facts there are about his 1951 season. His only other big league time was 23 games and 32 plate appearances in 1950. The bottom of the back is an ad for a baseball cap of your favorite Major League team, which cost five wrappers and 50 cents. Believe it or not, but it would be cheaper to buy a hat instead of taking them up on their deal. Of course it doesn’t say it has to be a Bowman wrapper, so you could just send them gum wrappers and hope for the best (it’s not going to work, but for 50 cents and a stamp it’s worth a shot). Don’t forget to state the size!

There are currently 16 active auctions for just this card, plus it can be found in auctions with other Bowman/Pirates cards. Just looking at the 16 solo auctions on Ebay right now, the price ranges from a low of $9 delivered (five auctions, two have best offer options) up to $55 delivered. Most are around $9-$15. There’s a really interesting auction for two cards, one being signed. The seller wants $28 delivered, but there’s a best offer option. The only graded copy is done by Beckett and it’s autographed, going for $27 delivered.