The Pittsburgh Pirates and Brooklyn Robins joined forces on this date in 1918 to make a five-player deal with some big names. The trade is still well-known to this day because the teams were exchanging future Hall of Famers. Brooklyn got the better of the deal because their new Hall of Famer was Burleigh Grimes, who won 270 games in his career. The Hall of Famer coming to Pittsburgh was outfielder Casey Stengel, who was a fine ballplayer, but he’s in Cooperstown for his managerial career. Lost in that famous deal due to the star power and the 104 years that have passed, is infielder George Cutshaw, who was a solid player over 12 seasons in the majors. He put in four seasons with the Pirates, compiling 7.5 WAR during that time before the Pirates placed him on waivers during the 1921-22 off-season.

There aren’t many choices for cards showing Cutshaw on the Pirates, but I was able to find a decent scan of his E220 card, which was released in 1921. This was the first usage of a popular photo of Cutshaw, which showed up in numerous other sets over the next couple of seasons when he was with the Detroit Tigers. I guess you could sneak one of those cards through in this series, but I went with the one that actually identifies him as being with the Pirates. So here’s a look at the 1921 E220 card of George Cutshaw. This is our second look at this particular set, with the first one featuring Hall of Famer Max Carey. 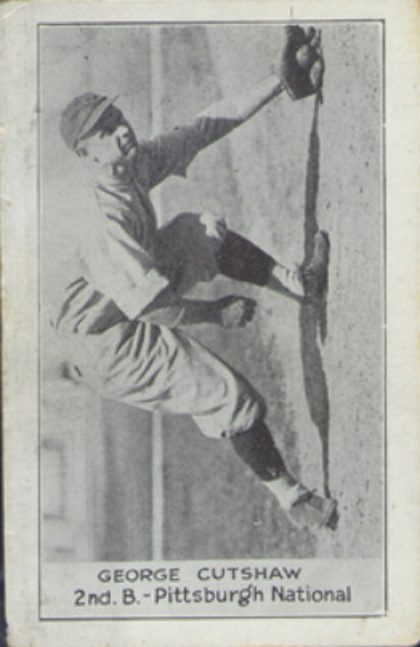 I added the horizontal view for an easier look at the photo: 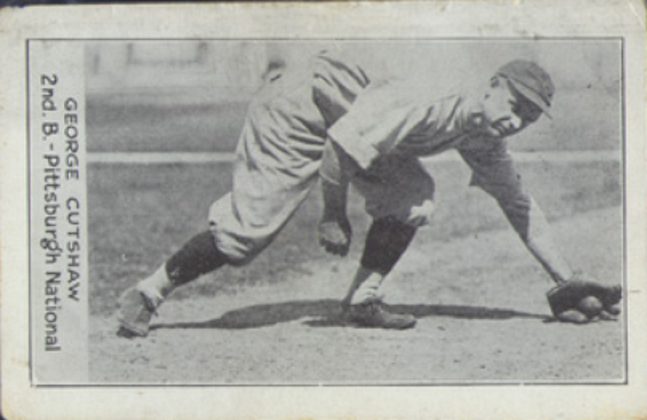 I really like this set even though it isn’t much different from other sets of the era. I like the writing style on the front. You don’t see much like that from back then. This pose is a great staged action photo that was actually fairly popular with Pirates fielders. I just recently picked up 1922 cards of first baseman Charlie Grimm and left fielder Carson Bigbee, and both cards have similar poses showing them fielding a grounder. At some point I’d like to add this Cutshaw card to that outstretched fielding a grounder subset. 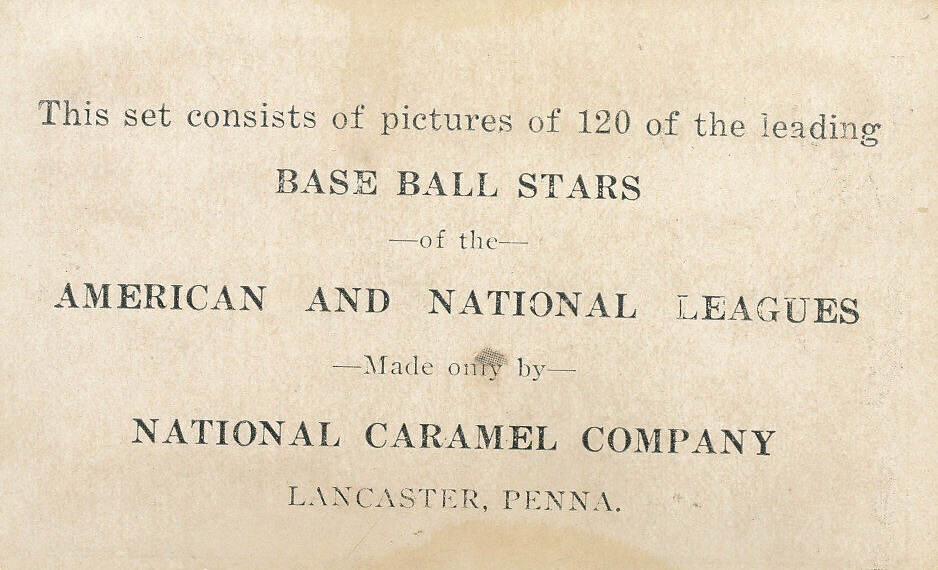 It’s a standard advertising back on this card, letting you know that it came from the National Caramel Company and the set consists of 120 photos. There’s nothing specific about any of the players on the backs.

If you’re interested in this card because of the pose, I’d suggest a different set, unless you have a nice sized card budget. This particular card has just one example on Ebay, and they are asking $300, though there’s a best offer option. This same pose is in the 1922 Exhibits set and there are multiple copies on Ebay, ranging from $48 to $110. Technically the high price is much higher, but there’s a low grade graded copy that someone is asking over $300 for, and that’s a bit high. If you want to go high end, there’s a 1923 Willard’s Chocolate in PSA 5 for $475. I don’t know off-hand if that’s a good price, but I do know that it’s a rare card, especially in that condition. Unfortunately for me, there was a low grade Willard’s Chocolate ungraded from a reputable seller, and it went for $25 one day before I’m writing this article. I would have bought that if I saw it. That same pose is also in the 1922 sets called E120 and W573, though no examples are currently on Ebay.