I’m a fan of the 1955 Topps set, but it has a rough place in baseball card history in my opinion. I really like the idea that Topps came up with that year, using a horizontal layout for every card, along with a portrait picture and an action shot, putting both on the front. I could imagine me in late 1955 wondering what Topps could do for an encore to this set. In my opinion, it’s easily the best of their first four full sets and I don’t hate any of the other three sets. It would be tough for Topps to top. However, Topps took a great idea and made it even better in 1956. They kept the horizontal layout, kept the portrait/action photo combos, but instead of the plain one-color backgrounds on the 1955 Topps card, they added a full baseball scene as the background, so the action shot literally showed the full action photo. In other words, the 1955 Topps set is like a big bowl of chocolate ice cream, while the 1956 set is like finding out you can add toppings to that ice cream and make it even better, which then makes that plain bowl pale in comparison.

You would think that I mentioned ice cream because today’s Card of the Day subject has the last name Freese, but I really just wanted ice cream and it’s a happy coincidence. We already featured the 1956 Topps card of Pittsburgh Pirates third baseman Gene Freese. He was born on this date in 1934, so today’s a good day to give him a second article, especially since he put in six seasons with the Pirates and deserves more notice. So here’s a look at his rookie card from the 1955 Topps set. 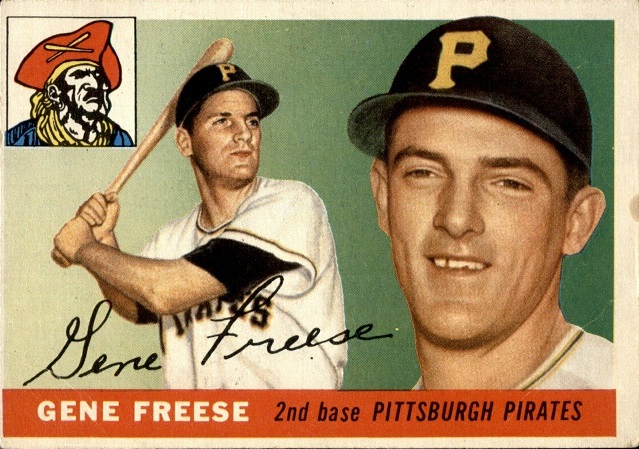 For the portrait shot on this card, Topps used it in both the 1955 and 1956 sets. I like the batting pose look here, and I like that the 1955 Topps set had that old school Pirates logo, which is a great addition. Freese is certainly an oddity in my book. I think I actually like his 1955 card better, and it because of the nicer action photo, plus the logo, compared to one of the more boring offerings for the background shot on the 1956 card (see link above). 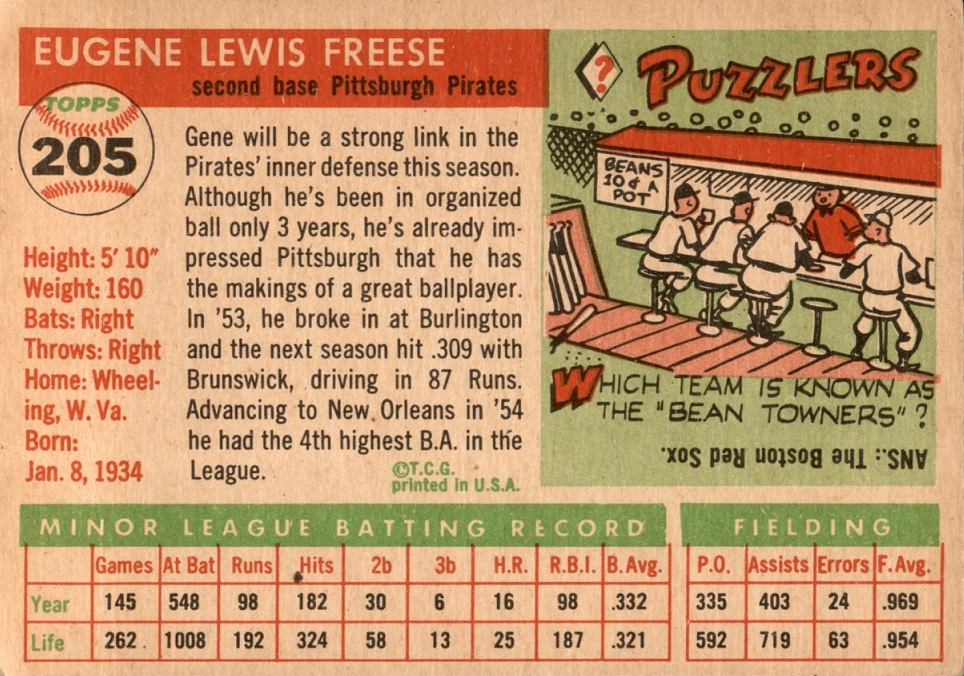 The back is certainly colorful and busy, with a nice Christmas feel to it. The backs for this year included just the last year of stats and lifetime stats, regardless of how many years the person has played. In this case, Freese didn’t make his big league debut until the start of the 1955 season, so the stats are from his brief minor league career, though he played more minor league games later in his pro career. The trivia question suggests that players from the Red Sox paid ten cents for a pot of beans during games. No wonder why they went so long without winning the World Series. I believe they took the bean stand out after the 2003 season, but no one ever makes that correlation.

If you’re interested in this card, you’ll be happy to know that you have numerous options on the Ebays.  This card is costly in high grade. There are multiple PSA 7 copies available and the lowest priced one is $350. There’s a PSA 6 for $255 and a PSA 5 for $180 delivered (more on that grade below). Here’s where things get interesting. For $175, you can get a PSA 8 O/C for you growing card collection. In cast you don’t know, that means that the card has all of the qualities of a PSA 8 card EXCEPT the centering is bad. Not gonna lie, if I was looking for a really nice looking copy, that card would be my choice because the centering isn’t much worse than most of the other cards I looked through for these prices. I mentioned there would be more for PSA 5 cards, and I wanted to share the one price above so you could see it in comparison to the PSA 8 O/C card. You can actually get PSA 5 copies (two for sale) for around $75 delivered. If you want a decent ungraded one, you will pay around $30, but there are low grade copies for under $10 delivered if you just want any copy for your collection.