In their 1985 set, Topps included a subset of cards called the Father-Son series, where they highlighted father-son combos who have appeared on Topps cards. The son in the combo also had to be an active player when the 1985 set was released. Four of the 13 cards in the subset included players pictured on the Pittsburgh Pirates, while a total of six cards featured former Pirates players. We looked at one of those cards over a year ago with the Vern Law-Vance Law combo, which was the only one that pictured two former Pirates players. The Yogi/Dale Berra card showed Dale on the Pirates, and the Bob/Joel Skinner card showed Bob on the Pirates. The Gus/Buddy Bell and Ozzie/Ozzie Virgil card featured fathers who played on the Pirates, but neither was pictured with the team on the card.

Today we look at the Dick Schofield/Dick Schofield card. The father Schofield played eight seasons for the Pirates and he’s celebrating his 87th birthday today. He played a total of 19 seasons in the majors, while his son played 14 seasons. His grandson is Jayson Werth, who played 15 years in the majors. That’s a lot of baseball in one family. Here’s a look at card #138 from the 1985 Topps set, featuring the Schofields. 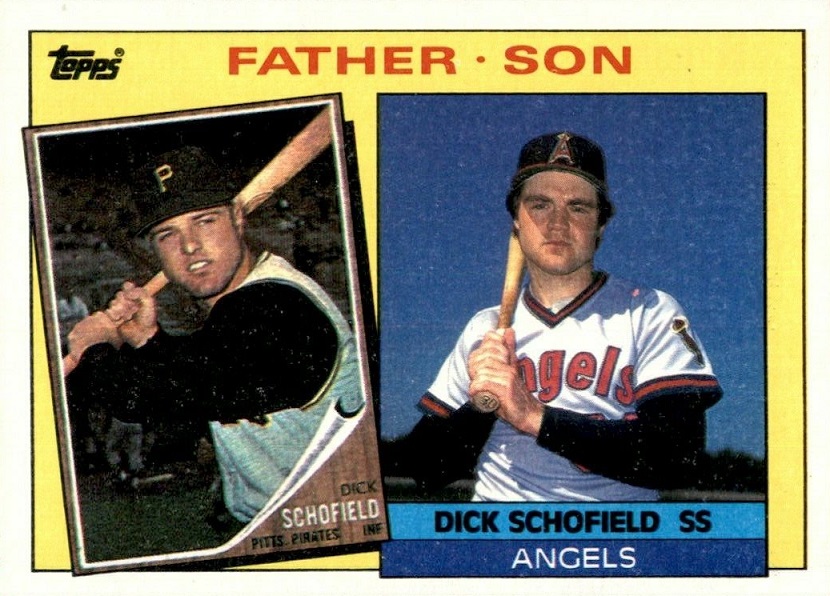 Topps decided to use one of my favorite sets here for the older Schofield, featuring him on his 1962 Topps card. I just love that wood-grain look and the bottom corner of the photo folding up. Such a great all-around look to those cards. The younger Schofield only had one Topps card isn’t prior to 1985 and they didn’t use that photo (the 1984 Topps cards actually had two photos on the front), so this is an added photo for him 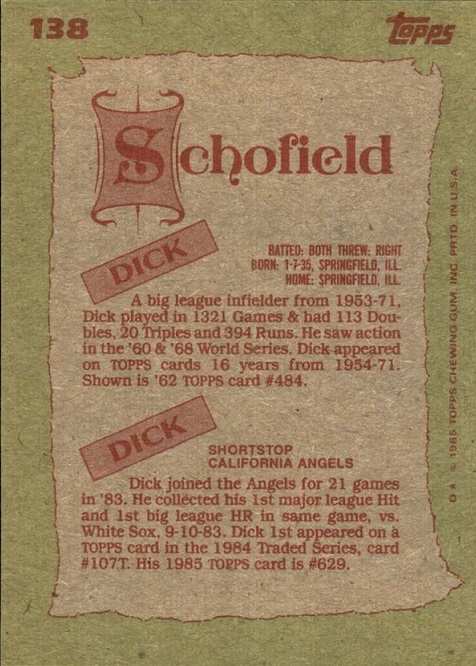 The back includes a little bio on each player, as well as their baseball card history with Topps. The older Schofield had plenty of cards to choose from for the front picture. Topps notes that they included cards of him in their sets 16 times during his 19-year career. The younger Schofield had very little experience at the time of this set being released, debuting in September of 1983 at 20 years old. He played 140 games in 1984, but he managed just a .193 average and a .527 OPS, so he was probably a little rushed to the majors. It’s a bit strange that they only included the batted/threw for the older Schofield, but I guess it’s because the younger one has a regular card in the 1985 set. For those wondering, there isn’t a Sr/Jr here because they don’t have the same first name. The older Schofield is actually named John, while his son is named Richard.

There are a few options when thinking about purchasing this card. The most expensive one is signed by both of them and graded/authenticated. That has $80 tag and a best offer option. There’s also one signed by both, but not graded. It’s a reliable seller and it’s going for $21.50 delivered, though it too has a best offer.  after that, it’s just regular auctions, though one is five copies for $5.50 delivered. There’s also an auction for $2.75 (or best offer) that includes this card and the Skinner father-son card. You have plenty of options for the solo card for about $2 delivered. For around $6-$8, there are two options for buying the whole 13-card subset together in one lot.

7 Jan at 6:00 am
Card of the Day
Dick Schofield, Featured