Today’s This Date in Pittsburgh Pirates History article covered seven obscure Pirates born on January 6th, who spent a total of 11 seasons with the team, though many of those were partial seasons. We have already featured Doe Boyland in the Card of the Day series. He played three seasons with the Pirates totaling 19 at-bats in 21 games. He has a little more recognition than your average 21-game position player because he was a member of the 1979 World Series champs.

The only other player born on this date to play more than one season for the Pirates was outfielder Lee Walls, who played for the 1952 and 1956-57 Pirates. That made him the default choice for today’s subject, but he has two very good choices when it comes to cards featuring him on the Pirates. I had to choose between using his 1957 Topps card or his 1955 Bowman card, which are his only available cards with the Pirates. It turns out that I’ve been making this choice over the last 22 months and didn’t know it. I decided to use his 1955 Bowman card because that set has been featured here just two times, while the 1957 set has been used in this series three times. It’s time to even that out by looking at card #82 from the 1955 Bowman set. 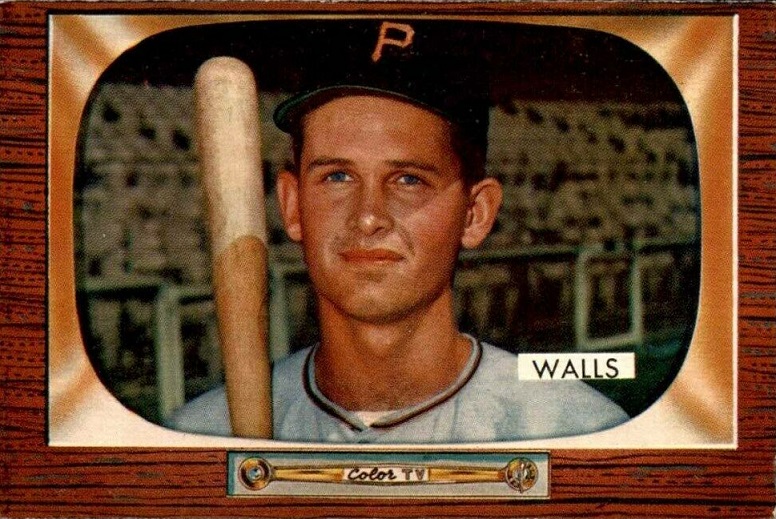 I am a big fan of the 1955 Bowman set. A color TV was both new and a big deal back then, so Bowman decided to use that to their advantage and they came up with this great looking set. When I got my first full-time job out of high school, one of the first cards I bought was a 1955 Willie Mays. I was buying cards of great players and went for cards that had eye appeal, and the Bowman color TV design caught my eye.  This is actually a rare picture of Walls because he’s not wearing glasses. Almost every other photo you see of him, he’s wearing glasses.

Another oddity here is just the fact that he’s included in this set. Walls played 32 games for the 1952 Pirates, which was his first big league action. He spent the next three full seasons with Hollywood of the Pacific Coast League. So if he was in that league for all of 1954 and all of 1955, how (and why) exactly did he end up on a 1955 card? My guess is that they just assumed that he would make the Pirates out of Spring Training in 1955. He came close, getting sent down on April 10th, three days before Opening Day. 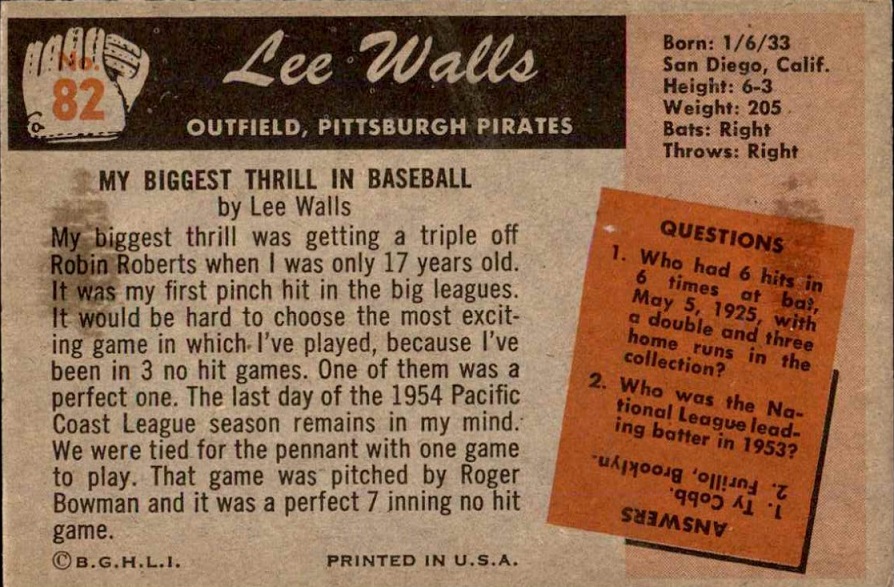 I decided to use this particular back scan despite the stains because people often got cards with stains on the back direct from the factory. In the early years, there was the famous T206 set, which had Polar Bear brand tobacco that often left stains on the cards. In later years, gum stains or wax (from sealing the pack) would get on the cards.

I always find the biggest thrill answers fascinating. He didn’t have a lot of options really, but he lied about his age on the card (or Bowman got it wrong), because he was 19 at the time. The hit he was taking about came in the bottom of the ninth in a game that the Pirates were losing 10-4 (they lost 10-5) and Roberts won his 20th game, while the Pirates dropped to 35-86…that’s rough. Just two days before that game, he homered in a 5-2 win. Three days afterwards, he had two hits, a run and an RBI in a 3-2 win over the Brooklyn Dodgers. I guess he knew that Roberts was a future Hall of Famer and that made it more special, despite the lopsided loss.

If you’re interested in this card, there are tons of options available. Ebay has 64 auctions going right now for this card, ranging from a high price of $75 (with a best offer option) for an SGC 88 card, down to one that is going for $2.49, which appears as if someone folded it in half. You can get a solid mid-grade copy for about $10, with many cards within a few bucks either way of that price. There’s a PSA 6 for sale for $23 and a PSA 7 is going for $40 delivered.