One of the more interesting ventures by Topps is the Holiday set. It’s one of the more festive baseball card sets put out. Topps takes a card that was already produced by them earlier in the year, then adds a bit of holiday flair to each card, with some going more in depth in that direction than others. The cards come from the series 1, series 2 and Topps Update sets. There are 220 cards included in the set, plus a large number of extras and variations that makes the actual number of cards much higher.

One of the more interesting decisions made to include cards in this set was the choice of John Nogowski on the Pirates. These cards just came out recently. You can go into a Walmart (not a plug, that’s where they sell them) right now and buy a pack or two or more. Nogowski, who turns 29 years old today, is still pictured on the Pirates. The original card makes sense. He was included in the Topps Update set after he joined the Pirates. However, he was released by the Pirates in September and signed with the San Francisco Giants three days later. Since then, he was picked up by the Atlanta Braves in the minor league Rule 5 draft. That’s means that this brand new card is two teams behind. It’s Nogowski’s birthday though, and I’m writing this a few days before you’re reading it, so I’m still full into the holiday spirit, making this the best choice for a featured card today. 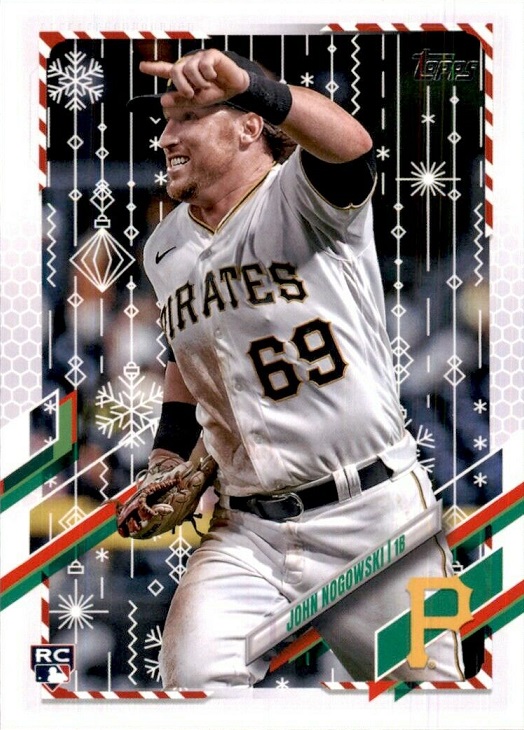 This card has a similar design to the base card from the Update set, and the picture used is exactly the same. However, if you look closely, you can see about 100 decorations or lines going down the front. Also, the red and green colors here, along with the candy cane striping, are both different from the original card. You know what, it would just be easier to show you the regular/original card so you can see how it looks so similar and so different at the same time.

One interesting thing here is that both cards have the “RC” symbol, letting you know it’s a rookie card. Collectors will tell you that only the Update card can be his rookie card, since it was printed and released months earlier. 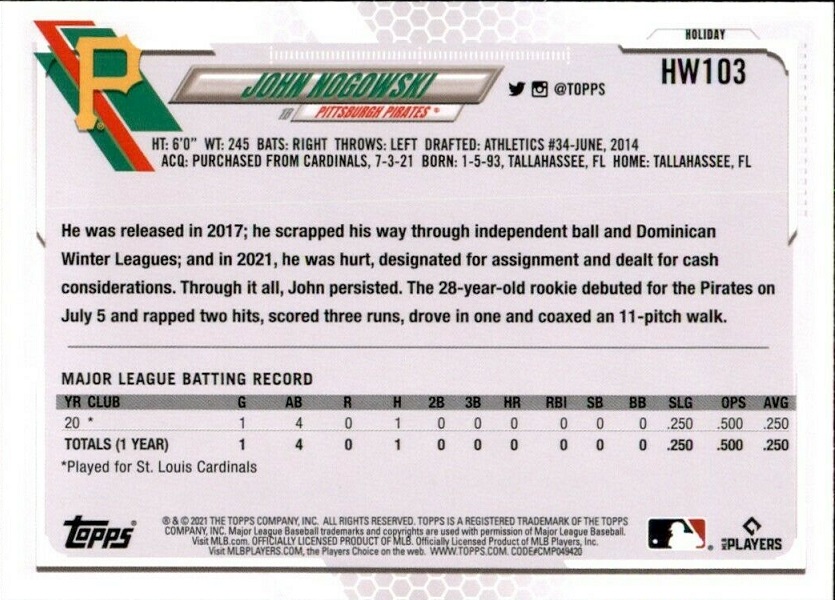 The back didn’t change from the Update card (except the red and green colors), so you only have his stats from his 2020 big league season, which was one game (his big league debut). They really did just add holiday stuff to the cards and repackage them, though collectors are out there hoping to get one of the rare insert cards (see pricing section below). I’ll also note that the card number is different and it actually says “holiday” above the number, just in case you didn’t know by looking at the front of the card.

If you’re interested in this card, there are plenty of options, even outside of just getting the base card. You can get the regular card from multiple seller for under $2 delivered. There is also a Holiday Metallic card, which goes for a slightly higher price, but there more than a few available on Ebay right now. Then there’s a 1-of-1 card called a Gold Metallic Holiday. Finding specific players for sale is difficult, but Nogowski just happens to be up. That card is only $300, and it comes with a best offer option.