The 1993 Fleer Ultra set is one of my favorites from the 1990s. I don’t want to fully commit to it just in case I’m forgetting something else, but this might be my favorite set of the 1990-99 time-frame. I’ve featured it here twice already, looking at the rookie cards of pitchers Blas Minor and Tim Wakefield. This particular one is pretty far from being a rookie card. Veteran outfielder Lonnie Smith signed with the Pittsburgh Pirates on January 4, 1993. He was already 37 years old, and he had 15 seasons worth of experience in the majors when he joined the Pirates.

As you might guess by Smith’s inclusion in the set, these cards didn’t come out before the season started. In fact, they have Smith pictured in a Pirates uniform. Since he was traded before the 1993 season ended, he didn’t show up in many sets. Anything printed early for 1993 didn’t include him, and he was gone before the 1994 early release cards went to the printing presses. Here’s a look at card #456 for the 1993 Fleer Ultra set featuring Lonnie Smith. 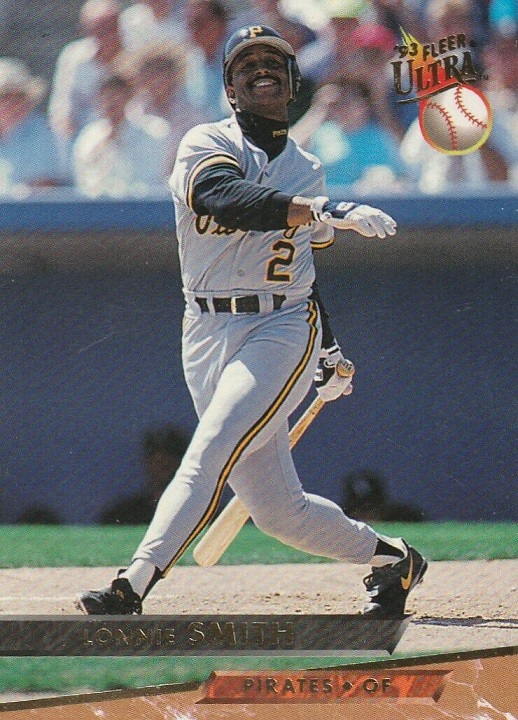 This set is highlighted by strong photo quality and a glossy look to the cards. This is one of the earlier “no border” cards and I’m a fan of that look. Obviously some border designs work well, like the 1962 Topps or the 1987 Donruss, but this card would look completely different if they just went with a thin white border all around.

Fleer did one thing I don’t care for, plus this card has an unusual highlight that helps balance out that one flaw. This is one of the few sets when the logo actually adds to the look of the card. The fire baseball, with gold writing logo is really eye catching. The thing I don’t like is the fact that they put the player names in dark writing in a dark box. Look at how big that scan is and that name is still a little difficult to read. Now picture a set full of cards like that…There’s a fix to that problem on the back. 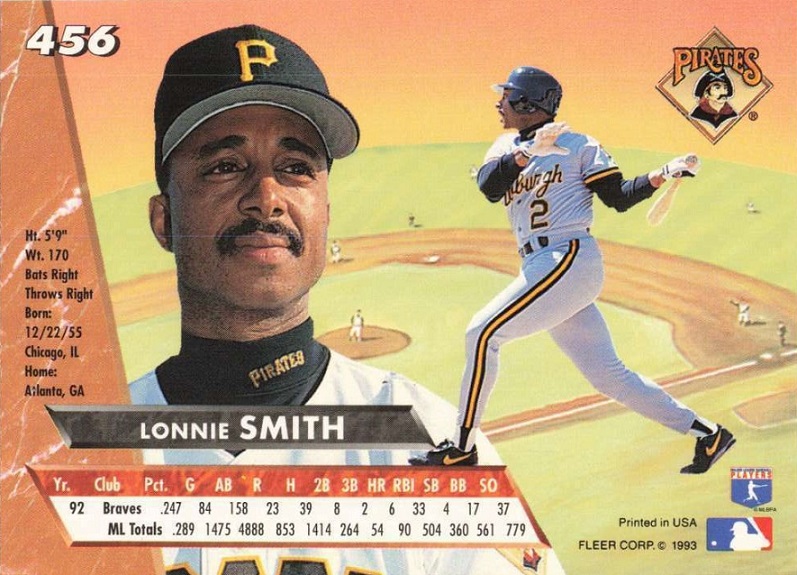 This set might just have the best backs in the business. You get two new photos of each player, and who here doesn’t like the 1993 uniform style (that wasn’t a question because everyone does). I personally don’t care for turtleneck shirts, but I like that look with the team name. The background behind the player is outstanding looking, giving the card a bit of a throwback feel. Then you get the great circa 1993 Pirates logo in the top right, which is always a welcomed addition to a card. The player’s name is easy to read on the back, while using the same box as on front. The only thing I don’t like is the limited stats, BUT I’m willing to sacrifice extra stats because they would take away from the great back idea. So in this case, limited stats are completely acceptable.

If you’re interested in this card, there are nine auctions available on Ebay right now and none of them have anything special going on, so you’re basically just looking for the cheapest one (be sure to check shipping costs), while making sure the seller is in good standing. In this particular case, four sellers have this card in the $1.70 to $1.98 price range. Happy collecting!