First baseman Gus Suhr, who was born on this date in 1906, is one of the more under-appreciated Pittsburgh Pirates. He played ten seasons for the team, set a club record (and at the time a National League record) for consecutive games played, and he had three seasons with 100+ RBIs. During the 1933-36 four-year stretch, he had four straight seasons with 30+ doubles and double digit totals in triples and homers. Here’s a list of all of the players in Pirates history who have reached 30/10/10 minimums in doubles/triples/homers in four consecutive seasons (note: list is in alphabetical order):

That was a fun list. Now let’s put it in chronological order:

Once again a good time was had by all during the making of that list. Suhr has been included in our Card of the Day series three times before today, though he was a tag-along in two articles in which the card had four players and he was not the main subject. That usage is a lot like his time with the Pirates. He’s overshadowed by being on a team that had Lloyd Waner, Paul Waner, Arky Vaughan and Pie Traynor on offense. That’s four Hall of Famers in his lineup. For the 1933-34 seasons, the Pirates also had Freddie Lindstrom, adding a fifth Hall of Famer. So it should come as a shock to no one that a non-Hall of Famer gets lost now in that same lineup. I can help out his legacy a bit by bringing him back for a day with his history bio and today’s Card of the Day subject, which is his card from the 1934 Batter Up set. This one is a bit different than your average card. 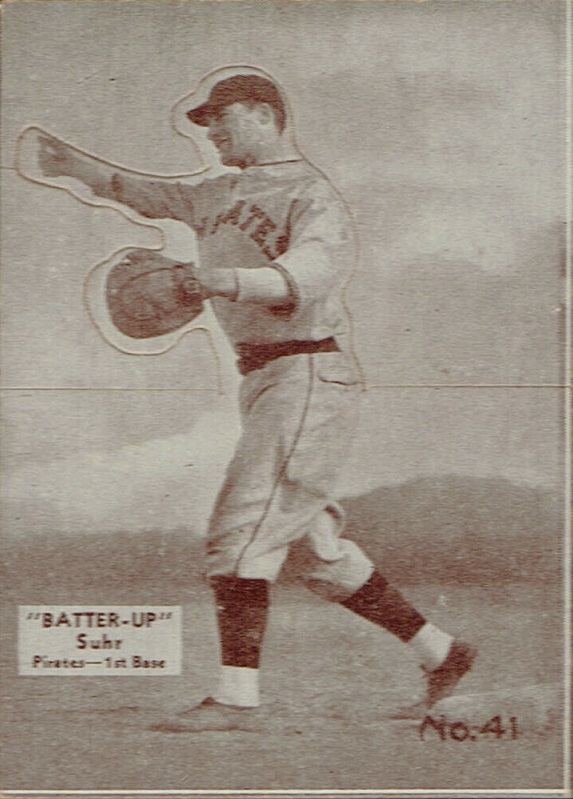 You might be able to tell just by looking at the card, but if not, this card can stand up on its own. The top half of Suhr pops away from the card, and the bottom half acts as a stand. They gave the cards the clever name of Batter Up. These cards came in different colors as well. This is my favorite look, but a quick search on Ebay shows this card also coming with a blue tint and a tint that’s called purple by most, but it’s more of a pinkish/purple color. A Google image search didn’t come up with any other colors for Suhr, but there are other colors available in the set.

That particular uniform look you see started in 1933. Suhr debuted with the Pirates in 1930, and his first two seasons didn’t have any logo/writing on the front of the jersey. In 1932, they did a one-year switch to a large “P” on the left chest. They then went to “PIRATES” written across the front in 1933, which lasted until 1937 in that style.

These cards are worth more if the original owners didn’t bend them like they were supposed to do. Without that bending, the cards stayed in better shape. Suhr is a common card from the set, which is fairly easy to find, keeping in mind that we are talking about a card made 88 years ago. Suhr also has a batting pose from the set that appears to be more difficult to find. The prices are higher and the fielding pose outnumbers the batting pose 13-3 in live auctions. The only sold auction in the last three months was a pink/purple fielding version in decent shape for $20 plus shipping. For the active auctions of this particular pose, they range from a very high priced one at $525 for a PSA 7 (It has a best offer option), down to three low-grade examples in the $10-$20 range. You probably want to go a little higher, unless a low grade example is well enough.