Today’s Card of the Day can technically be called two cards. I decided to use this particular card(s) because 2012 was the first year I was able to find (counting backwards from 2021 down) without a card so far in our Card of the Day series. I didn’t pick Kevin Correia for any other reason than I searched “2012 Pirates” in the baseball card section of Ebay and the word “error” in the title caught my eye. This particular card has two small errors on the back and I’ve included scans of both so you can look for the differences. The errors aren’t that exciting, but they might be a little difficult to find, so don’t set your hopes too high. Anyway, here’s our first featured card from 2012, along with the first appearance of Kevin Correia in this series. 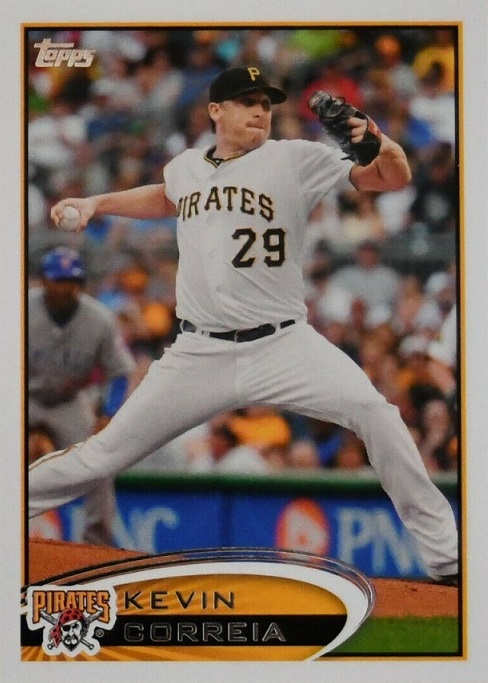 Since this is our first card from 2012, let’s critique the design. The white border look is a typical starting point for cards. The Pirates team colors around the black frame of the photo is a nice touch. Including the Pirates logo is always appreciated. The section with his name is okay. Nothing else to mention. Overall on a scale of 1 to great, I’d rank it as not bad. They used high quality photos obviously and strong card stock, but neither is anything special for the year that they were released. It’s a very middle of the road look. No real complaints, no significant highlights. 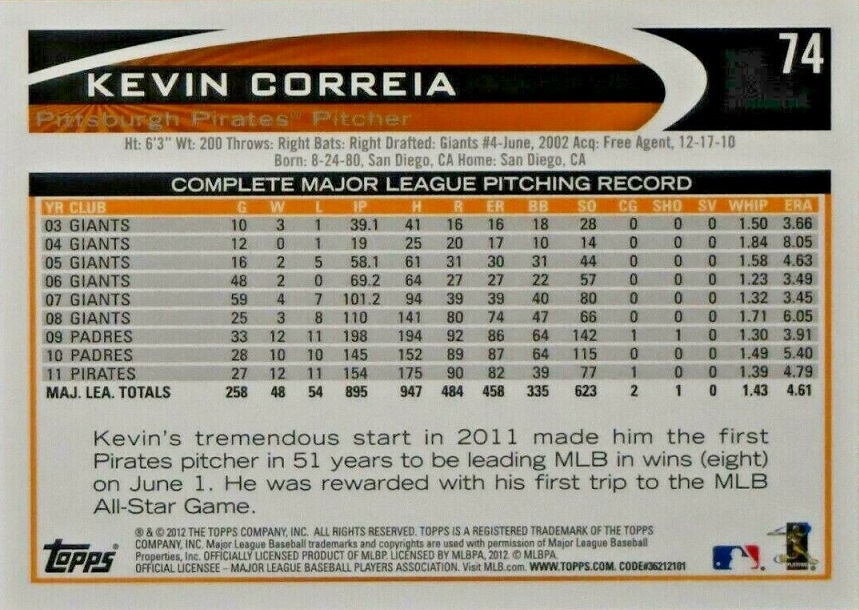 Here’s the error version, which obviously came out first 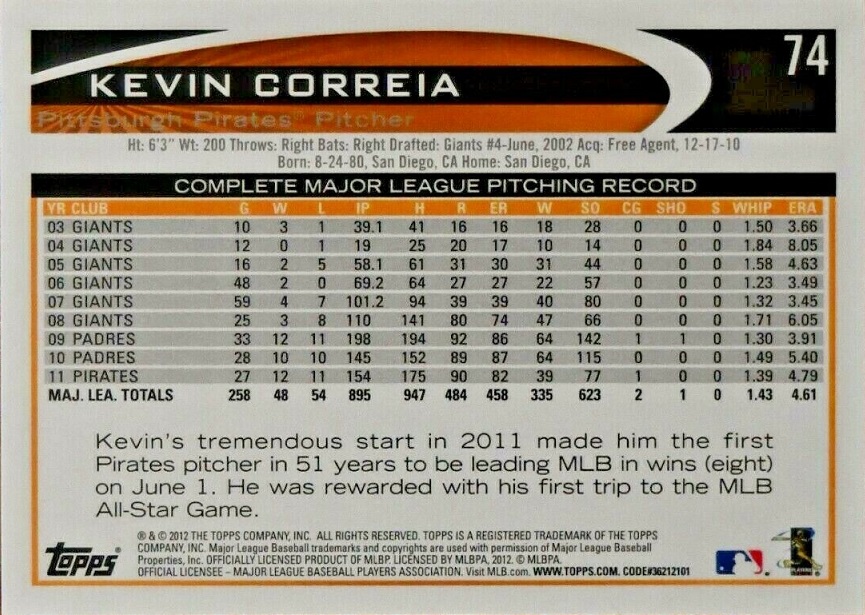 You can choose your own adventure now. Either stop reading at the end of this sentence and find the error. Or you can scroll down and read about the error…

Okay, here’s the difference between the two cards. In the line above the stats, where they show you the stats that you are looking at, they mistakenly used “W” for walks and “S” for saves. In the top scan, you can see that they switched it to the more recognizable BB and SV abbreviations. I warned you that is was nothing exciting, but it’s an error that they corrected, so it makes it somewhat more desirable than a normal common card. The back has some similarities to the front. Nothing exciting, nothing bad. Topps played it safe in 2012, not a bad thing because they have missed some of their shots over the years.

An interesting note here is the bottom part under the stats, where they tell you how good the start of his season was in 2011. He made his first (and only) All-Star appearance that year. What they don’t tell you is how he did after June 1st. He posted a 6.17 ERA over his final 14 starts of the season. That explains how he made the All-Star squad while finishing the season with a 4.79 ERA.

If you’re interested in this card, there are more options beyond the corrected and error versions. One auction on Ebay has both of those cards for $6 delivered. There’s also a blue border version from Wal-Mart, which is much tougher to find than the normal card. The only one for sale for that example is $5.30 delivered. There’s a red border one that was found in Target. That also has one Ebay example for sale and it’s $4.90 delivered. Then there’s a mini version, which can be found for as little as $2 delivered. There’s also a gold border and gold sparkle version, both are around $4. Or you can just get a regular one for around $3. Sounds like a lot, but there are only 17 total auctions, so there aren’t many of any particular version available.