Today’s Card of the Day article is the first time that we look at the 1995 Topps Stadium Club set. Right-handed pitcher Gary Wilson only pitched in the majors during the early parts of the 1995 season with the Pittsburgh Pirates. His overall pro career was a bit brief as well, with seven seasons, and all but ten games were spent with the Pirates. Coincidentally, he pitched ten big league games with the Pirates, throwing a total of 14.1 innings in the majors. He didn’t make it on to many big league cards, though he was included in a few minor league sets, so there are some alternative choices that still show him with the Pirates. I chose the 1995 Topps Stadium Club set, seeing as it hasn’t been used here yet. It’s a front that checks a lot of boxes are far as design/looks, but the back is bad (that’s a nice way to put it). So here’s our first look at this set, and a first look at a card featuring Gary Wilson. 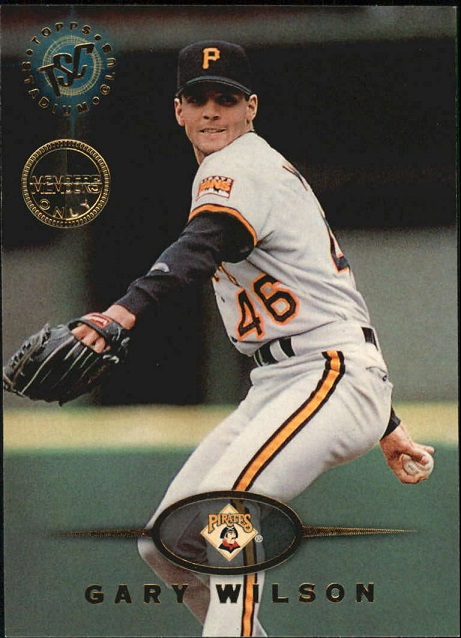 This card would be one of my favorites if it were not for those two logos at the top left. Anyone who collects cards is used to a company logo being on the front, but how many logos do you see that have a drop-down screen for a second logo? Neither looks good, but when you add a second blah logo it really stands out. I really like the rest of the card. I’m a fan of the borderless fronts, and that Pirates logo in the center really looks nice like that. Kudos to whoever came up with that idea. They also got a great action shot of Wilson. I mentioned this recently, but I really hate the amateur looking FANS patches from the 1995 season. We get it, you were trying to apologize to the fans for the lockout interrupting two different seasons, but that doesn’t explain why you held a contest for design ideas from first graders to pick a patch. If I had any photoshop skills I’d make this card look great with a few quick clicks. 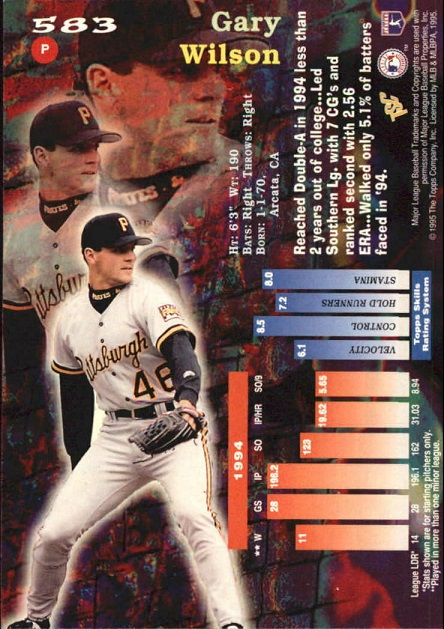 Pardon my language, but what the actual double chocolate fudge is going on with this back? Why did they use the same photo of Wilson three different times? And how many times do you have to turn the card to be able to read the stats on the back and the small print writing telling you what you are looking at? And what is the background design? I’ve never seen such a drastic difference between the front and the back of a card (that’s not true, blank back cards from the early years are obviously much different, but go with it here). I feel like this back should come with an apology. It’s the same photo three times!

If you are interested in this card, I have good news and bad news. The bad news is that you have to take the back too if you want the front. The good news is that the card can be found cheap on Ebay, with a few options under $3 delivered. Just watch the shipping costs before purchasing. One seller actually has the option to buy up to 80 of these cards. Their shipping is way too much for one common card ($3.50), but it’s a flat rate shipping, so you could get all 80 if you wanted for the same shipping cost. If you want to pay $82.70 for his cards, then you have the option. I know no one here is going to do that, but for future reference, contact the seller first if you ever want to buy in bulk. For this particular card, for example, I wouldn’t be surprised if they took $15-$20 for all 80 if you asked. It can’t hurt to ask if you do see an auction like that for a card you desire multiple copies of for your collection.