Today’s Card of the Day features a photo that was used in multiple sets over the years, which was actually a fairly common practice back in the early 20th century sets. This particular scan comes from the M101-4 set, which is often referred to as the M101-4 Sporting News set. The Sporting News was a very popular weekly publication back then, which started in 1886 and ran until 2012, though the website still exists. These cards measure 1 5/8″ x 3″, which is much slimmer than modern cards, and a bit shorter as well.

Jim Viox played for the Pittsburgh Pirates from 1912 through 1916. They were his only big league team. While his defense was subpar, he had a nice little peak during the 1913-15 seasons, putting up a total of 9.2 WAR during that three-year stretch. He finished 13th in the MVP voting in both 1913 and 1914. The first year is particularly impressive considering that he would still qualify as a rookie under modern standards, and he was just 22 years old at the time. His .826 OPS that year (which was deadball era baseball at its best), was 90 points higher than the second best mark on the team (Dots Miller). It was a club that had Hall of Famers Honus Wagner and Max Carey as regulars in the lineup. 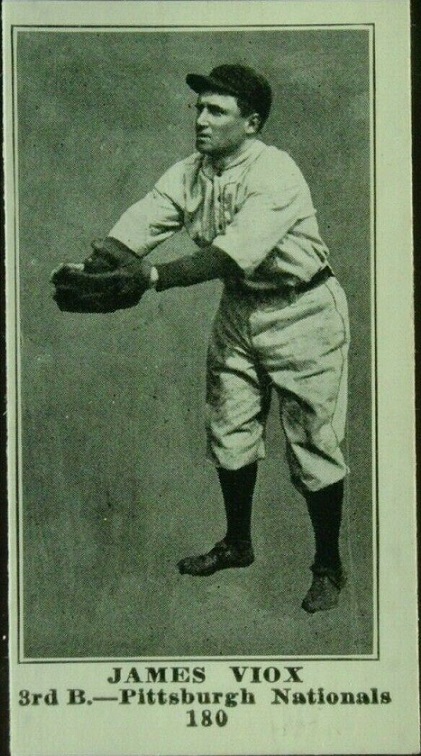 It’s interesting that these cards used real photos, but for some reason, they got rid of the background on this card. I tried looking for the original photo here, but didn’t see it during a brief search, to see why they possibly airbrushed the background. Most of the photos that popped up were this photo you see above as is. At any rate, it wasn’t a common practice to airbrush entire backgrounds in photos in this set, though they also did it on the Babe Ruth card, which is beyond popular because of how early it was in his big league career.

Viox looks small in this photo and he was small for a baseball player, even by 1916 standards. He stood 5’7″, 150 pounds. The card says that he was a third baseman, but he was never a regular third baseman. In his five seasons with the Pirates, he played 422 games at second base, 34 games at third base, and 20 games at shortstop. Those games at third base were spread fairly evenly between three seasons. There is a small window where that position made sense though, and it was when he started the first 11 games of the 1916 season at third base. However, he didn’t play the spot again after that point. The fact that they listed his position as third base helps date the production/distribution of this set. Viox is listed as a second baseman in the 1915 M101-5 set. The two cards are almost identical except for the “2nd vs 3rd” part, but you can easily tell apart the two years because of that change.

I mentioned that this card is blank backed, but cards from this set can be found with different advertisements on the back. That same thing goes for his 1915 M101-5 card. There’s also another set called the D329 Weil Baking set, which uses the same photo. Those are easily distinguished by the Weil Baking advertisement on the back.

If you’re interested in this card as shown, you’re really limiting your options. If it’s just the pose/look of the card that interest you, then you should be open to any set/back from that era. Some are worth more than others, but you will figure that out if you see it listed. For example, the Weil Baking card  was listed recently for $258 delivered and it sold, though it had a best offer option and the actual final price isn’t available. Then you could find the one in the scan above, which was listed at $45.25 with a best offer, and it too sold. Your other option right now, since none are actually live on Ebay as a I type this up, is to get one of the reprints. Those will cost just a few bucks. Those work great if you’re a budget collector, but some people also use reprints as placeholders until they can get the real thing.