Today’s Card of the Day features Pittsburgh Pirates outfielder Emil Brown, who played for the team from 1997 until 2001. During the 1999 season, the Pirates had Emil Brown, Adrian Brown and Brant Brown, all outfielders, but unlike the famous Alou brothers, none of the three players were related, and they never played together at the same time in the outfield. Despite playing with the Pirates every season from 1997 through 2001, Emil Brown played just six games in the majors during that 1999 season. He joined the Pirates as a Rule 5 draft from the Oakland A’s shortly before his 22nd birthday in 1996. During that rookie season in 1997, he played on the Freak Show team that competed for first place for most of the season. Brown batted 112 times in 66 games, hitting .179 with two homers, six RBIs, 15 runs scored and five steals.

Today’s Card of the Day came out shortly after that rookie season ended. It’s from the Fleer Ultra set, though I stepped it up a little and included a Gold Medallion card, which was a special insert in packs, making them much tougher to find than the regular base cards. This is the first time that we have used the 1998 Fleer Ultra set in this daily series. 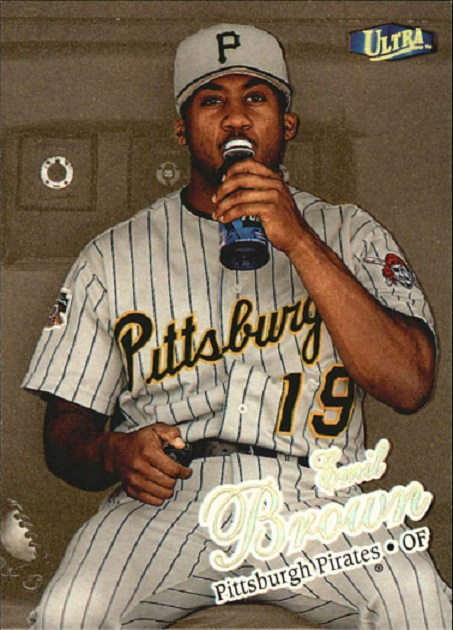 This is the first time that Brown is being featured here in a Card of the Day article. Since he played during the height of the card craze, there are plenty of cards that picture him as a member of the Pirates. This one really stood out, though “stood” might be the wrong word to use, since he is sitting down. My first thought when seeing this card was that Brown said “Let me just take a drink, then we will get this card photo” and then the photographer said “Thanks! Got it.” and left.

Someone recently asked me if I didn’t like any uniform/logos from the Pirates. This particular uniform is not one of my favorites. It looks like pajamas to me, which wouldn’t be bad if that’s what is was, but this isn’t a great uniform look. That being said, I love that logo on the left sleeve and (here comes the controversy) I’m a fan of those gray caps. I know that those caps are not universally loved, but I bought one a few years after 1997 and wore it a lot.

I mentioned that this is the Gold Medallion version that we are looking at, and I was going to describe the differences between this card and the much easier to find base card, but then I had a brilliant idea. Just show a scan of the base card and you can see the differences…so here’s the base card: 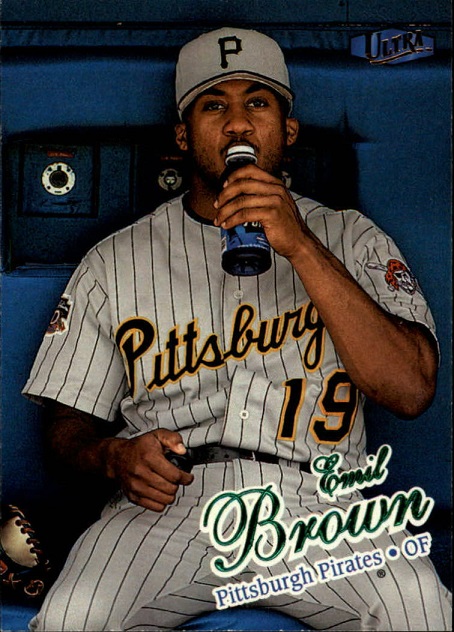 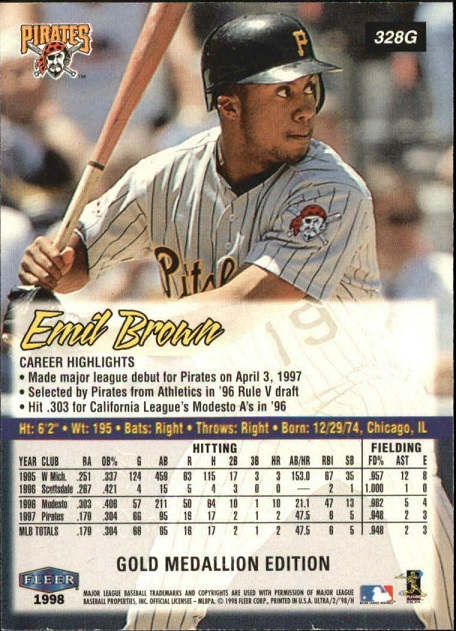 There’s a lot I like about the back. I really like the high quality second photo of Brown. They made my day with the Pirates logo added on (plus they got a good shot of it in the photo). I like that they included all of his pro stats, plus they threw in fielding stats. I like how they wrote out his name. This is a high quality back design. Well done, someone at Fleer from 23 years ago. The Gold Medallion cards actually have “Gold Medallion Edition” written on the back, but you can also see the difference from the base card in the card number at the top right, with the letter “G” added on at the end for gold.

Now, I tell you that this card is much tougher to find than the base card, but Ebay has seven cards of Brown listed right now for sale and four are the Gold Medallion version. There’s no real difference in price either, with the cheapest listing being a Gold Medallion. The reasoning behind those numbers is just desirability. The Gold Medallion cards are more sought after, so they are more likely to be listed individually. However, it’s still a common player from 23 years ago, so the price has to be reasonable to get any notice. There is one interesting auction to mention. One seller has the Pirates Gold Medallion team set of 16 cards, and they are asking $13.25 delivered, though there’s a best offer option. That might be of interest to someone.