Today’s Pittsburgh Pirates Card of the Day is a special one that I added on a day where the big names were mentioned in the “This Date in Pittsburgh Pirates History” article. I usually match the two articles up, but I moved away from that for today to feature this 1979 Topps Pirates Prospects card, and it’s not because of Dale Berra.

This card features Benjamin Wiltbanks, a pitcher who threw hard back in the day. When he was drafted out of high school in 1977, scouts had him at 93+ MPH. According to many of the old pitchers, the old scouting guns used to pick up the ball at a later point, so 93+ then, is faster than 93+ MPH now. I don’t know what kind of difference we are talking about, but we can see that difference it can make on a radar gun that shows peak velocity, as well as the velocity when it reaches the glove. Whatever is true about the guns, 93+ MPH is still good now, so it was near elite then. Players definitely throw harder now, but the difference isn’t as big as the numbers seem to indicate.

I just learned that Wiltbank passed away at 65 years old, so now is the time to take a look at his one appearance on a Topps card and tell a little more about him. Here’s a look at the card, #723 in the set, which also features Dale Berra and Eugenio Cotes. 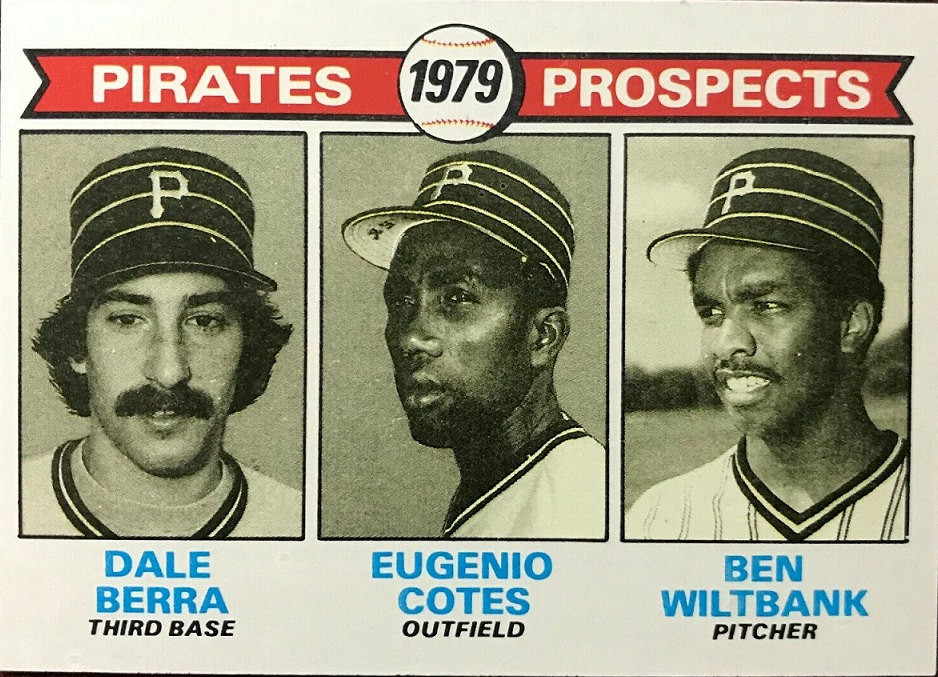 I usually talk bad about the 1979 Topps set due to the design and picture quality, but I’ll save that for another day. All I’ll say is that I have no idea why they used black & white photos on the team prospect cards in 1979. As you can see here, they had a nice mix of players, featuring a pitcher, infielder and an outfielder. Dale Berra was, and still is the player of note on this card, except for today’s article.

I usually critique the choices of Topps on their rookie cards. This would be a fairly easy one without knowing anything outside of big league stats. Berra was a solid choice, as a player and as a name to include in the set. Being the son of a popular Hall of Famer will get you noticed. Dale Berra wasn’t great by any means, but he played 11 seasons in the majors and was usually slightly above league average (WAR) in both offense and defense each year. That equals a solid choice. The other two players on the card failed to make the majors, which would look to be poor choices by Topps without any further context. Upon closer inspection, both appear to be decent/solid picks by Topps, starting with Cotes.

When these cards came out after the 1978 season, the 22-year-old Cotes just finished his third season in pro ball. He hit for power in 1977-78, combining for 87 extra-base hits those years, while also showing off excellent speed, with a total of 77 steals in 93 attempts. He saw some brief time in Triple-A in 1978 as well. You have a young power/speed guy with Triple-A experience, and no red flags, such as a low average, low walk rate or high strikeout rate. All of those categories have numbers you want to see. That’s a player you include on a prospect card. The problem here seems to be is that he was already at his peak at that time. His 1979-80 numbers are fine, nothing special, but not bad. In 1981 he went to Mexico to play, and he stayed there until he retired after the 1987 season.

Cotes was part of a group of prospects that got plenty of praise during Spring Training in 1978, but Berra was the only real contributor from the group. Look at this quote from Chuck Tanner: 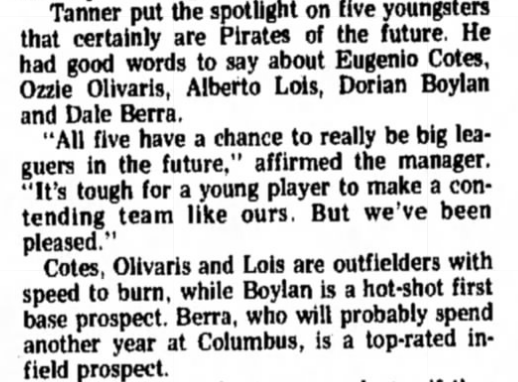 The other player is the aforementioned Benjamin Wiltbank. I certainly wouldn’t knock him in a tribute article, but there’s no reason to sugarcoat the truth here. He threw hard, had some control issues, but a knee injury in 1979, followed by an arm injury not long afterwards, derailed his career. Topps probably jumped the gun a year too early on his career, only because they usually featured players who were close to the majors, and Wiltbank was in A-Ball in 1978, where he had a 2.92 ERA in 151 innings. The problem was that he had 127 walks and 31 wild pitches, so it probably would have been best to see what he could do in Double-A first. The fact that he threw so hard as a starter gives a little leeway. He also pitched one Triple-A game that did not go well in 1978.

Wiltbank was 22 years old, had a nice ERA, and drew attention from his fastball, so I can see the reason to include him. They obviously didn’t know about the injuries coming up shortly after the card was released, but the Pirates still thought enough of him to put him on the 40-man roster after they won the 1979 World Series. That definitely says something nice about his potential. Wiltbank spent most of his time after 1979 in Double-A, where his velocity was gone after the arm injury, and then he was cut in 1983 without pitching a game, which ended his career.

Wiltbank did some scouting after he retired and a ton of coaching near his home in Delaware for many years, which is what he was doing up until getting sick in November this year. He had just finished attending a scouting school, where he earned (in his own words) “another scouting degree” in late October. You can find his photos online, and in many of them he can be seen wearing a Pirates hat (and not just the same hat each time). He never got his shot at the majors, but he tried his best to help many young kids be the best that they could be at baseball. 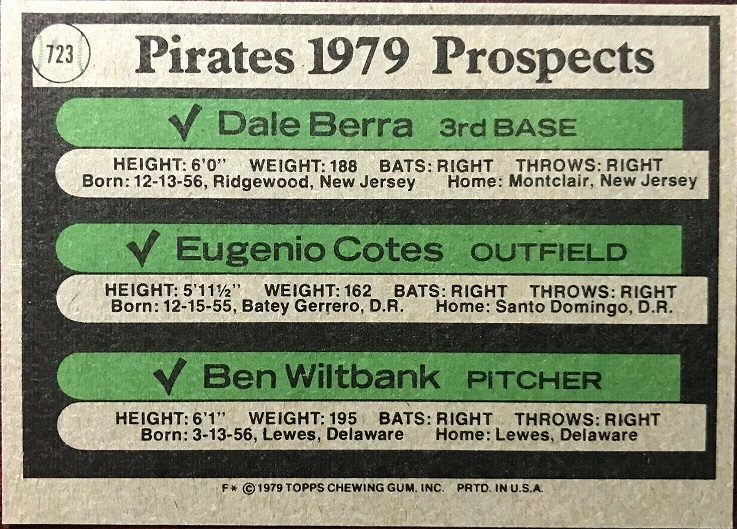