Kevin Cummings has contributed a few articles in the past for our Card of the Day feature, as well as one article for our Pittsburgh Pirates Memorabilia section. He has been kind enough today to share another card with us from his collection, as well as the background behind the player pictured. Today’s card comes from the 1887 N172 set, and it features a photo studio shot of Pittsburgh Alleghenys outfielder Tom Brown, which was taken in May of 1887. The cards were released with Old Judge cigarettes, which were produced by Goodwin & Co. out of New York. The set contains over 500 players, over 2,000 total poses of those players, and then variations on cards brings that number much higher. While a very small group of collectors have tried to acquire every pose, collecting every variation is beyond impossible and would cost into seven figures if it were somehow possible. Many variations in the set are 1-of-1 cards, so it’s impossible for more than one person, regardless of funds, to get every card possible.

Today’s Card of the Day isn’t one of those rarities in the set, but rarity is a relative term to everything else in the set. There are no easy to find cards in the set compared to any regular issue cards from the last 50 years. The card below as you see it probably numbers no more than ten examples, but there are different variations of the same exact photo, including ones that list him as playing for Boston, even though what you see below is a Pittsburgh uniform. The Old Judge card manufacturers were on top of player moves throughout the season, which led to some cards being issued multiple times.

I usually include the pricing at the bottom, but I left the below section for everything from Mr. Cummings, so we can look at the pricing here. Assuming you want a card of Tom Brown similar in condition to the one below, I’d say that it would cost around $250-$300. The lowest grade Old Judge cards rarely end for under $100 now, while some of the tougher players to find, higher grade cards or popular/rare Hall of Famers will cost into the thousands, and some can easily reach five-figures, while a few have reached six-figure sale prices over the years. Brown is a common in Old Judge terms, one of the easier players to find, but he does have one valuable variation. Old Judge issued a small amount of cards in 1890 and very few existed. One of Brown’s cards was issued that year, listing him with Boston of the Player’s League, which says “Boston (PL)” on the card. That card in decent shape will run in the low thousands. 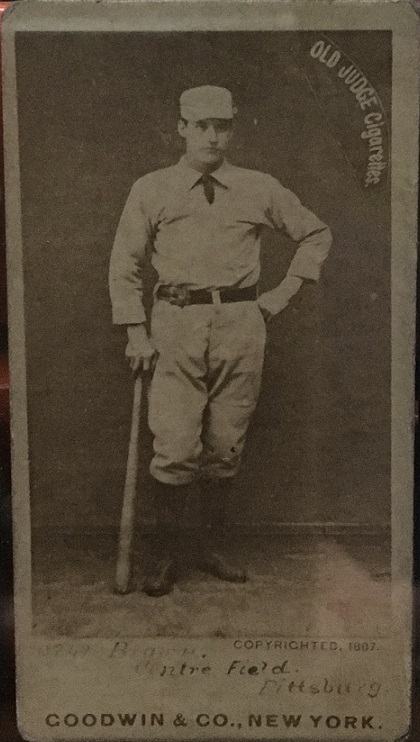 The Story of Tom Brown

As a youth, Thomas Tarlton Brown learned his baseball in the sandlots of San Francisco, where he had emigrated from Liverpool, England with his family. As a young man he continued to further hone his baseball craft in Reno, Nevada where he was working as a gold beater. In the early 1880s California started to become a growing source of players for professional teams on the East Coast. Players from the Eastern states who traveled west to play baseball in the winter brought back information about the untapped pool of talent there. In the winter of 1881, John Montgomery Ward, by then already a four-year pro with the Providence Grays, was doing just that when he discovered Brown. Brown played in several California exhibition games with the Grays after which he, too, headed east with the hope of sticking with the Grays for the 1882 season.

Tom’s hopes were dashed when he was cut from the Grays prior to the start of the season. Rather than head back to California, he stayed in the East to play semi-pro ball while hoping for an offer from another team. That turned out to be a smart move as he was signed in July about 30 games into the 1882 season by the Baltimore Orioles of the American Association. Over the 45 games he played for them, he was the Orioles best batter, hitting .289. While Baltimore would probably have liked to retain him for the 1883 season as well, Brown instead signed with the expansion Columbus Buckeyes, also of the American Association. For the next two seasons, Tom was a consistently solid batter – hitting in the mid-.270s – and leading the team in hits both years.

Despite having almost won the American Association championship in just their second season of existence, the Buckeyes folded after the 1884 campaign. Tom Brown was not wanting for a job long, though. When Columbus declared bankruptcy, the Pittsburgh Alleghenys absorbed them and took control of all their players. The influx of new talent was a shot in the arm for the Alleghenys, but not enough to cause a quantum leap. They still wound up in third place in the American Association in 1885 with just 56 wins against 55 losses. Tom Brown, however, had a stellar year. He was the team’s leading hitter with a .307 average and was in the Association’s top ten in hits, runs, slugging average, on-base percentage, total bases, and home runs. Pittsburgh improved measurably in 1886 with the addition of Pud Galvin as their number-one pitcher, but still could manage only second place in the Association’s standings. Brown was not as good statistically as he was the previous year, but still very respectable with a .285 average and top-ten rankings in on-base percentage and runs with 105.

The November 3, 1886 issue of The Sporting Life reported that before he had headed back to California for the winter, Tom Brown had already signed his $1,600 contract for the 1887 season. There were no outward signs of problems between he and management at that point. And the 1887 season started off normally, with the exception that the Alleghenys has switched leagues – from the American Association to the National League. Yet, there must have been some negative undercurrent and Pittsburgh’s mounting losses just exacerbated it. There was, of course, the usual clubhouse grumbling and the August 17 issue of The Sporting Life reported that Tom and Ed Beecher had been “…laid off for weak batting…” Actually, Brown had been released by Pittsburgh on August 15. The following week’s The Sporting Life issue reported that the Indianapolis Hoosiers has acquired his services. The new article further stated that Tom “…was greatly hampered…by the constant abuse of the (Pittsburgh) papers, it being charged that he was the leader of the California clique. He wanted to get away from there and with a change of location…he may be a valuable man…” That is not, however, how it worked out. In his 36 games with Indianapolis, he batted a meager .179 and was not retained by the team when the season ended.

He spent his next four years in Boston – two with an NL entry, one with a Players’ League entry, and one with an AA entry. During that time, despite having just a .276 batting average, he scored 481 runs and collected 295 stolen bases. On the 1891 AA pennant-winning Boston Reds team, he had his best season as a pro, leading the AA in runs, hits, triples, total bases and stolen bases, and finishing second in doubles, third in batting average, and fourth in slugging percentage. His 177 runs scored that season was a Major League record at the time and it has been surpassed just once since. Sadly for him, the American Association ceased to exist after that season and four of the AA teams moved to the expanded 12-team National League. While many of the teams were interested in Brown’s services, he was assigned to Louisville. That began a seven-year period for him where the team on which he played finished no higher than ninth place. The rest of Tom Brown’s career was marked by a combination of mediocrity and brilliance.

Tom Brown accumulated several major league distinctions over his career – some wonderful; some dubious. Among all players who have collected fewer than 2,000 hits in their major league service, he ranks first in runs scored with 1,521. He also topped all 19th century outfielders in assists and double plays. His double play total still ranks 4th all-time. His speed was legendary. The December 6, 1886 issue of The Sporting Life reported from California that “…Hub Collins…and Tom Brown…are the fastest base-runners ever seen here…” Brown has 658 stolen bases to his credit, ranking him 13th in Major League history. He would be ranked higher, but stolen bases were not tracked for the first five years of his career. In 1887 he became part of the first known example of a platoon outfielder arrangement when the Indianapolis Hoosiers used right-handed hitting Gid Gardner against left-handed pitchers and left-handed hitting Tom against right-handers. On the other side of the ledger, he also ranks first among 19th century players in career strikeouts with 708. His career batting average is only .265 and in back-to-back seasons (1892 and 1893) he posted two of the worst three averages (.227 and .240) in the National League among outfielders with a minimum of 500 at bats. He also holds the record for career errors by an outfielder with 492, which will never be broken because outfielders wear gloves now.

During the 1897 season Brown was appointed the NL’s Washington Senators player-manager, a position he held until he left the team the following year. On July 4 of 1897, he was also temporarily appointed an NL umpire, making him one of only a handful of people to play, manage, and umpire in the major leagues in the same season. He umpired in the 1901 and 1902 seasons as well, but then retired the sport completely to manage the cigar store he owned in Washington, DC. He died of emphysema at the age of 67 in 1927. He is buried in the Fort Lincoln Cemetery in Brentwood, Maryland.