I can imagine that today’s Card of the Day was probably pretty popular when it first came out, but the value decreased for some time before possibly seeing a bit of a small rebound years later. The Pittsburgh Pirates made Jeff King the first overall draft pick in 1986, taking him out of the University of Arkansas. He played just 37 games in the low minors during that 1986 season, then hit 28 homers and drove in 96 runs over two levels during his first full season of pro ball. Numbers like that would get the attention of people who collected rookie cards in 1988 when Fleer came out with a two-player prospects card featuring Jeff King and Randell Byers, who was drafted three times in the first round by three teams before he finally signed with the San Diego Padres in January of 1984. On Jeff King’s 57th birthday, here’s a look at their shared rookie card from the 1988 Fleer set, #653 in the 660-card set. 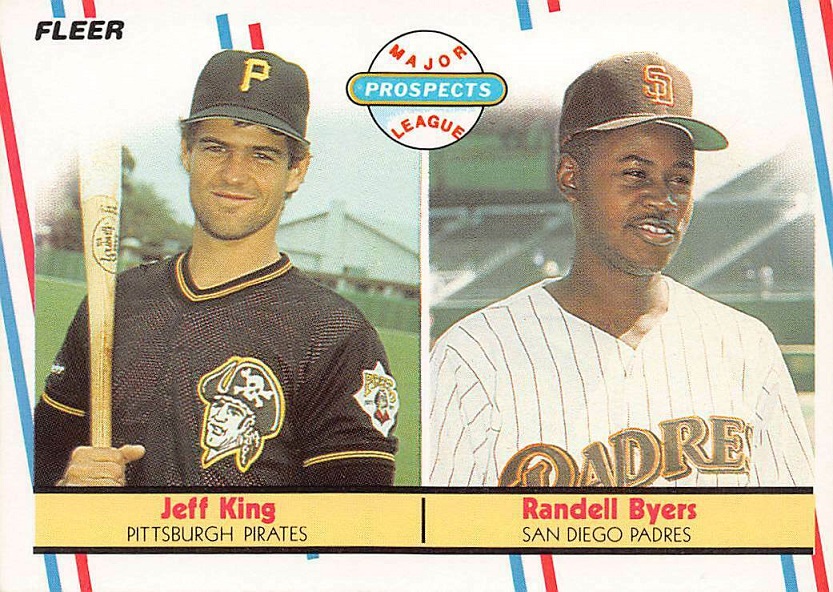 I’m a big fan of everything that Jeff King has going on in that 1987 Spring Training photo. You know the year by the patch on the left sleeve, which was used to mark 100 years in the National League, though I believe that they were celebrating 100 years of being a franchise, which was incorrect obviously. The franchise has two starting points that you can believe, but I’m leaning towards the later more often now. They either started in 1882 in the American Association OR they started in 1891. They did not start in 1887, there’s no good explanation for thinking that is true. The later date comes from the fact that the 1890 team actually dropped from the NL, then was replaced by a brand new consolidated club made up of a few parts of the 1890 team and a lot of the 1890 Pittsburgh Player’s League team. Despite the error on the patch, it’s still great looking addition to the jersey. Then there’s the logo on the front of the jersey. If you don’t like that logo, then you might be in the wrong place. Then you have the black & gold cap to literally top things off. Those are three nice looks, along with the black jersey.

You may have noticed an error on this card, or you thought that I made an error. The Randell spelling on the card is correct. His name is listed as Randall on Baseball-Reference and some cards from his playing days say Randall as well, but unlike 99% of current players, you can read his autographs, and there is clearly an E in his first name. There is no extra value attached to the misspelled cards. 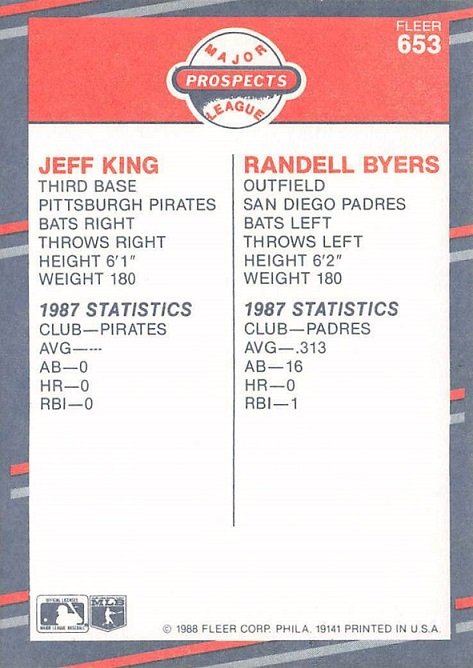 As you can see, the back has a different layout from the front, which is a horizontal layout. The back is the same vertical look as every other card in the set. There isn’t much to go on here to help you if you didn’t know who these players were at the time. There’s nothing about their draft status and Fleer didn’t even give a hint with their ages. All you know is that King didn’t play in the majors in 1987 and Byers barely did, collecting five hits and an RBI in 16 at-bats.

Here’s the interesting thing about these two players being on the same card. Byers played his final big league game in May of 1988. King debuted in the majors in June of 1989. There was an entire year between the end of one big league career and the beginning of the next, and the two were basically the same age, both born late in 1964. King did not debut well either, hitting .195 in 75 games in 1989. Whatever interest there was in two first round picks on the same card back when it came out, was basically gone by the end of the 1989 season.

If there was a slight rebound with the card, it may have been when King drove in 98 runs during the 1993 season. Possibly when he had a solid season in 1995, followed by back-to-back 111/112 RBI seasons in 1996-97, then 24 homers and 93 RBIs in 1998. It was a pretty nice run with the strike-shortened 1994 season interrupting the streak of success. However, he retired after playing 21 games in 1999, citing injuries and his heart not being in the game anymore. That was quite a drop-off after averaging 100 RBIs per season during the five full seasons from 1993-98, and 1995 was shortened by 18 games due to the strike from 1994 carrying over.

Byers was out of baseball altogether by the end of the 1989 season, which he spent in Triple-A. He played 21 Major League games and went 7-for-26 at the plate. In Spring Training of 1990, he had to have a hernia surgery, and he was released while he was in recovery. He then hurt his arm, which ended his career.

If you’re interested in this card, there are a few auctions that stand out, but for the most part, you can add it for around $2-$3 delivered on Ebay. The best one to me is a lot of 25 that is selling for $5 delivered. You can’t beat that deal. There’s a card signed by both of them going for $31. There’s one signed by King for $16, which I personally don’t recommend, but it might suit your needs. He signed in dark blue over the black jersey and got writing on both logos. Then there are three unopened cello packs where this card is on the front/back, visible in the packs. Those are all around $8 each.