The 1889 Pittsburgh Alleghenys had an interesting pitcher who played one game for the team. Alexander Jones made his big league debut on September 25, 1889 and struck out ten batters in a complete game win. He would go on to pitch just over 200 innings in the majors, spread out over four seasons. He was born on Christmas Day in 1869, which is why I bring his name up today. Jones had his chance for his moment in the sun, then a few years later, he got a second chance in the majors. John Hess is closely related to him in Pittsburgh Pirates franchise history, but he never got his big league chance. This is the story of his brief time in Pittsburgh.

Jones and Hess were playing for a local amateur team in Pittsburgh called the Homesteads. Jones was making a name for himself as quite a pitching prospect. These teams wouldn’t be your typical amateur teams now. There weren’t many minor league teams back then, and baseball was an extremely popular sport at the time, so many players were on semi-pro/amateur teams and they would work locally and then play baseball for one of the many local teams in the area. Hess was his catcher, and it was said at the time that Jones was so good at pitching that Hess was the only catcher on the team who could handle his pitches. You have to remember that at this time the equipment for catchers was inferior to anything you’ve ever seen being used (regardless of your age), and defense behind the plate was a valuable asset. If you played great defense, you could bat .150 back then and still have a job. Catchers took a beating back then, much worse than any catchers now. However, Hess was also one of the leading hitters among local players.

Hess was extremely valuable to the Homesteads because it allowed Jones to be at his best. On August 10th, Jones struck out 16 batters against another strong local team called Braddock, and Hess was behind the plate, also putting together a strong game. It was Jones who got the attention of the Pittsburgh Alleghenys a month later, but there was a common practice back then for new pitchers brought along for a tryout. Teams would often bring in the personal catcher of a new pitcher if he had one. So when the Alleghenys announced that Jones signed on September 17th, it was also mentioned that John Hess was signed as well.

Jones was actually first announced as signing on September 12th, after he pitched great for the Homesteads just a few days earlier. He struck out 15 batters against McKeesport in a 10-inning tie on September 8th. However, he was probably just brought along on a trial first and then officially signed five days later. On September 16th, the Alleghenys had their game rained out, but the players were able to gather around on the field and watch closely as Jones pitched to Hess in what was described as a long trial. Jones showed off some impressive curves and strong control, while Hess did an excellent job behind the plate.

On September 23rd, a quote from Hall of Fame manager Ned Hanlon in the Pittsburg Dispatch (yes, there was no H at the end in the 1889 title of the paper) said that he was going to get Al Maul some pitching time, but he wasn’t sure if they would have time to see what Jones and Hess could do in a game. On September 24th, the local writers were told that Jones would make his pro debut on September 25th against the last place Washington Nationals. The actual quote from the September 25th edition of the Pittsburgh Post said “Jones and Hess, the battery from Homestead, will be given a trial this afternoon by the home team.” That was twice in two days that they were mentioned together as a pair, while talking about their potential debut.

Jones made that debut on the 25th and impressed, but his catcher that day was Fred Carroll, one of three regular catchers for the team that season. No explanation was given as to why they didn’t keep the battery of Jones and Hess together that day, but it ended up costing the latter his only true shot at the majors that year. Jones didn’t start any of the final nine games, despite the impressive debut. Even if he did, it was unlikely that Hess would have caught him because Carroll did an excellent job of receiving the new pitcher according to the game recaps.

Here’s where the story gets more interesting. There are plenty of players who spent three weeks or so with the Alleghenys/Pirates and never played over the years, but Hess actually did catch for the team. After the season ended on October 5th, the Alleghenys had a postseason series of exhibition games. There was also an announcement that Hess, Jones and a pitcher named John O’Brien had signed contracts with the Alleghenys. That’s important to note because not all players on tryouts actually signed contracts. Only Jones actually got into a game from that group.

On October 9th, the Alleghenys played a team called the Athletics, who were called an amateur team, but they had numerous players with previous/future Major League experience, so it was basically like taking on a Triple-A team. Doggie Miller was the starting catcher for Pittsburgh, but he had to leave after the second inning when he was struck on the hand by a foul ball. Hess played his first game for the Alleghenys that day, catching the final five innings of the 17-7 victory. He had two hits and scored two runs, but he had some trouble behind the plate catching Al Maul, which led to three errors.

On October 14th, Pittsburgh took on Braddock and Hess was the starting catcher with Maul on the mound. This game was said to have been played in the bitter cold with no more than 20 fans in the stands. For that reason, it was called just after the seventh inning started. Hess picked up another hit and another run.

Three days later, the Alleghenys took on the Homesteads and manager Hanlon allowed Jones and Hess to play against Pittsburgh for their old team. It did not go well for Jones, who allowed 15 runs to the big league players, who took seven turns at the plate before the game was called early. Hess caught well and had a hit and an RBI off of Maul.

On October 19th, a story in the Pittsburgh Post said that Hess would not likely be with the team much longer. He was reportedly the leading hitter in the county league for the Homesteads, but his bat and strong throwing arm weren’t enough to keep him around as a big league catcher just yet. The issue as quoted in the paper was that he had “a disposition to fight the ball”, which was then explained as a catcher “shoving out their hands to meet the ball”.  The story about his potential release proved to be true, as he did not catch for the team again. On December 19, 1889, Hess and Jones signed contracts with Bradford of the New York-Penn League for the 1890 season, which paid them each $150 per month.

Hess ended up playing eight seasons of minor league ball. You can find his career stats under “Jack Hess” on Baseball-Reference, which shows that he was quite a hitter, but he became more of a utility player during his career. He played with Jones during the 1890-91 seasons, then the pair split apart briefly.

John Hess was a member of the Alleghenys for about five weeks total, including the postseason exhibition tour. He should have caught for them on September 25th, when it was announced that he would catch that day. It was a common practice to keep young pitchers/catchers together, but the fact that they were brought to the team together made it even more likely that they would both debut together. As it was, Hess ended up catching twice for Pittsburgh, putting in a total of 11 innings behind the plate. The problem was that he debuted four days too late to get his name in the record books.

Through extensive searching, I was able to find this image of him from 1896: 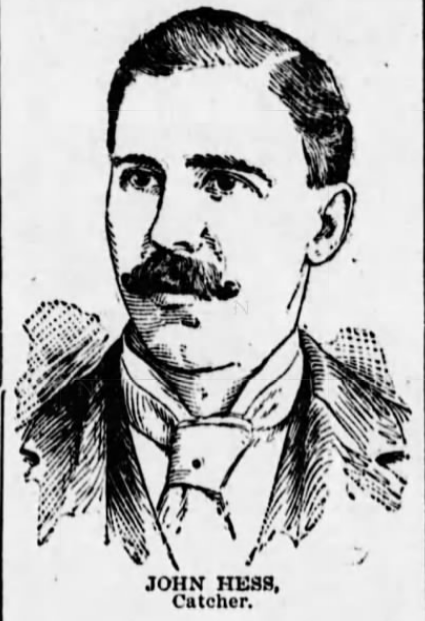 This story actually got a bit worse for Hess as I did more digging. I was only concerned with his time in Pittsburgh, but as I was searching for a possible photo, I came across a note from January 13, 1892 that he signed with the Louisville Colonels of the National League. That’s the same team that Alexander Jones returned to the majors with for his second stint. It appears that they wanted to keep the battery together. Even in early March of that year, there were notes that Jones and Hess would be a battery for Louisville. They reported to Spring Training on March 23rd (season started April 12th) and they went right to work that day.

Hess made the Opening Day roster, but eight days later he was released on ten days notice without playing a game. Ten days notice was a common practice back then, where teams had to pay players for ten days, but no team could sign them during that time. Occasionally, the player was needed by the team that released them during that time-frame and they returned. Here’s the worst part, because it was something that happened again. Hess was working with Jones all of the time, but when Jones started on April 19th, John Grim did the catching. Hess received his release the next day.