When you pitch often for a very bad team, you better be pretty good if you want to avoid a dubious win-loss record. The last National League pitcher to lose 20 games in a season was Phil Niekro, so even a Hall of Famer couldn’t avoid a bit of history by being a workhorse on a bad 1979 Atlanta Braves team. During the 1985 season, the Pirates were awful, to put it bluntly. They finished with a 57-104 record, despite having a decent array of names. You wouldn’t think that a club with Tony Pena, Jason Thompson, Johnny Ray, Bill Madlock, Rick Reuschel, Rick Rhoden, Don Robinson, Larry McWilliams and Bob Walk would be that bad, but it happened.

Jose DeLeon was a 24-year-old starter for that team, and his 4.70 ERA was well above the team and league average for that season. He debuted in the majors after the 1983 All-Star break, so he was still somewhat new to the majors. Not a rookie, but far from being called a veteran. He lost his first start that season, then pitched one of the better games in Pirates history, allowing one run over eight innings while striking out 14 batters. He got a no-decision, which should have been an immediate indication that it would be a rough season. He allowed five runs in each of his next two games, but it didn’t matter because the Pirates didn’t score in either game. By the end of May, he had an 0-7 record, though his 5.55 record didn’t help his case. He won his first start in June, then took a loss by allowing one run in six innings. That was followed by his second win. Or should I say, his last win of the season. DeLeon lost two more games in June, then lost all four starts in July.

Two things happened in 1985 for DeLeon to avoid 20 losses. He was sent to the minors for a month, then started pitching in relief with 18 losses to his credit and 22 games left in the season. When he lost his 19th game, he was done pitching for the season. He didn’t exactly pitch in bad luck. In 15 of his 19 losses, he allowed 4+ runs. In one of the other losses, he gave up three runs in 1.1 innings. That 19-loss season ended up on the back of his 1986 Topps card, a set that we have featured here just once before today. 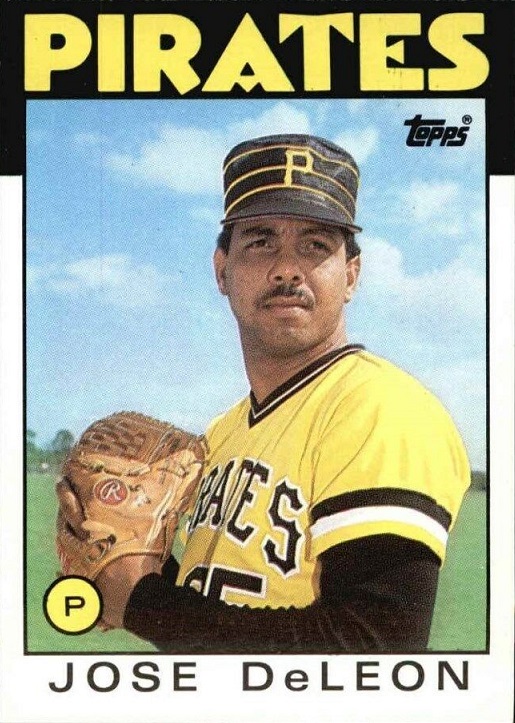 I went into detail about his 1985 season partly because this photo was taken in Spring Training that year before everything went wrong. He sure looks hopeful for the season in that picture, doesn’t he? I’m such a big fan of those uniforms, but they especially look good when Topps complements them with the team colors on the card, using it twice here, though they used black for the top border and for the position/circle in the bottom left for every team. It was adding the Pirates yellow/gold for the letters up top and the background of the position that really made everything here. The border design is really two different stories here, with the bottom 3/4 being rather boring (especially the writing), but the black at the top and different writing/coloring makes the entire card look better. 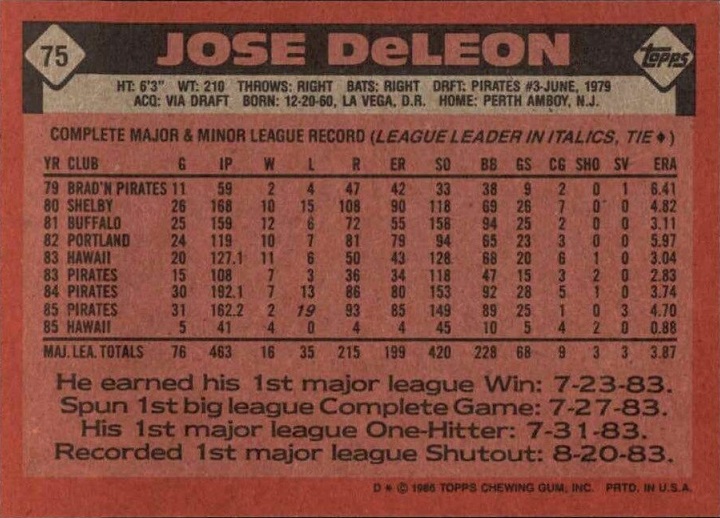 Topps was nice enough to include all of his stats in pro ball, as well as some fun milestones from his first big league season. Nice touch ignoring that 19-loss season, while also putting Hawaii at the bottom in the stats so it looks like he finished strong. DeLeon is a rare player who was born in the Dominican, but went through the big league draft. Just an interesting side note I figured I’d throw in there.

I assume you would want this card by now, so I’m here to tell you about pricing. Not surprisingly, a card of a guy who loses 19 games in a season can be found in the common bin. DeLeon had a nice career in the majors, putting in 13 seasons and nearly 1,900 innings, so he should be remembered more for that than his 19 losses in 1985, or the fact he lost 19 games five years later. Actually, he is remembered in another back-handed way, as the guy that Pirates gave up to get Bobby Bonilla from the Chicago White Sox, which turned out to be a great deal.

You have plenty of options in the $2-$3 delivered range. From there, we have an autographed version for $21, and another for $3.95, which comes with a certificate of authenticity.  Then there’s a PSA 8 for $9. It would cost more to get one graded/shipped, so that works well if you want a graded copy. However, for $44 you can get a PSA 10.