I’m trying something a little different today with the scan of the card. I had better options as far as condition of the card, but I wanted to show a collector grade card, the one that fits better in most vintage card collections. If you collect old cards in high grade, you have two options. The first is to be rich, and then it doesn’t matter about the cost. The second option is have a smaller collection. There are also collectors who go for quantity on a budget and collect cards that are “filler grade”, which can also mean that someone uses that card to fill a hole in a collection until something better comes along. The middle ground is the collectors grade, where most of the old cards fall into because it’s hard for a piece of cardboard to stay in nice condition for over 100 years.

I usually go for higher grade card scans here because the article is about the card, so why not see a nice example. However, most of those nice old cards are out of the budgets of most collectors. I want to feature a T205 card that everyone can afford, so you see what you can get on a budget. Today’s Pittsburgh Pirates Card of the Day features one of the best pitchers in team history, Sam Leever. He went 194-100 with the Pirates in 13 seasons, which was his entire big league career. This is just our second card from the T205 set, so we are overdue to feature another, especially considering that it’s a very popular set among vintage collectors. 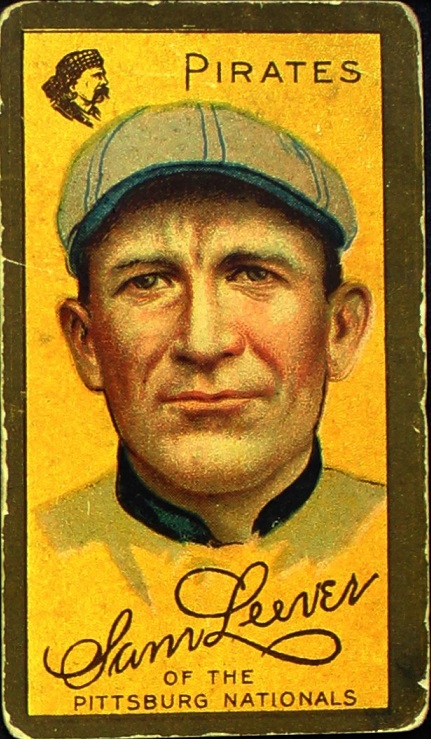 In the collecting world, someone would say that this card has been well loved, which just means that it was handled a bit during its time. The T205 set is not one of my favorites from back then because I’m not big on portrait cards, and these cards have big portraits. It’s far from my least favorite set, and I do like some things about it, including the gold border look (you will hear this set sometimes called “gold borders”). I love that Pirates logo in the top left, and the actual use of the team name Pirates on the card. That didn’t happen often back then. Most just say Pittsburgh/Pittsburg, depending on what spelling they preferred. Pittsburg was correct at the time, but not widely accepted by everyone. I also like the player’s name “signed” at the bottom.

I have collected older cards since I was smart enough to ask for them for birthday/Christmas presents as a kid. That being said, I don’t have a ton of cards from this set. I prefer the small subset of minor league cards from this set because they are the only ones that have player poses instead of portraits. Truth be told, I’m thinking about buying the one I recommended in the pricing section below, so if it’s not there when you check, I offer no apologies. 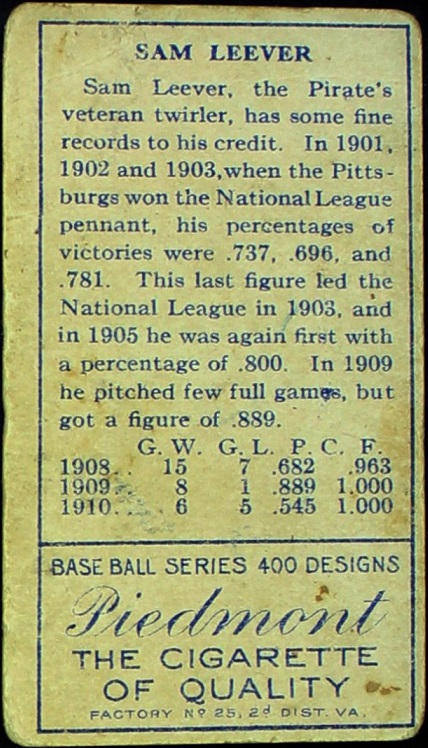 The back here has an ad for Piedmont cigarettes, “the cigarette of quality”.  There are different brands throughout the set and some affect the value of the card. The stat choices on the back here are very interesting, giving you a look at the baseball world from 1911. They chose games won, games lost, winning percentage and fielding percentage. Those would not be the four choices for a pitcher now on any card, unless they were borrow the T205 design. Of course, back when Leever pitched, pitchers weren’t pampered, so the win-loss record meant a lot more because they usually finished what they started. Leever completed 241 of 299 starts. An interesting note in the bio there is that he led the league in winning percentage in 1901 as well, even though they mention the other times that he led the league in that category. It may be due to the fact that he didn’t reach 20 decisions (he went 14-5).

If you’re interested in getting this card, you currently have seven options on Ebay and three of them are going for under $100. Of note among the others is an SGC 5 (known as Excellent condition) and that is $179 delivered. Then there’s an SGC 3, which is $150. The card I used for the scan is the lowest condition example and it is $88 delivered. However, two slightly nicer ones that are ungraded are both cheaper, and basically the same price. One is $71 and the other is $73, though that auction has a best offer option. That best offer option would be my choice among the seven because it’s a nice looking card that you can get graded yourself.