Jacob Stallings was just traded away by the Pittsburgh Pirates, but today is his birthday, so we can bring him back for a Card of the Day feature. This is his first appearance in this series, so we have all of his cards to choose from, but I went with a favorite set, though this is the first 2021 card we have used from that set. The 2021 Topps Heritage set uses the same front/back design as the 1972 Topps set. If you’re unfamiliar with the 1972 Topps set, close your eyes and picture a typical 1970’s look and you’ll immediately come up with the 1975 Topps set. Now tone it down a little and you have the 1972 set. If you had no idea about the players on the cards, you would more than likely guess right away that it was made in the 70s.

The 1972 set design is not one of my favorites from the decade. I like the 1970 and 1971 sets the best, followed by the 1974 and 1976 sets in the second tier. The 1972 set would battle for the fifth spot, but whenever the Heritage sets come out each year, I almost always like the look of them more than the original. It’s probably the quality of the cards themselves, the nostalgic look, and the much better photos, but they all look good to me. With that in mind, let’s get into today’s featured card, #352 from the 2021 Topps Heritage set, Pittsburgh Pirates catcher Jacob Stallings.

Tell me I’m wrong about the card design doing a great job of representing the 1970’s. The 1972 Topps set didn’t include team logos, but the photographer did a nice job of getting that Pirates patch on the sleeve, right in the middle of the card. I like that logo much better than the “P”, which is the logo that gets featured on current cards. It appears that Stallings is wearing the armed forces hat, which I didn’t know that they wore during Spring Training (unless I’m wrong about the design being camouflage). It’s a little bit hidden, but notice the Topps Heritage logo in the bottom right of the photo. 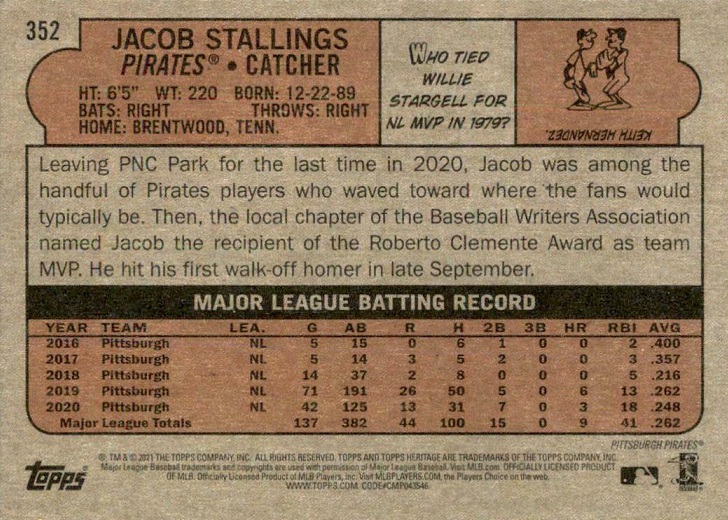 This back replicates the 1972 Topps back as far as color and setup. They only included big league stats for Stallings, allowing them to include a nice little bio. One of my favorite parts of the back is the return of generic gray Topps man, which looks like no player ever, and it has a great example of that here, where Keith Hernandez and Willie Stargell look like twins on the card…well, except for the nose on one of them, not sure who it was meant for, but generic gray Topps man strikes again. Maybe it’s just me, but I figured a 1972 tribute card shouldn’t have any trivia questions that happened after 1971. I know it’s a 2021 card, but I would have done it the other way.

If you’re interested in this card, you’ll be happy to know it’s both cheap and plentiful on the Ebays, and you have some other options as well. There are over 100 active auctions for this card and almost every single one is under $3 delivered. One person is selling ten in one lot and you can get it for just over $5 delivered. There’s a red border version that is exclusive to cards sold at Target, and that one is $7.75. There’s also a rare black parallel and that one is $12.50 (with a best offer option). There’s a bigger 5×7 size card that is numbered to 49 copies and that is $5 delivered. Then the most expensive option is a rare french text parallel, which is basically like an O-Pee-Chee card. That is going for $30, with a best offer option. Whatever you choose, happy collecting!