Today’s Card of the Day is a very interesting one because I don’t remember collecting the set and I was surprised at the number of options for this particular card. It comes from the 2008 Upper Deck Heroes set, which had 200 cards in the set, but with all of the variations of those 200 cards, the actual numbers is well over 1,000 cards. I went with Freddy Sanchez today because it is his 44th birthday. Surprisingly to me, this is also the first time that he has been part of this feature.

The good thing about a first-time feature is that I have all of their Pittsburgh Pirates cards to choose from. I actually wanted to use another card, but I couldn’t find decent front/back scans, so this particular base card was my second choice, though I was looking for a better scan of a different variation before seeing (and settling) on this card below. I shortened the title a bit, but this card today is the light blue jersey variation. I’ll get into all of the choices in the pricing section, but for now, let’s look at our first card of Freddy Sanchez. 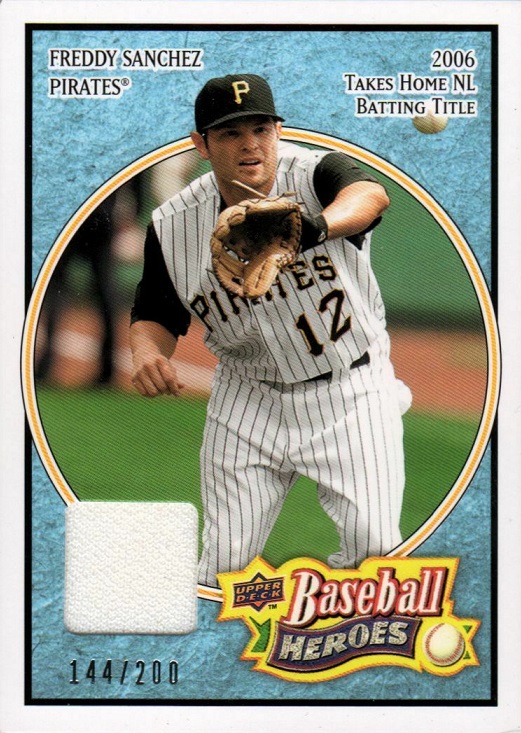 That little patch in the bottom left corner is a piece of a game used jersey from Sanchez. Below it, you can see that the scan I used is card #144 out of 200 examples of this particular card, which makes it one of the tougher cards to find in the set, but not the toughest. The Heroes set gives you the reason for the player being included in the set in the top right of each card. Sanchez won the 2006 National League batting crown, so he was one of the 200 players selected for the set. Many of the other accomplishments were much more pedestrian, with one of the examples I saw being a pitcher who threw a shutout. I should note the word “baseball” in the bottom right corner. Normally that would be obvious, but Upper Deck that year had Heroes sets for all four major sports, and each one had the sport name there. 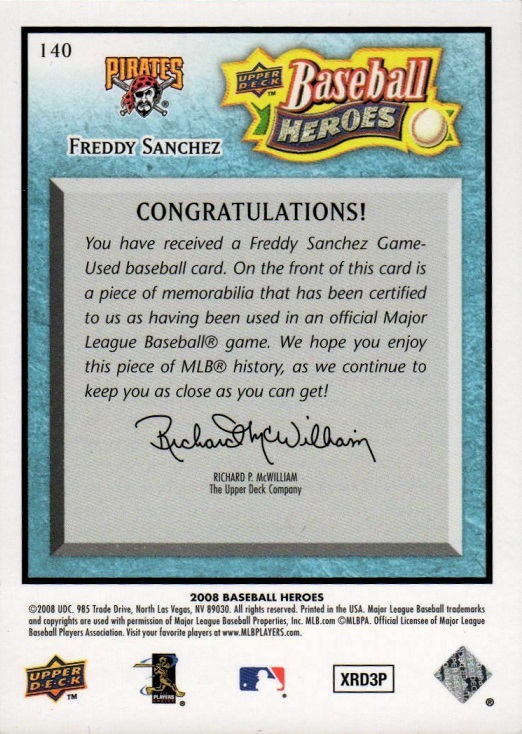 The back of this card lets you know that there’s a guarantee that it is a piece of game used memorabilia on the front of the card. Nothing about Freddy Sanchez here except his name, but the back does have the Pirates logo, so that’s always a plus.

I mentioned I would go into more detail about the options in the pricing section, so here we go. This is called a light blue variation, because the color on the front (and back) is light blue. There are two of these cards on Ebay right now. One is $16 delivered, which is the second most expensive variation of this card on Ebay, and the other (which is the scan above), is just over $8 delivered.  The most expensive card right now on Ebay is the purple parallel card, which has just 25 examples. The seller wants $45 for that, though there’s a best offer option. The price then drops down to $8.50 for the third most expensive, which is a navy blue variation that is numbered to 199 copies.

There’s a black version, which is the second easiest one to find behind the base card. At this point I should mention that the photo section of each card is the same, the difference is just the area color around the photo and whether or note the card has a jersey piece. The black version sells for as little as $2 delivered, but some are priced up to $7 (there’s no difference, go cheaper if the seller is trustworthy). The base card is somewhat easy to find and it’s your typical $2-$3 card.

These aren’t all of the possibilities, but the other ones aren’t available on Ebay right now. They include a beige version (299 copies), a brown version (149 copies) and a sea green version (99 copies). There’s also a light blue without the jersey that is very rare (49 copies). You can also find the jersey version in all of the colors, so basically if you wanted to collect all of the variations of this card, you would be busy for quite some time tracking them down. Happy collecting!