Sometimes I write articles that are for myself as much as anyone else. This is one of those cases. Back in 1923, the Pittsburgh Pirates were hot on the trail of a 20-year-old pitcher for Holy Cross, who was setting the college ranks on fire. That pitcher was Owen “Ownie” Carroll, and he was born in Kearny, NJ, birthplace of Pirates star infielder Dots Miller, as well as a large number of my family members, myself included. The Pirates made an impressive offer to try to sign Carroll while he was in his second season at Holy Cross, but they apparently never had a chance.

On May 18, 1923, the Passaic Daily News ran a story titled “Ownie Carroll Rejects Offer of Pittsburgh”. The story goes on to say that the Pirates offered him $10,000 a year, but he planned to continue his studies for the priesthood and had no plans of playing professional baseball. For someone supposedly going into the priesthood, he was a good liar, though there was some necessity to that as you will see below. The local Pittsburgh papers noted that scout James Johnstone was after Carroll for some time and had earlier made a smaller offer to sign him, but the Pirates increased their offer in mid-May. It was also noted that the offer was a three-year contract. 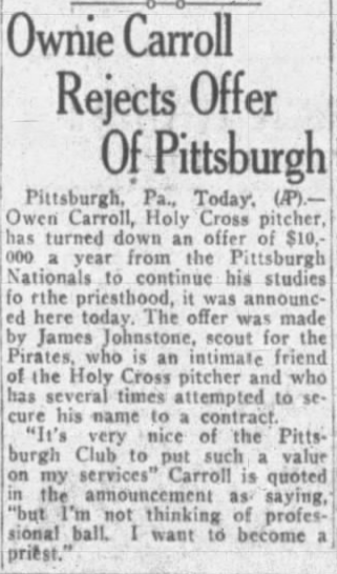 Three weeks later on June 9th, a story ran in The Bridgeport Telegram which stated that the Pirates sent scout Chick Fraser to watch Carroll pitch and he declared that it was a waste of time to negotiate with Carroll because he believes that he already entered an agreement with the Detroit Tigers. The story gets more interesting when it was noted that a reserve list released in February had the name “Carroll” listed for the Tigers. When asked about it at the time, they said that it was another pitcher named Carroll, and not the Holy Cross student.

It doesn’t seem hard to believe that Carroll would have agreed to a deal with the Tigers because he pitched an exhibition game against them on July 16, 1922 and won 9-2, allowing just three hits in a complete game against a lineup that included Hall of Famers Ty Cobb and Harry Heilmann on a team that batted .306 on the season. Cobb said that Carroll was ready to step into the majors that day and pitch. It’s not a stretch to see why they would have been eager to sign him, but he wouldn’t have been able to play college ball if he had a pro contract, so it had to be hidden from everyone until he graduated.

The only problem was that Carroll didn’t actually play his first game with the Tigers until June 20, 1925. He was at Holy Cross again for the 1924 season and he went undefeated. Then in 1925 he dominated the competition again, winning his 48th college game late in the season, while also finishing off an impressive performance by never losing a home game during his college career. It was said that he was undefeated in three of his four seasons and one of his two career losses was a 1-0 game. As soon as the final game ended in June of 1925, he finally reported to the Tigers, 28 months after they first put him on the reserve list.

Just three weeks before his big league debut, the Pittsburgh Press ran a photo of Carroll and called him one of the greatest college pitchers of all-time

The Pirates offer of $10,000 a year obviously doesn’t sound like much now, so for reference, I’ll point out that it’s the same amount that the Pirates were paying Hall of Fame shortstop Rabbit Maranville, who was right in the middle of his 23-year career at the time. The highest paid players for the Pirates at the time were Hall of Fame center fielder Max Carey and catcher Walter Schmidt, who were both getting $12,500. Pie Traynor in his second full season was getting $4,500 that season. You could say that the Pirates were high on Carroll. It was said that when he finally signed, the Tigers gave him a $10,000 bonus, which may have become necessary once the Pirates made their offer.

So what exactly did the Pirates lose out on by not signing Carroll? First off it’s important to mention that he pitched for losing teams almost every season during his nine-year career in the majors. His best win-loss season came in 1927, and the Pirates didn’t really need help that year. He got roughed up in three of his four starts against the New York Yankees that year, so it seems unlikely that he could have helped in the World Series. Carroll finished with a 64-90, 4.43 record in 1,330.2 innings over 153 starts and 95 relief outings.

The Pirates were much better than the teams he played for, so you would imagine that he would probably be closer to a .500 pitcher if he signed in Pittsburgh and stayed around. It should also be noted that his toughest opponent in the National League, where he spent his last 4+ seasons, was the Pirates. He had a 6.00 ERA against them in 63 innings.

Carroll was said to have a good fastball, a fast and slower curve, and a good changeup, with excellent control. He was constantly getting better scouting reports than the stats would suggest, but his 3.7 career WAR in nine seasons suggests that he was just an average pitcher in the majors. If you took out his best and worst seasons, he had 0.3 WAR in seven seasons.

He didn’t exactly live up to the hype, but he also didn’t fail as a big league pitcher. One story later in his career said that he got college batters to chase his pitches, while Major League hitters waited for their pitches. Once he learned how to pitch to big leaguers, he became better.

The final note on Carroll is that he received a lot of comps in his day to George Sisler. That might sound odd if you know that he’s a Hall of Fame first baseman, but Sisler was a star college pitcher at Michigan a little before Carroll’s time. The interesting thing about that comp is that the Pirates held Sisler’s rights at one point. They actually purchased his contract while he was in college, picking him up the same day (and from the same team) that they acquired Wilbur Cooper, who is the franchise all-time leader in wins. Sisler refused to sign with the Pirates and his rights were eventually awarded to the St Louis Browns. Luckily for the Pirates, the pitcher who they ended up with from this trio was one of their best in team history.