It seems like just yesterday that I was writing about Matt Stairs in a Card of the Day article, mentioning that I wanted to use a Topps Total card for him, but I could find a decent back scan to use for the article. Yup, it seems like that was just yesterday. Fast forward to this morning and I’m finally getting to use a Topps Total card in an article. This one depicts relief pitcher Mike Fetters, who spent the end of the 2001 season and the start of the 2002 season with the Pittsburgh Pirates. He was acquired in a trade of July 31, 2001, and he was traded away on July 6, 2002. He is most remembered for his stare towards batters. I was hoping to get that on a Pirates card, but I settled for his 2002 Topps Total card, which allows us to use that set for the first time here. So here’s a look at card #233 from that set, featuring Mike Fetters. 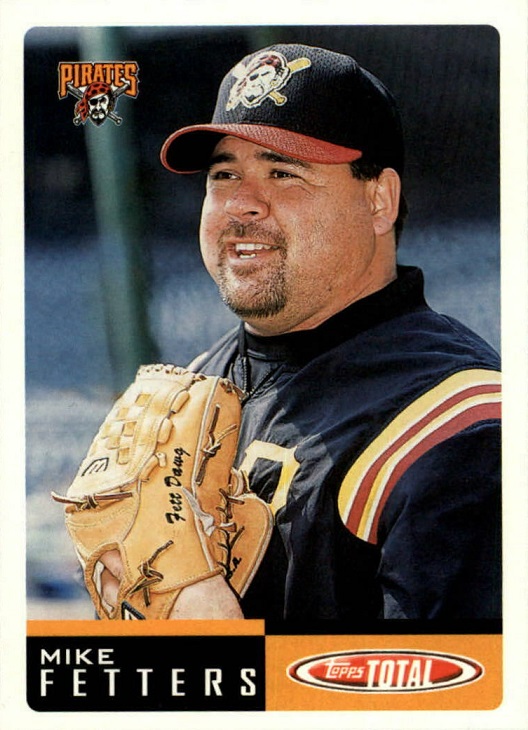 Fetters sure does seem like a jolly man on this card, not the guy on the mound who intimidated hitters with his look. Most people don’t remember him from his earlier days when he was an athletic starting pitcher, tipping the scales at 6’4″, 200 pounds. He pulled a Babe Ruth later is his career (Ruth was trim early in his career if you didn’t know) and was “listed” at 226 pounds by the time he reached the Pirates. Fetters did his job and did it well for a long time in baseball terms, so you can’t knock his career. He also apparently had the nickname Fett Dawg…unless that’s the name of his glove?

If you can remember back to the Stairs article, I mentioned that I liked the hat he was wearing, which is a controversial opinion. Let me say now that this is the hat that I didn’t like, and the only difference between the two is the brim, but it’s a big difference. The 2003 hat for Stairs had a yellow/gold brim, while I was no a fan of the red brim. Also what’s up with the shoulder/sleeve of that jacket? Man the Pirates had some crazy uniform ideas during that time to distract from the on-field play. Extra points to Topps for including the team logo on front. They used the team colors in the design here, though I really wasn’t a fan of that orange-ish color, it just looked good in the logo with the team name. Gave it a bolder look, like sure we lose 100 games, but we still want to mean business!

This Topps Total set was the biggest set that Topps ever produced, with 990 cards. It was released during the middle of the 2002 season, not long before Fetters was traded to the Arizona Diamondbacks, so by the time that most people were getting this card in packs, he was no longer on the team. 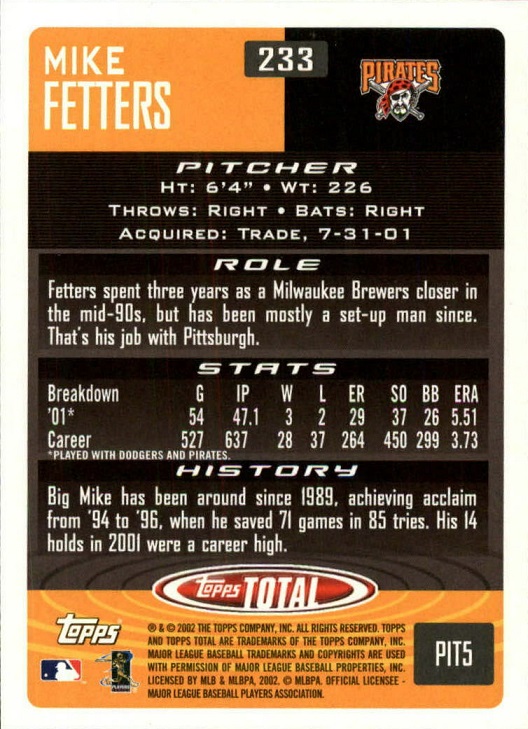 The back has a nice breakdown of his career while not really going into much detail. The role/stats/history sections all have limited space, but you get to know a bit about the player. There’s another Pirates logo on the back, always appreciated. Just like the front of this card, the back uses team colors in the design, which they did for all teams.

If you’re interested in this card, there aren’t many solo auctions on Ebay, but most of them are in the $2-$3 range delivered. There are no auctions of note, so the best I can tell you is just make sure to check the shipping before you complete the purchase. A few of the sellers have the card listed for $0.99, then you click on the shipping and it’s $3.50 or more. There are a few auctions that the total is less than that amount, so you don’t have to stampede to Ebay to get one for a good rate.