During the 20-year losing streak of the Pittsburgh Pirates, they had some close calls that would have shortened the streak, mainly the 1997 and 1999 seasons. However, the 2003 group gave hope that they could break the streak that just reached double digits in 2002. The Pirates had Jason Kendall, Brian Giles and Aramis Ramirez already, and they added Matt Stairs, Reggie Sanders and Kenny Lofton to that group. They also had solid players like Jack Wilson and Craig Wilson in place, plus some potential prospects on the way. We all know what happened during that season, so let’s not make a Card of the Day article sad and instead we focus on one of those added power bats.

Stairs had four straight seasons with 20+ homers for the 1997-2000 Oakland A’s. He then showed some power with the 2001 Chicago Cubs and 2002 Milwaukee Brewers, so the Pirates were his fourth team in four years. He signed with them on December 18, 2002, which was 19 years ago today. He would make it five teams in five years when he left Pittsburgh for the Kansas City Royals in 2004. Before he left though, he hit .292 with 20 doubles and 20 homers in 121 games. His .950 OPS was the second highest mark of his career. Basically, he did the best the Pirates could hope for from him. Stairs didn’t have many cards during his time in Pittsburgh. He signed with the Royals early enough that he ended up with them on plenty of his 2004 cards. I actually tried to use a different card for him, but I couldn’t find a quality scan of the back, so here is our first look at the 2003 Topps set, using card #587, which features Matt Stairs. 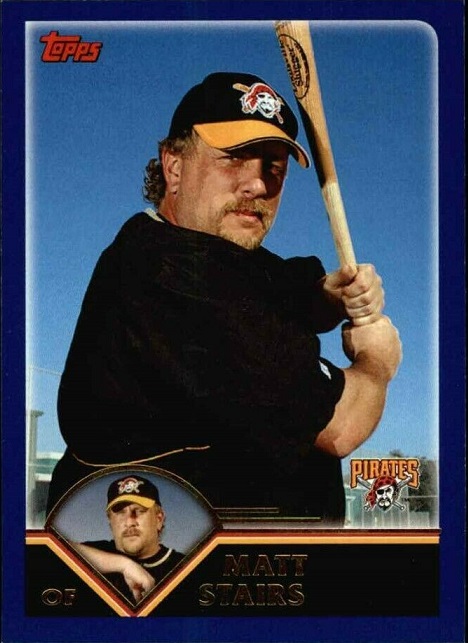 This is a Spring Training photo of Stairs, which was obviously taken in 2003. He looks like a friendly softball player in the main photo, but he’s got a pretty intimidating look in the small photo at the bottom, sort of like he’s daring you to say he looks like a friendly softball player. I know it’s not a popular stance, but I liked those Pirates hats from that year. I like the logo from that time, especially with the team name written out over the top like that, but just the Pirates/crossed bats part of the logo looks great too.

The 2003 Topps design is a decent one. Quality photos, team logos, second pic in a diamond shape, borders that aren’t plain white. It checks a lot of boxes. I’m not a fan of the dark writing on the dark box for the name/position, and the stripes there reminds me of the old (before my time) Vancouver Canucks jerseys. Stairs looks like he could give Tiger Williams a nice run for his money in spirited bout using Queensbury Rules. 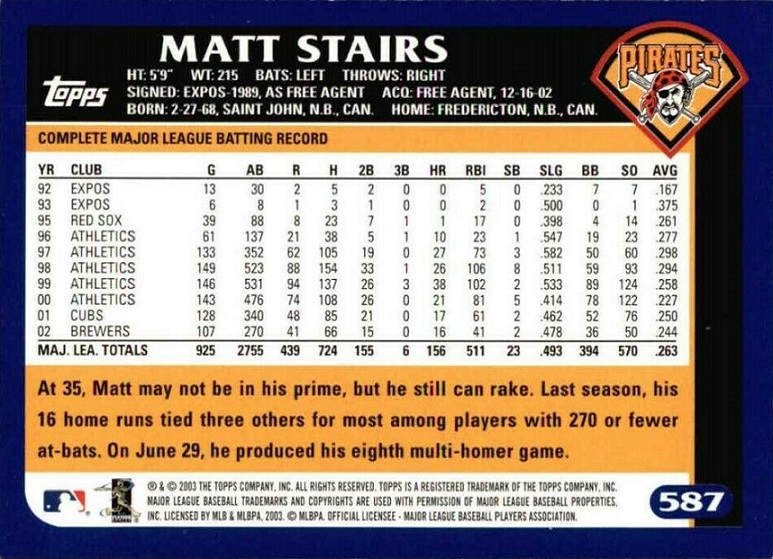 I’m a big fan of the back of these cards, mostly because it fixed my main problem with the front with the hard-to-read writing. They added the team logo on the back as well and I’ll never hate on that being used on both sides. The stat section on a white background is a big plus as well. If the person who designed the back was here right now, I would give them two thumbs up…after I made sure that they weren’t responsible for the front writing (in which case I’d take one thumb back).

This card is a common on the Ebays, but there are a few options, and this same exact pose can be found in the Topps Total set. One of those is quite amusing (not for the seller) and I almost used it here despite not being able to find a good back scan. Stairs signed one Topps Total card in dark ink across his uniform. Only part of the “M” isn’t on the uniform, otherwise the entire name is there and you can barely see anything. As for the normal 2003 Topps, there are three auctions of note. One is a gold version, which were inserts in packs and much harder to find. They were numbered to 2003 copies. One seller has two of them going for $8 and $9 delivered. Even harder to find are the black parallel cards, which are numbered to 52 copies. That’s for sale for $11.99 delivered. The final one of note is a Home Team Advantage card, which were foil stamped and sold only at certain hobby shops. That’s a bargain compared to the others at $5 delivered. As for the regular card, there are a few options in the $2-$3 range.