This is the first time in this series for 1995-96 Pittsburgh Pirates pitcher Steve Parris. He had a brief run with the Pirates, joining them mid-season in 1995 for his Major League debut after a tremendous start to his season in Double-A. He made 15 big league starts that season. He was 27 years old and playing in his fourth organization that year. Parris then pitched for 1996 Pirates for one month, debuting on July 12th and playing his final game for the team on August 11th. He had some nice years with the Cincinnati Reds a bit later in his career, but his time with the Pirates amounted to a 5.82 ERA in 108.1 innings. Today’s Card of the Day comes from 1996 and it was part of the Collector’s Choice set that was put out by Upper Deck. It’s card #267 and it’s a Silver Signature insert card featuring Steve Parris. 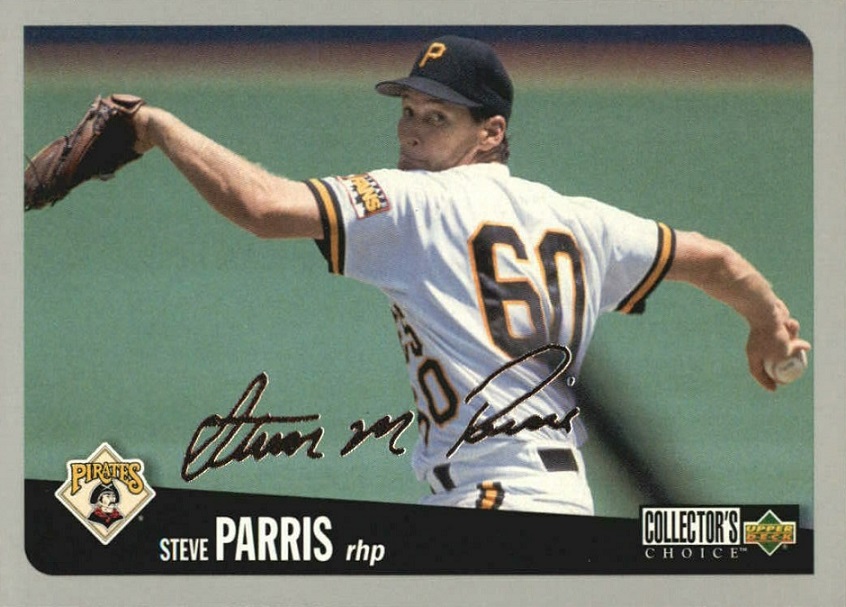 As you can see, the Silver Signature name is self-explanatory. It would help if I had a scan of the base card I guess, but picture this card with white borders and no signature and that’s the regular card. These Silver Signature cards were inserted one per pack, so they are fairly easy to find. They are obviously much harder to find than regular base cards, but there are Gold Signature versions that were inserted one per 36 packs, and they are much more difficult to find than the Silver cards.

I really like the look of the Silver Signature cards in this set, they’re much better than the base cards in my opinion. What helps the eye appeal for this particular card is the horizontal layout of the photo. Most cards in the set had the standard vertical photo. When you do a horizontal photo like this one, you get a better shot of the player in action. It also works great for hitters at the point in their swing when the bat is pointing towards the pitcher. Also, kudos to Upper Deck for including that great Pirates logo on the front. Always adds points for me.

One other thing that has to be mentioned is the 1995 uniform patch. It says “Pirate Fans” over a view of the skyline in Pittsburgh. It was a one-year thing after they returned from the long strike. It looked amateurish, especially compared to the great All-Star game patch from the 1994 season. 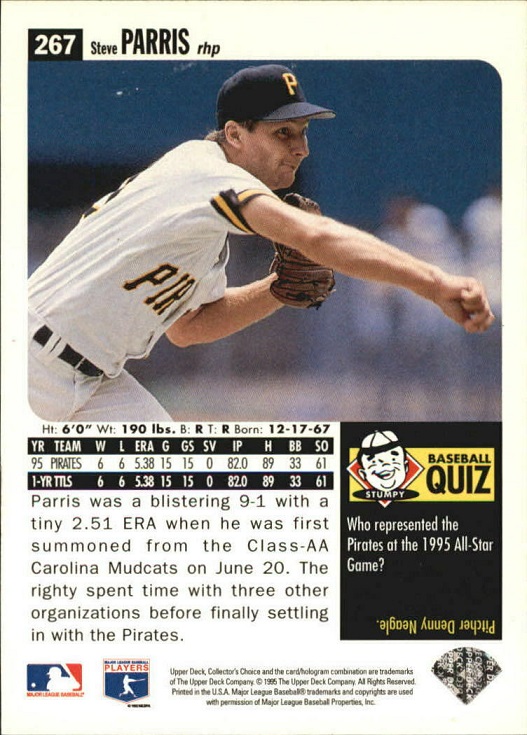 The back of this card adds a second photo for Parris, and it tells the exploits of his minor league days, where his “blistering” run to start the 1995 season led to him being called up by the Pirates, skipping over Triple-A. There was a trivia question that I’m sure was much easier to answer correctly back when these cards came out. The 1995 Pirates weren’t that good or exciting. I read the trivia answer first before seeing the question, but I’m sure I would have had a few guesses before getting it correct.

Here’s an interesting non-baseball thing I noticed. Look in the stats at the abbreviation of the word “totals”.  Most people just use “tot.” if they abbreviated that word, but many others don’t abbreviate words for no reason. There was plenty of room for three more letters. It probably has to do with continuity in the set, so it just looks odd here. If some pitcher had 10+ seasons and 100+ wins, you’re adding three more numbers to that bottom line, so ttls became necessary…or just don’t include it because I don’t think the concept of career stats would be confusing to any baseball fans without it.

It might be surprising to find out that it’s just as easy to find a Silver Signature version of Parris, as it is to find the base card. The reasoning behind that is desirability. The Silver cards aren’t impossible to find, but you’re much more likely to find a buyer for one than you are for an average common card like Parris. There really isn’t a price difference between the regular version and the Silver, mostly due to shipping charges. You can get either for around $3 delivered. There is one Gold Signature on Ebay for around $8, and there are two autographed versions (not factory) and they’re going for $6 and $16.50. One of those prices is a much better deal. Happy collecting.