I have a bad habit with these articles and I’m not really trying to work on it either. It’s not overdoing the Topps Heritage cards either, because that’s not a bad habit. The habit is searching for a card of a particular player and then ending up using a card that has other players on the card as well. I had tons of choices for Garrett Jones to use here today. The Pirates signed him as a minor league free agent on this date in 2008. This is his first time in the Card of the Day series, so I could have picked any card showing him on the Pirates. I almost picked a different Heritage card too as I scrolled through Ebay auctions, but I tried not use some other set…until I saw a different Heritage card of Jones and Andrew McCutchen. I stopped scrolling at that point and started writing…well, I got scans to use first, then started writing. Here’s a look at card #250 from the 2010 Topps Heritage set featuring Garrett Jones and Andrew McCutchen. 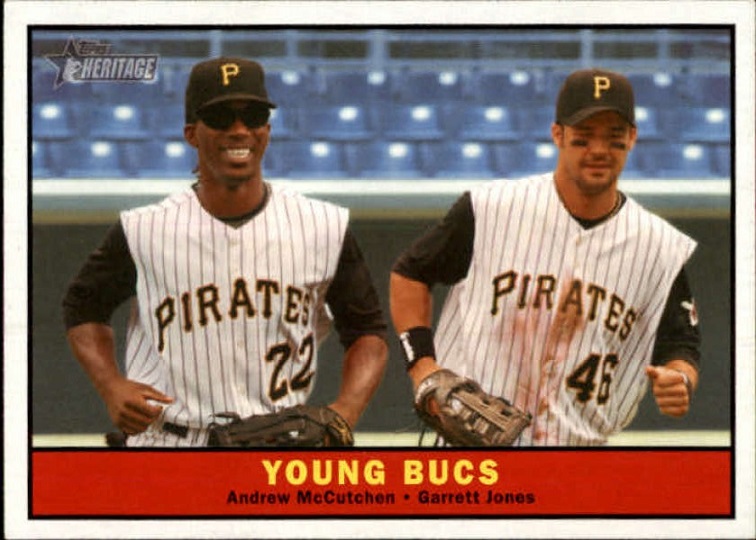 Before you read the next sentence, look at that card and try to figure out what really stood out to me the first time I saw the card? Go ahead and look, then read the rest, I’ll wait…

These 2010 Heritage cards used the 1961 Topps design. That was the odd decision they made of matching up cards that were printed 49 years apart, so it was 50 years total if you included both years. When they first started coming out I thought the set design/year was random, but it was planned that way, almost as if they had the idea for the set and couldn’t wait another year to use it. The strange part was that it took away the surprise of seeing a new set, but I still couldn’t wait for the 2011 set to come out because it featured the 1962 design. 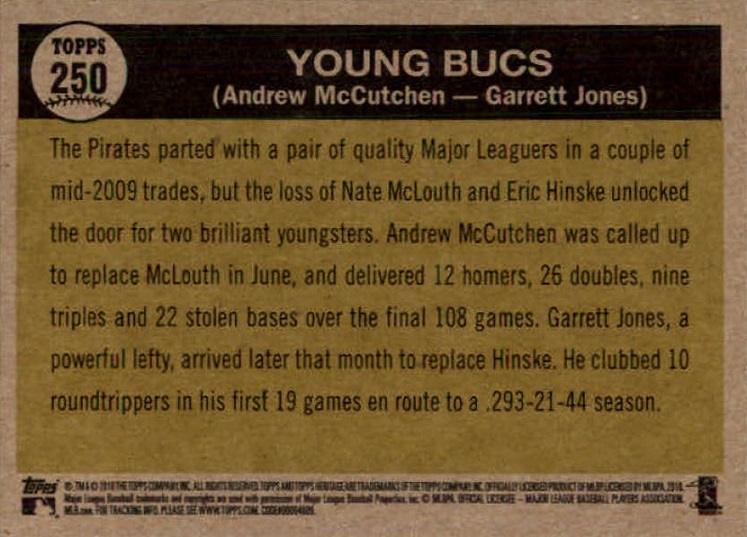 The back tells you of the exploits of McCutchen and Jones during the 2009 season, when they got called up mid-season after the trades of Nate McLouth and Eric Hinske opened up spots in the outfield. Both “young bucs” did well after getting the call, though Jones was already 28 years old, so that really doesn’t qualify as young in baseball terms. Age 28 is thought of as the start of the prime years (28-32 years old), though that obviously doesn’t work for everyone. It’s more of an average age stat. Just like with the front, the back is using the 1961 Topps design.

One of the best parts about doing this article is finding cards I’ve never seen before, then buying the lowest priced one before telling readers the price range. I’m sure I’ve seen this card before, I just don’t remember it, but I’ve looked at a lot of cards over the years. This is a great card, but the price reflects the ease in which you can find cards from this set. I just bought one for $1 delivered, which was actually $1.07 after tax. You can get one for around $2 delivered, or a little more if other readers got the cheapest ones before you. There are two auctions of note. One is signed by both players (in person, not factory) and it’s going for $45 plus shipping. Then there’s one for $190 that is signed by both players (in person). The difference between them is that the second one is authenticated by a card grading company. The easiest thing to do is closely compare the authenticated signatures with the others and if they match up, then you should be good. The grading part will just help with the resale value, but it’s not worth $145 (at least to most people, to you it might be).