Today’s Card of the Day comes with an interesting note that was included in the title. Woodie Fryman began his career with the Pittsburgh Pirates and he played 18 years in the majors. Most of his time came after the Pirates traded him away in the deal for Jim Bunning that went awful for Pittsburgh. As the trade worked out, giving up Fryman alone would have been a one-sided loss for the Pirates, but he was just the second best player in the deal, with All-Star third baseman Don Money making it one of the worst trades in team history. Fryman didn’t have many cards with the Pirates, but he had a great one from the 1967 Topps set, which called him Woody, though he preferred the spelling to be Woodie. His first name was Woodrow, so either way it was just a choice, sort of like current Pirates pitcher Wil Crowe. His first name is William, so he just chose to use one L. Anyway, here’s a look at the 1967 Topps card of Woody “Woodie” Fryman. 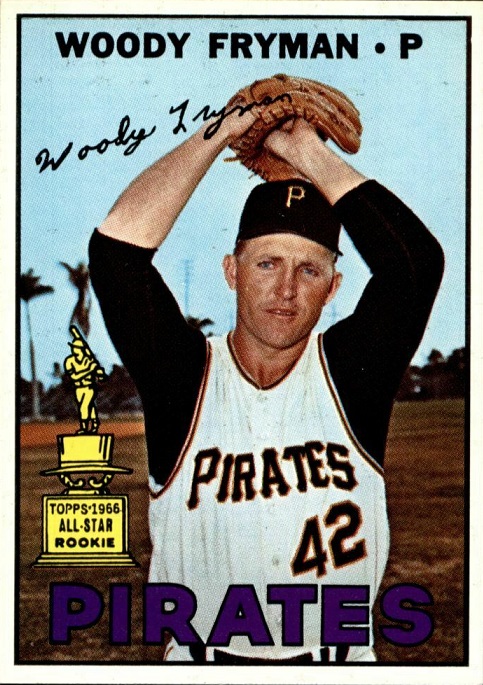 I started collecting cards at a very young age and had an immediate interest in cards that were much older than me. Some of the cards from Topps before my time had trophies for players who were selected to the Topps All-Star Rookies team. As a young card collector, I assumed all of these cards had extra value. I was wrong, but the trophy does add a bit of eye appeal to the cards. I’m still a fan of the rookie trophy cards, and therefore I’d be willing to pay a small premium for them, which isn’t necessary as you will see in the pricing section below.

For 1967, Topps went away with some of the border design and just decided to go with a bigger picture of the player, though they added the team name/player name/position into the photo, so it took away some of that bigger picture. They added a facsimile autograph, which is interesting because it says “Woody”.  I’m not a huge fan of the 1967 Topps design, but I can live with it, and I actually like how they handled the two-player rookie cards and the league leaders. My favorite sets from the 1960s are 1962, 1968 and 1960 in that order. 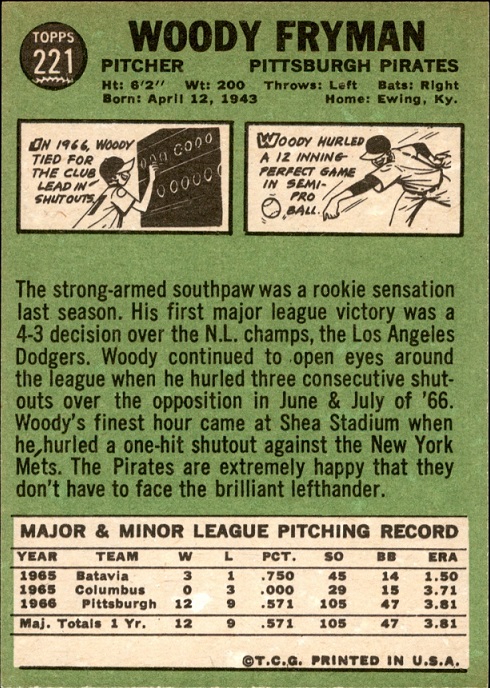 As you can see, Fryman flew through the minor league system, though he didn’t sign until he was 25 years old. You might look at that card and say that I’m wrong because he debuted in 1965 and his birth year is listed as 1943, but he lied about his age before signing with the Pirates. He pitched a total of 64 innings in the minors, then pitched another 2,411 innings in the majors before retiring.

The last note in the bio section is an interesting one because Fryman ended up spending all but 2 1/2 seasons in the National League after the trade, so the Pirates saw him a lot, which begs the question about how they performed against him. He had a 3.82 ERA in 221.2 innings against the Pirates. He only faced the Cardinals more often, but he had a better ERA against five NL teams. I guess the most interesting note is the opposite of that last line. His worst ERA against an NL team was against the Philadelphia Phillies, the team he saw the most work for in his career, so he was glad that he didn’t have to face the Phillies during that time.

If you’re interested in this card like every good Pirates fan should be, then call up an Uber and have them take you to Ebay, where you can get a 1967 Woody/Woodie Fryman for as little as $2 delivered. At the time of this write-up, there were 63 active auctions for this card. There are three autographed cards for sale, all around $20-$25, but it’s a tough decision here because there isn’t a good spot for autos on this card with some much going on, so all three have him writing dark blue ink into the black jersey at some point in his name. The most expensive auction is going for $80 and it’s graded an SGC 96, which is the same as a PSA 9. I usually don’t tell people not to get specific auctions, but for reference, an SGC 96 recently ended on Ebay for just under $35 delivered, soooo….