On this date in 1998 the Pittsburgh Pirates traded pitcher Jon Lieber to the Chicago Cubs in exchange for outfielder Brant Brown. It was a trade that did not work out well, though it could have been much worse if Lieber didn’t get injured and miss an entire season, plus part of another season. He debuted with the Pirates in 1994 and saw a decent amount of time in their rotation over the 1994-98 seasons, while also getting some time out of the bullpen. Lieber hasn’t been featured in this series yet, so I had plenty of cards to choose from for this article. I went with an autographed card from the 1996 Leaf Signature set, from the Extended series of that set. The set was offered in two series split into the Signature series and Extended series. We have featured one Signature series card here, looking at the card of Charlie Hayes, father of current third baseman Ke’Bryan Hayes. Today’s card is the first from the Extended series. 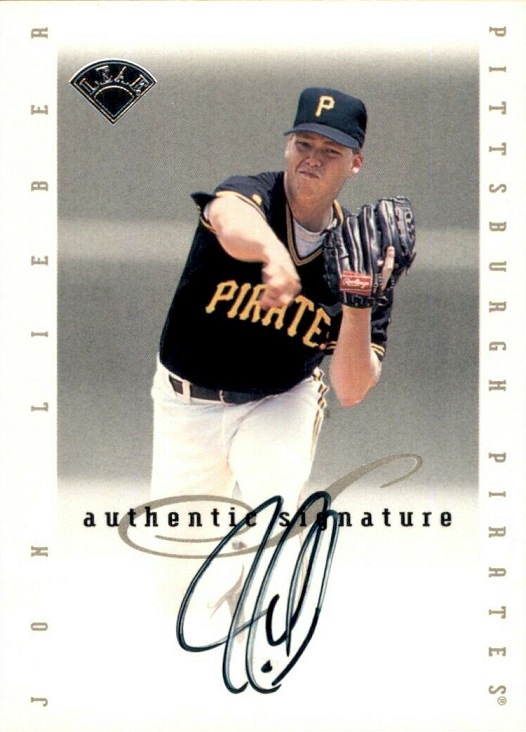 Leaf had most of the players sign 5,000 cards for this series. That’s a lot of writing for some people, but when you’re just making random shapes in place of your signature, then you can probably get that done within a few hours. If you saw that signature on a blank piece of paper and I asked you to name which player from the Pittsburgh Pirates signed that, while giving you a list of every player in their history, some of your would get into four digits with your guesses before getting it. Why is there a dot in there? I’ve stared at that way too long and I can’t even see what he was going for because there’s nothing resembling a letter. I changed my mind on the guessing part…how many of you would see that on a blank piece of paper and know that it’s an autograph?

I’m not a big fan of the top to bottom writing on these cards, so let’s find something that I like on this card (I actually like the series idea when the autographs look like human names). It’s a good action shot of Lieber, though I think the back one is better. I also like the Leaf logo on the card, putting the name in the outfield of a baseball field like that. Yeah, I’m reaching for straws here…. 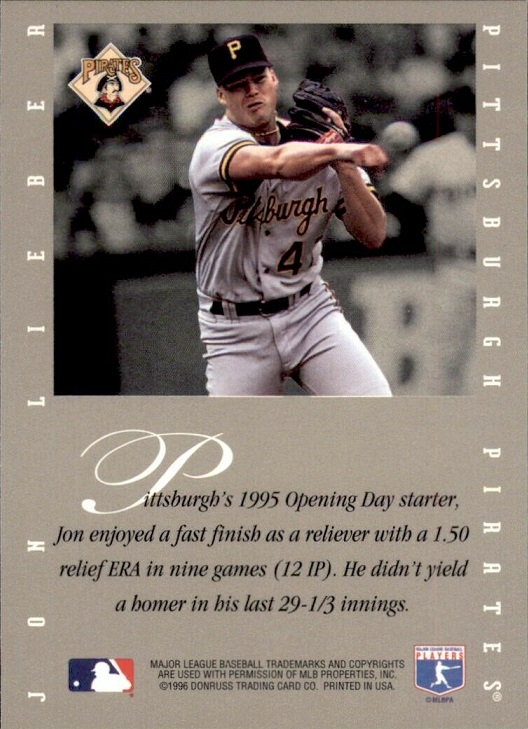 I like the back a lot better, but there’s really not a lot going on here, just an extra picture and two quick stats. They included the Pirates logo from that era though and it’s a great one. I like the gray background look, with the opposite writing/background colors from the front of the card.

What’s interesting here is that there’s nothing telling you the autograph is authentic. Sure it’s written on the front, but usually cards come with a little hologram and/or congratulations on getting an autograph. No numbers either, so you just have to trust that there are 5,000 of them.

If you’re interested in this card, I’d be shocked. It looks like a little kid defaced a normal card. The only way I’d get this is if I was collecting the entire set. So let’s pretend that is your motivation and look at prices. This is easy to find on Ebay (meaning volume, not that it could possibly be hidden). There are 24 examples for sale right now, ranging from $14.49 for the highest one, down to $2.25 for the cheapest, and that comes with a best offer. If someone beats you to that one, then the next cheapest is $3.39, so get to Ebay as fast as Jon Lieber draws circle art if you don’t want to overpay.