If I’m not going to feature Josh Fogg here on December 13th, then I’m not going to feature him here at all. Today is not just his 45th birthday, it’s also the date that the Pittsburgh Pirates acquired him from the Chicago White Sox in 2001. Fogg was a starting pitcher for the 2002-05 Pirates. Along with Kip Wells, who was also acquired in the trade for Todd Ritchie, they made up 2/5th of the Pirates rotation during that four-year stretch. It was a deal that worked out great for Pittsburgh, as Ritchie struggled after leaving, and the other player sent to the White Sox (Lee Evans), never made the majors. The Pirates also got Sean Lowe, who only did well in comparison to Ritchie/Evans. Basically, the Pirates got two young starting pitchers for nothing, as the Lowe vs Ritchie/Evans portion of the deal was a dead heat.

This is the first time for Fogg, so I had plenty of cards to choose from for this article. You play four full seasons with a team in the early 2000s and you’re going to have a lot of cards. I picked the 2005 Topps Heritage set mainly for the look, but also for the fact that in yesterday’s article for Jose Osuna, I noted that I try to avoid the Topps Heritage sets. I didn’t try here, and in fact, I actually wrote these articles back-to-back on the same day, so you’re talking about 500 words or so before I completely went back on what I just wrote. You won’t be disappointed though, as the 2005 Topps Heritage set uses a great design for their card. Here’s a look at card #159 from that set. 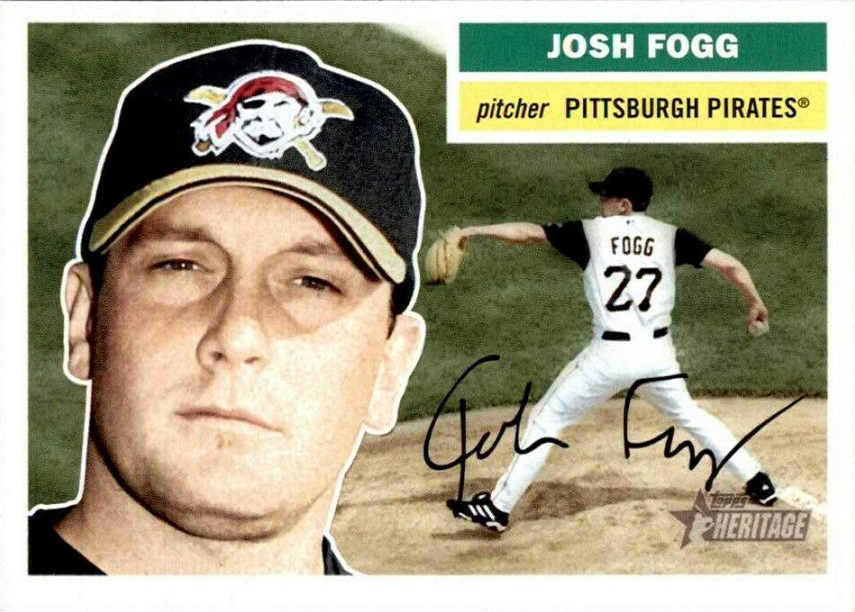 Look at that 1956 Topps design on a much newer card (insert the emoji with the hearts for eyes). I’m a huge fan of the 1956 Topps set, so I’m going to like it on newer cards too. I like 1955 Topps card design, which is basically what you see above, but with a solid color background. I couldn’t imagine the excitement of ripping into a pack of 1956 Topps for the first time and seeing that they improved on a great design. The horizontal layout for every card was also a great idea, especially with the full game action background. Two things in particular I like here. The hats they wore that year, and the picture choice for the background shot, where you can see the “Fogg 27” on the back of the jersey clearly. Excellent work, Topps. 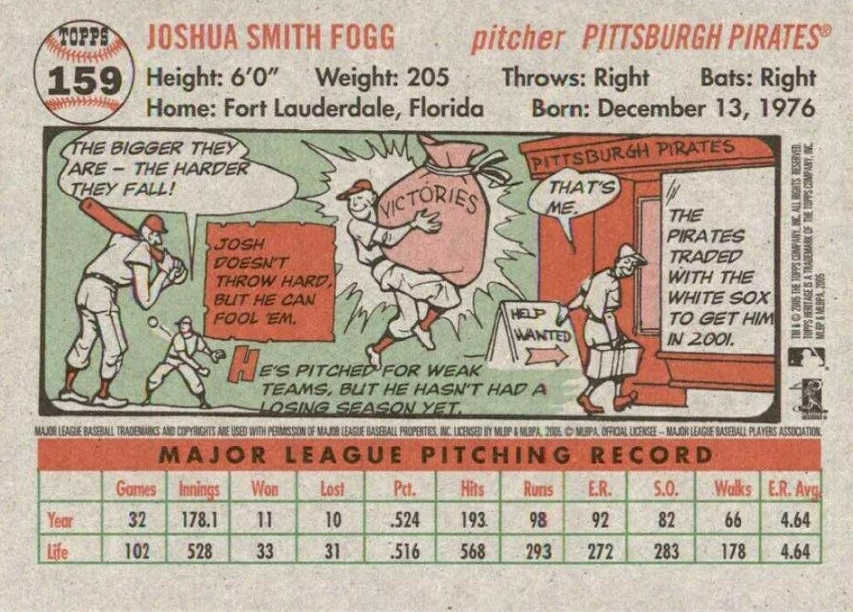 The 2005 Heritage set also used the back design from the 1956 Topps set, doubling up on the fun. With the return of this back, you also get the return of the famous generic gray Topps man, who looks like no one ever, but he can represent everyone in baseball. These cartoons let you know that Fogg was a crafty lefty who threw from the right side. In the center cartoon, they take a swing at the Pirates, while putting the jinx on Fogg, who finished with a 6-11 record in 2005.  They also mentioned his trade in 2001, but failed to note that it happened on his birthday. Just like in 1956, they went with the last year of stats and career stats only.

This card is a common that is fairly easy to find, though only 18 auctions are currently up on Ebay, which is lower for this time-frame. Only two auctions are noteworthy and that’s because they are both autographed. It’s interesting to see, because the front of the card already has a facsimile autograph, so adding a second one makes it look a little cluttered. You can get the regular version for around $2-$3, while the autographs are going for $5.50 and $4. I would actually recommend the more expensive one if you go that route because the cheaper one has the autograph on his face.