Today is the birthday of Jose Osuna, who spent the 2017-20 seasons with the Pittsburgh Pirates before heading overseas to Japan, where he helped his Yakult Swallows team to a league title this year. I decided to feature Osuna here for the first time today and I had all of his cards to choose from for the article, including some great offerings from Topps Heritage. I’m trying to stay away from those for a little bit because I feel like I always gravitate towards them for newer players. They’re my favorite cards, I can’t help it. So instead, I went with a card that celebrates an accomplishment from Osuna, along with his teammates from the 2017 Topps Now set. My thinking was that I just saw photos of him celebrating his title with his teammates in Japan, so why not feature a card with him and his teammates from the Pirates. Let’s get right into the photo so I can better describe this particular card that also features David Freese and Jordy Mercer. 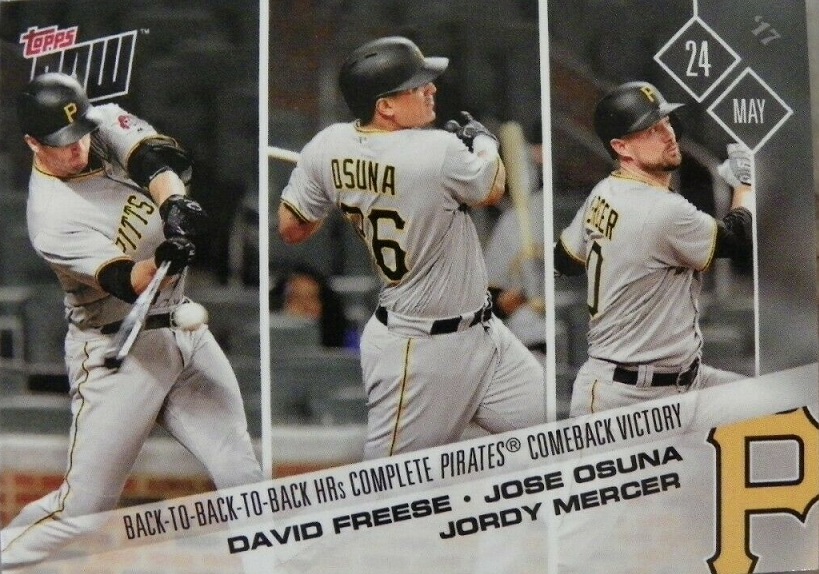 On May 24, 2017, the Pittsburgh Pirates got consecutive home runs from Freese, Osuna and Mercer in what turned out to be a 12-5 win in ten innings over the Atlanta Braves. After the win, the Pirates had a 21-26 record on the season, putting them 4.5 games out of first place. The photos you see above were all from the swings that produced the homers, which is one of the calling cards of the Topps Now set. If you don’t know about it, the “Now” part of the name is quite literal. Players do something significant one day, then the next Topps uses a photo from that event and produces a card that is for sale for 24 hours. At the end of 24 hours, however many cards sold during that time equals the exact number of cards that they print. This card was purchased 366 times, so 366 cards were printed, making it much harder to find than any common card from a regular Topps set. The scan here doesn’t do the card justice. The Topps Now cards are high quality photos and I’ve purchased a number of them over the years. 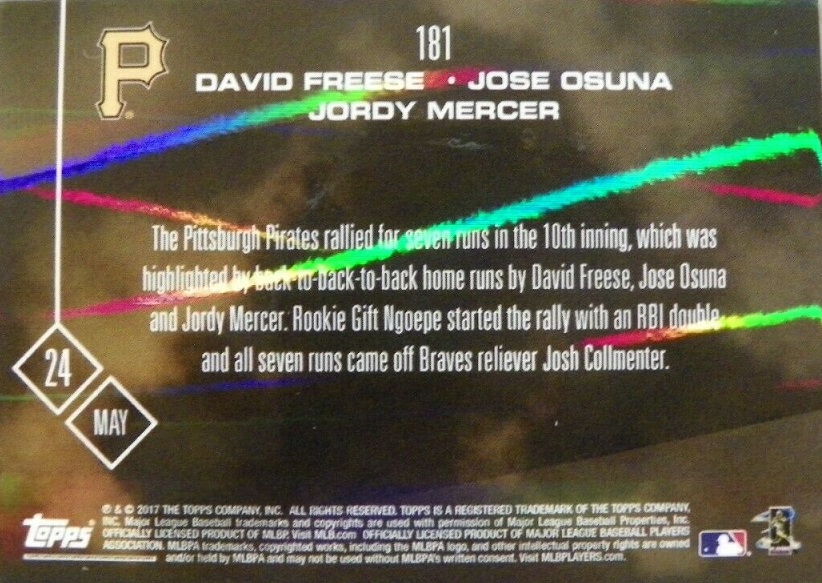 Getting a good back scan here was a bit tough because the angle of the card creates different reflections/highlights in the background of the card. The Topps Now backs are rather simple though in what they include. You basically get a brief description of the event pictured on the front. I purposely left out a few details about the homers in the description above so you can see that the homers were part of a seven-run inning in the tenth. They represented the final four runs of the frame in which Andrew McCutchen actually got things started with a pinch-hit single, then struck out to end the inning. How often do you see a pinch-hitter bat twice in the same inning?

I have to mention quickly that I appreciate Topps getting the Pirates logo on both the front and back of these cards. Even though I’m not a fan of that particular logo, it’s only bad in comparison to some of the great ones the team has had in the past.

As a second side note, this is card #181 because it’s the 181st card that they printed for the 2017 season. There wasn’t a set amount of cards to print, though they usually limited it to 2-3 per day.

This card originally cost $9.99 to order, but you got discounts for order more copies. What I’ve always done is buy the card from someone off of Ebay, who bought in bulk. Usually I paid around $5 delivered. If you order one from Topps, you get a better holder for the cards, but that’s it. The only time I bought a Topps Now card from Topps was for a charity listing that they had a few years back. As for this card now four years later, there are seven auctions on Ebay right now and the lowest ones are about $5 delivered, while a few are $5 plus shipping, so just watch that in case you want to buy one. You might end up paying double for nothing extra.