I have sounded a bit like a broken record recently as I keep finding players who haven’t been featured yet in our Card of the Day series.  We are up over 500 articles, and I’ve repeated numerous players during that time, but you would think by now that I have run out of significant players who haven’t been here yet. Then today rolls around, with Jay Bell turning 56 years old and I see that he hasn’t been here yet. He gets on the interwebs today and checks out this series already saying in his head that it better be the day he receives his first Card of the Day feature. At the same time, the person who came up with the winning design for the 1990 Fleer set is also checking out this site and they are basically saying the same thing, while muttering something bad about me under their morning breath. Well you can both sit back and enjoy the day, because today’s featured card is a 1990 Fleer Jay Bell. 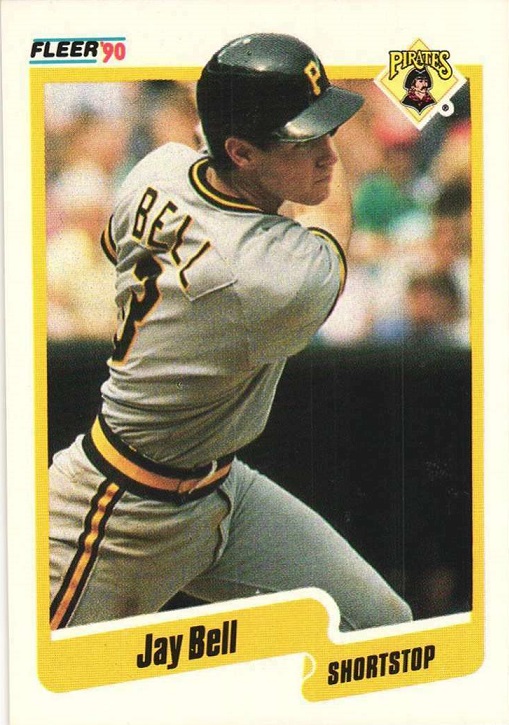 In 1990, Fleer used team colors in the front design of the cards. Some were based off of the logo, such as using red for the New York Yankees, who didn’t have any red in their uniform, but it was the main color in their logo at the time. The Pirates players had gold around the photo and they used black for the writing. If you have learned anything about me from the previous 500+ article, it is that I love when the set design uses the team colors. They don’t have to if it looks like the 1962/1987 Topps borders, but I much rather prefer team colors than those off-colors for each team. I’m looking at you 1965 Topps (yes, I know I looked at you recently, but I’m doing it again).

This is a nice in-action photo of Bell at the plate with the cool road grays of the era. The front has one other detail that I love love love. They included the team logo from that year in the upper right hand corner. I have no idea why they didn’t include logos some years, though Fleer was good at including it, so it was mostly other sets occasionally not using it. At least for the Pirates logo, it should have been standard. 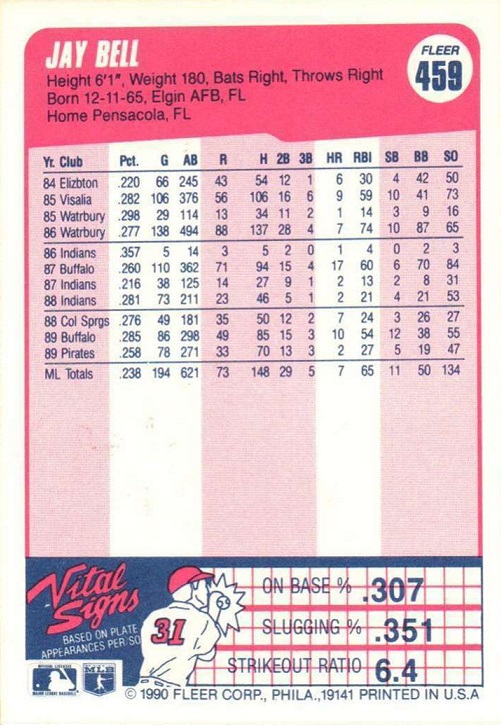 Is there any other card that has such a big difference in the look front the front to back. These scans don’t look like they could possibly match up for the same card. That’s only partially due to the front having a glossy feel, while the back lacks that attribute. You have those bright colors on the front and the dull ones on the back that look more like they’re trying to sell you cotton candy. I like how you can see the evolution of stats on the back of cards by looking at the vital signs at the bottom. Slugging percentage and OBP weren’t main stats at the time. They were special added stats, matched up with strikeout ratio, which never caught on for cards. What’s the point of the boxes in that section between the thicker separation lines? We like adding things, but also making them slightly harder to read…

That batter drawing does not look like a swing from a left-handed batter. It looks like he’s sticking the bat out and somehow still made huge contact anyway. Such a strange drawing for someone to sign off on, like they never saw anything on the other side of baseball cards.  I like complaining about designs from 31 years ago, mostly because I know I couldn’t come up with better artwork, even if I think I have better ideas (insert smiley face here). One other note that isn’t a complaint, and that’s the fact that Fleer continued their racing strip theme on the back for stats so you can read them quicker.

These cards are very common, being printed at the height of the card boom. There are 59 examples of this card on Ebay and it was apparently a popular card to get autographed. You have about ten choices, and they go as low as $5-$6 each delivered. If you just want a regular card, you have about ten choices for under $2 delivered. The only other auctions of note are two rack packs that are unopened and have Bell on top. They can be had around $5 delivered and you’re getting plenty of other cards if you decided to open it (I wouldn’t).