On this date in 1976, the Pittsburgh Pirates traded outfielder Richie Zisk to the Chicago White Sox in a four-player deal, with Goose Gossage being the main return for Pittsburgh.  Three years earlier, Zisk appeared on his second rookie card for Topps. That first is considered to be his actual rookie card, and he’s pictured alongside Pirates pitcher Fred Cambria. That card was featured here almost one year ago on Cambria’s 73rd birthday. That card was a Pirates rookie card, but in 1973, Zisk ended up on the rookie card for outfielders around baseball, this time pictured alongside Rich Coggins of the Baltimore Orioles and Jim Wohlford of the Kansas City Royals. Today we take a look at the three of those players to see why Topps picked them at the time and how they performed in their careers. 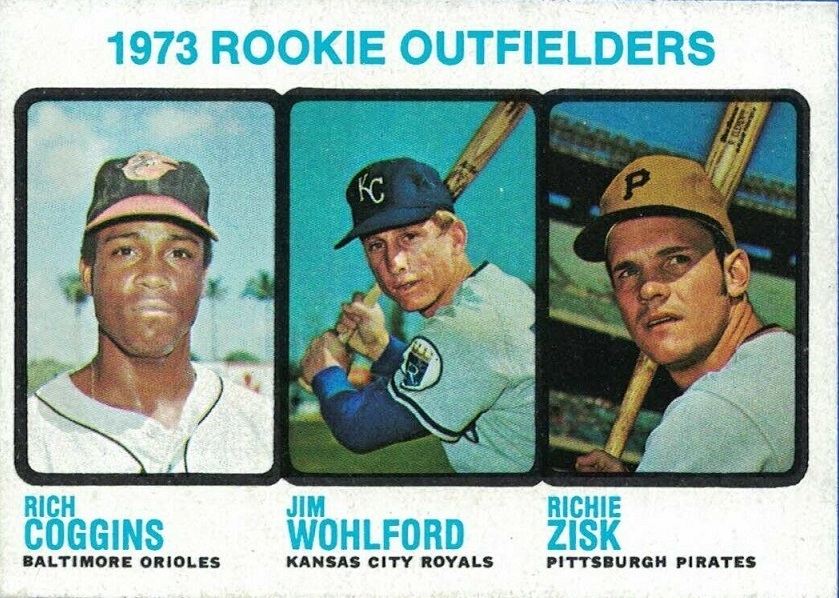 The 1973 Topps cards had a rather bland design on front and the back had an awful color for the background (see below), but the rookie cards had a little extra color with the blue writing at the top for 1973 ROOKIE OUTFIELDERS. The player names throughout the set were in different colors. All of the Pirates players had their names written in orange on the solo player cards, but the rookie cards all used blue writing for everyone. That subset of rookie cards had some All-Star players like Zisk, Dwight Evans, Bob Boone, Gary Mathews, but the most popular card by far features Mike Schmidt and Ron Cey. 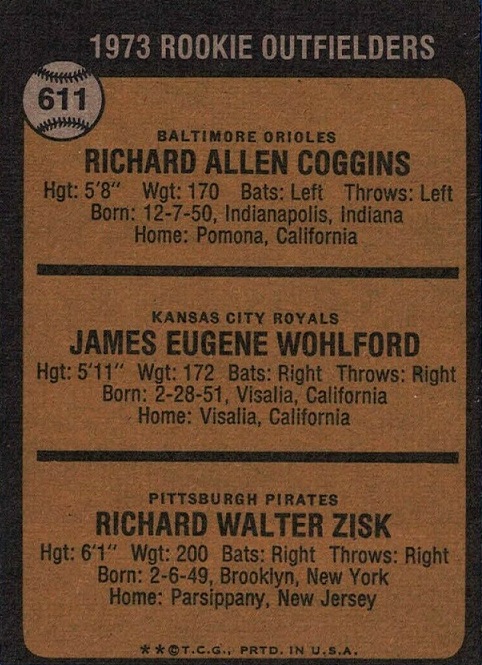 I wanted to look at the back first to show the only clue about the possible prospect status of these players. If you were getting these cards in packs before the interwebs, there weren’t many places to find information on minor league players. In later years, Topps helped out a little by telling you the draft status of players. At least with that, a first round pick will seem appealing. All this has is age though, so you see that Coggins and Wohlford were both 22 years old when these cards were being released, and Zisk was 24 years old, giving the advantage to the other two players. Zisk was the biggest player (in size) and Coggins was fairly small, but he could have been a speed player, so that didn’t help much.

I’ll start with Coggins, who debuted in the majors in 1972 and hit .333 in 16 games, which is a pretty good sign/reason to include a player on a rookie card. His height/weight didn’t really give us a good indication of him as a player because he hit .322 with some power in Triple-A in 1972, while going 7-for-12 in steals. He looks like an excellent selection for this card based on those things (age/combined 1972 stats). He’s a really interesting case because he hit .265 in 342 games through five seasons, then didn’t play at all after age 25. He disappeared off the map at the end of 1976 to get married and a newspaper article titled “Where are they now?” in August 1978 was unable to track him down. A year later someone finally found him doing law work in Los Angeles. So he was putting up solid stats in the majors through 25 years old, then walked away from it. Can’t fault Topps for that. He was a good selection for this card.

Jim Wohlford is basically a strong selection by Topps, but he was never a star. However, he played 15 seasons in the majors, seeing a total of 1,220 games. Considering that very few players to debut each year can claim those stats, I’d say he was an excellent choice, even though he finished with a career 2.0 WAR. He was also a good selection at the time, getting to the majors in his third season of pro ball by being a .300 hitter, with a little pop/speed in the minors. He debuted with the Royals in 1972 and hit .240 in 15 games.

We know Zisk, but just a refresher of where he was at the time the 1973 Topps set was coming out (I’ll note that it was released in series, and these cards came out later in the year). Zisk played briefly for both the 1971 and 1972 Pirates, hitting under .200 during that time. However, he put up big minor league stats at Triple-A each of those seasons, with a .953 OPS in 1971 and a .969 OPS in 1972. He was a good choice, who panned out as a star player for a time in the majors. He was a two-time All-Star who put up solid/strong stats during his 13-year career, finishing with 207 homers, 792 RBIs and a .287 average in 1,453 games. He was a .299 hitter during his time in Pittsburgh. Excellent choice at the time by Topps, and it worked out as you would hope.

So basically this set had three excellent choices and three different outcomes, with an All-Star player, a 15-year average big leaguer, and another player who was decent until he decided to retire with zero notice at 25 years old.

If you’re interested in this card, there are 46 options on Ebay, not including the O-Pee-Chee versions. The highest priced ones are autographed by Zisk. They go for $56, $40 and $25 each. You can get a PSA 8 for $28.50, which seems like a good deal to me. The lowest priced one is going for $7.40 delivered, and purely by coincidence, it’s the one I used for the scans. The high numbered cards from 1973 Topps command a premium, so the added cost comes from scarcity.